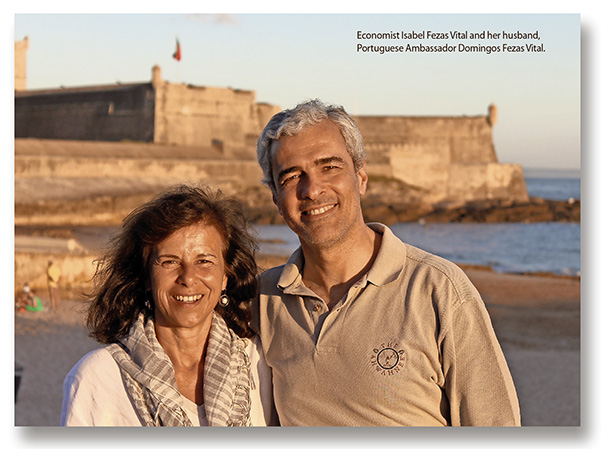 Isabel Fezas Vital goes by the numbers — when it comes to her profession and lifelong passion. “I knew I wanted to be an economist. I was always sure. I liked math from the time I was little. As an older student, I liked macroeconomics best. I’m lucky I knew. So many people don’t know what they want to do, what they want to study.”

Fezas Vital, wife of Portuguese Ambassador Domingos Fezas Vital for 33 years and mother of their two grown sons, has worked as an economist for most of their diplomatic life together.

Among her jobs, she has worked at the Portuguese Ministry of Foreign Affairs on common trade policy and the implementation of free trade agreements. She also served as head of the Asia Oceania and Africa Division at the ministry, where she helped formulate Portugal’s positions on FTAs with South Korea, India and ASEAN, as well as a partnership and cooperation agreement with China. Her final posting before coming to Washington was with the European Commission’s Directorate General for Trade in Brussels, where Fezas Vital focused on trade dealing with the specific sectors of pharmaceuticals, tools and cutlery.

It’s fitting that Fezas Vital — who earned her postgraduate degree in European economics from Lisbon’s Portuguese Catholic University — chose economics as her career path, given Portugal’s own turbulent economic journey and dramatic turnaround. In 2010, the country was sucked into the eurocrisis and forced to take a $90 billion bailout with harsh austerity strings as joblessness surged and hundreds of thousands fled the nation of 10 million.

But after a new government in 2015 reversed some of those austerity measures and continued to enact much-needed structural reforms, the economy rebounded (also see “Bucking Austerity, Portugal’s Socialists Bring Economy Back from Brink” in the June 2018 issue). Unemployment was slashed and the economy has continued to grow above the European Union average — driven largely by tourism and investment from China and elsewhere.

While Fezas Vital understands the economic travails and triumphs perhaps better than most, she hasn’t been called on to use her economic skills in Washington — but rather her diplomatic ones.

“Here in Washington, I have no time to work,” she told us. “Immediately when we arrived, I had 1,000 things to do. Your society is so lively and dynamic that days are very busy. Now I don’t know how I would have time to work.”

Fezas Vital said that among other things, she keeps busy with a monthly book club for diplomatic spouses and monthly lunches with other EU spouses.

“I have lots of invitations to cultural events and museums. I love museums and you have so many good ones in Washington. Of course, our own embassy functions are very important to me,” she said. “Every day goes by very quickly here. In Washington, there are so many things to discover, so much to do. I like having the opportunity to be part of the conversation. I am curious about multicultural places.”

Her husband also appreciates D.C.’s multicultural character. A fan of all kinds of music — jazz, pop, classical — he enjoys going to concerts and the theater. He himself has a multicultural background, having been born in Angola, a Portuguese colony at the time and the country where his father worked, returning to Portugal and then growing up as a teenager in Angola again and Brazil.

He was also posted to Macau when the territory known as the “Las Vegas of the East” was formally handed over from Portuguese rule to Chinese rule in 1999, marking the official end of what is considered to be the longest-lived colonial empire in the world. (A few years earlier, his wife served in Macau’s Office for Trade Affairs in Brussels.) After that, Domingos Fezas Vital worked as Portugal’s permanent representative to the European Union at the height of the eurozone crisis before coming to Washington in 2015. 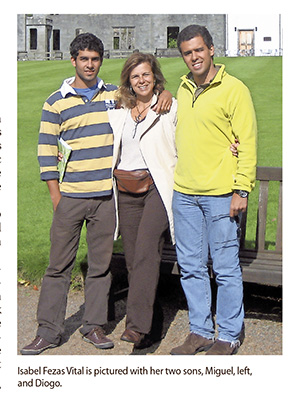 Although this is her husband’s first assignment in the U.S., he and his wife have been here many times on official trips for the Portuguese Foreign Ministry.

As a family, they came to the U.S. on vacations. “We took our sons to California on our first trip and to New York City and D.C. the second time,” Isabel Fezas Vital told us.

“The first time, we flew to San Francisco with another family who also had two sons. Our boys were 10 and 12 then. We rented a big car at the airport and drove all over for two weeks. We drove down the coast to Carmel, went to L.A. and saw Disneyworld, of course, and your big movie studios. Then we went to San Diego, where there is a large Portuguese community. Many Portuguese fishermen immigrated there as they did along the coast of New England,” she said. “From San Diego we drove to Las Vegas, the Grand Canyon, Lake Tahoe and Yosemite. We were four adults and four boys. We had a wonderful time. The second trip was during New Year’s Eve. In New York, we went to see Times Square during the day and celebrated New Year’s Eve by walking in Central Park. The boys were teenagers then.”

Today, their sons are 32 and 30. Diogo is an economist in London with J.P. Morgan and regularly commutes to see his wife Margarida in Madrid. She is with Uber, and he hopes to move to Madrid soon to join her. Miguel lives in Belgium and works in human resources.

For Christmas, everyone meets at the family home in Lisbon. “For us, Christmas is less about giving presents and more about being together,” Fezas Vital said. “We usually celebrate with our relatives and several other families who are our friends. My mother always brings Bacalhau, a dried and salted codfish that she has soaked. My sister-in-law brings King Cake, which has crystallized fruit and pine nuts. In my childhood, there was always a small toy hidden inside.”

For gifts, she told us, “I have my sons’ and nephews’ measurements. Young people in Portugal like American brand names like Ralph Lauren, Converse, Nike and Levi’s. They may find them in Europe but they will be more expensive.”

While many Portuguese are familiar with American brands and culture, more and more Americans are now discovering Portugal’s treasures thanks to a boom in tourism.

“My goal while I am here is to present Portugal to everyone — the best of Portugal, to visit, to study and to live there,” Fezas Vital said. “Now, Americans are very curious about Portugal.”

Located on the Iberian Penunsula, nearly 13 million foreigners visited the country in 2016 to see historic cities such as Lisbon and Porto and a wide variety of beaches. In fact, Portugal’s long western border along the Atlantic Sea has become the latest hotspot in the world for extreme surfing. This country’s archipelagos of Madeira and the Azores have also become popular destinations.

“Portugal has mountains and sea. If you drive for two hours, you can be in a totally different place,” Fezas Vital said. “Many people are attracted by our style of living even though we don’t eat until 9 p.m.”

The laidback lifestyle, picturesque scenery and rich culture have drawn average tourists and big names alike. “Madonna lives in Lisbon, the old town, and her kids study in schools there…. French interior designer Philippe Starck and French shoe designer Christian Louboutin both have Portuguese homes,” Fezas Vital noted. “Many other foreigners prefer Cascais, the lovely sea village just outside of Lisbon. People are able to live there and make the short commute to work in Lisbon.

“Our nice hotels are not expensive and you can eat well,” she added. “Many Americans are buying properties. We are welcoming foreigners with special tax rates. American retirees are coming over with their pensions and retirement savings. They are attracted to our rich culture, which goes back almost nine centuries, our fado — haunting music sung in an intimate venue — and our very good food. We have fresh fish, of course, wonderful olive oil and Mediterranean cuisine. Our Port and Madeira wines are world famous and our red and white wines are highly regarded.”

In fact, after signing the Declaration of Independence, America’s Founding Fathers toasted the country’s hard-won independence with a glass of Madeira wine. “Portugal was the third country to recognize the independence of the United States,” the ambassador told us in a June 2018 interview, describing the U.S. as Portugal’s “neighbor across the ocean.”

“I am very proud to be Portuguese,” the ambassador’s wife told us. “Portugal is one of the oldest nations in Europe with one of the oldest universities, the University of Coimbra. In school, we studied our long history and the history of the world.”

That history dates to long before America’s founding and encompasses a global empire that stretched from Africa to Asia to South America.

In fact, after highly successful seafaring exploration during the 15th and 16th centuries, this small kingdom became the largest empire in the world. As a result of this expansion by sea during the “Age of Discovery,” Portuguese is spoken not only in Brazil but also in southern India, Macau, Angola, Cape Verde, East Timor and Mozambique, among many other places. In fact, Portuguese is the sixth most widely spoken language in the world, with some 300 million Portuguese speakers spread out across the globe.

That includes 1.5 million Portuguese natives who live in the U.S., split roughly between the East and West Coasts. Because of the country’s enduring global footprint, Portugal has a special cabinet secretary in Lisbon who serves as the liaison to these communities of Portuguese descendants.

“In comparison to Spain, our Iberian Peninsula neighbor, we are much smaller and much older,” Fezas Vital said. “Yet today’s Portugal is lively and young at the same time. We have a rich history, both on land and on the sea, and our borders are very well defined; they never changed. In fact, at one point, we were part of Spain for about 60 years, or three generations. Now we are independent, good neighbors.”

That neighborly vibe extends all the way to Washington, D.C. “We often get together with the Spanish ambassador and his wife here. We have so much in common. A new Spanish ambassador and his wife recently arrived and we have already met them,” Fezas Vital said. “There is a real connection between Portugal and Spain. It is so easy for us to be together even if we didn’t know each other before. This Spanish ambassador speaks perfect Portuguese; he sounds just like me. I understand Spanish but don’t speak it fluently. When we are all four together, we mix it all up — Portuguese, Spanish and English, all at the same time!”

Fezas Vital said that she and her husband, as well as Portugal itself, are fortunate to have such wonderful neighbors, both near and far. “Our closest neighbors are Spain, and on the other side of the Atlantic, the United States. We have very good relations with both.”