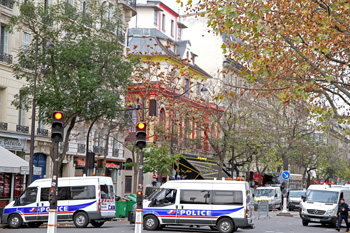 As Islamic State extremists attacked Paris on Nov. 13, a former French protectorate was already mourning a similar attack from the day before. The coordinated assault on a concert hall, soccer stadium and a string of cafés in the French capital killed 130 and wounded over 350, while multiple suicide bombers struck Beirut’s southern suburb of Bourj el-Barajneh, killing 44 and injuring 200.

French police gather evidence outside the Bataclan theater on Nov. 14, the day after Islamic State-inspired militants killed 130 people in a wave of coordinated attacks across Paris.

While the Paris siege monopolized Western media coverage over the following days, the Beirut bombing received scant attention. As Facebook released a tri-colored filter option for profile pictures and activated a safety function to locate French residents, many around the world asked why one group of people appeared to be more deserving of sympathy than others. For many, the Western media’s disparity in coverage was the primary culprit.

Some journalists and writers, however, like Vox’s Max Fisher, preferred to deflect the blame from the media and put the onus on news consumers. He pointed out that the Beirut bombings were extensively covered by major media outlets including the New York Times and Associated Press.

“Yet these are stories that, like so many stories of previous bombings and mass acts of violence outside of the West, readers have largely ignored,” Fisher wrote, recalling the difficulties he had getting readers to pay attention to the violence wracking Baghdad when he covered the height of the Iraq War in 2010. “But unless the victims are either children or Christian, I have never really succeeded in getting readers to care about such bombings that happen outside of the Western world.”

More than ever before, consumers dictate the news cycle. Social media trends largely define which stories get top billing, and content providers, i.e. media outlets, follow these trends to drive traffic and increase a story’s reach. News consumers and the media are connected in a self-perpetuating cycle.

The Western media marathon coverage of the Paris rampage was driven by multiple factors. In addition to being a Western country, France is one of the world’s most popular tourist destinations. Millions have posed for photos under the Eiffel Tower and walked the storied Louvre. News consumers in the West, generally speaking, have a stronger connection to Paris than they would to Beirut.

There may also be an element of desensitization at work, with many Westerners — wrongly or rightly — associating the Middle East with turmoil and violence. In contrast, spectacular terrorist attacks are still a rarity in a Western capital like Paris, whereas they have become routine in war zones like Syria, Iraq and Afghanistan. The exceptional nature of the Paris attack made it newsworthy, although such calculations are cold comfort to the residents reeling from the slaughter in Beirut.

Whatever the reason, statistics concerning coverage of the two attacks show a strong disparity.

As the data scientist Suman Deb Roy wrote in Medium: “In the first 30 hours, 443 media outlets wrote about Beirut at least once. Comparatively, 4,507 media outlets covered Paris during this time. We see a massive spike in the coverage within the first hour for Paris. In fact, within the first six hours, almost 40% of the domains that would ever cover the Paris incident had already posted about it.” 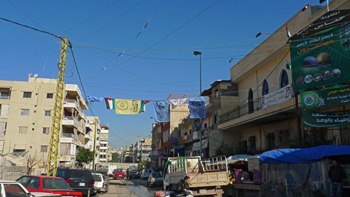 Bourj el-Barajneh in Lebanon, where an Islamic State suicide bombing killed over 40 people, is a bustling neighborhood that is also home to a Palestinian refugee camp, seen above.

Deb Roy also backed up Fisher’s assertion that consumers influence coverage, as evidenced by social media traffic in the wake of both attacks. “What we see looks disconsolate — attention for Paris in Twitter literally dwarfs attention on the Beirut bombings,” he wrote. “After an hour of both stories breaking, the highest attention received by links about Beirut bombings is just 5% of what the Paris links achieved in the same time.”

Jill Filipovic, writing Nov. 16 in Cosmopolitan, argues that the disproportionate focus on Paris over Beirut is not just a media problem, but an “audience problem.”

“We live in a world now where no one wants to pay for news. Newspapers are struggling, and foreign bureaus have been shuttering for years,” she pointed out. “We complain that we don’t see the reporting we want. But aside from an outraged Facebook status, many of us in the U.S. don’t actually seem to want the kind of reporting we claim to value — we’re overwhelmingly not paying to subscribe to the outlets that do good, in-depth reporting about places around the world.”

Part of this is an extension of proximity — “we naturally care more about events that are close to home and issues that more directly impact us. Media coverage reflects that, and to a degree, it should.”

At the same time, Filipovic acknowledged that Western media tends to place a higher value on Western lives.

“American media routinely covers, in much more detail, events that happen in the U.S. and Europe,” Filipovic wrote. “American media also routinely covers, in much more detail, events and issues that disproportionately impact white people and the wealthy. Our media routinely fails to give adequate attention to a slew of important stories, and what is deemed ‘important’ falls along complex lines of racial, economic, and regional hierarchy.”

The Sydney Opera House in Australia is illuminated in the colors of the French flag in a show of solidarity following the Paris terrorist attacks.

This hierarchy is connected to psychology. Even if a news consumer hasn’t been to Paris or Beirut, their brain might empathize more with Western victims of violence than non-Western ones.

“[Cognitive neuroscientist Emile] Bruneau noted that human empathy is largely driven by whether the victims of harm are ‘ingroup’ or ‘outgroup’ — that is, whether we perceive victims to be similar, or different than us,” Emily Atkin and Beenish Ahmed wrote at ThinkProgress. “This could be race, culture, or ideology-based. It all depends on the situation.”

Besides possibly relating more to the victims of the Paris attack, behaviorists theorize that Westerners feel ambivalent toward a region rife with conflict. Indeed, while tragedy can elicit sympathy, it can also breed antipathy. In the limited bandwidth of today’s fast-paced media cycle, people have grown numb to news of a bombing in Baghdad or Damascus. Even though Beirut has been relatively calm in recent years and suicide bombings are an anomaly, the country has experienced periodic bouts of violence, including a 2006 war with Israel and the reverberations of Syria’s civil war.

Here too, the uneven media coverage of various crises illustrates certain biases. For example, the massive refugee exodus from Syria that has overwhelmed neighboring countries like Lebanon has generated far fewer headlines than the migrant crisis plaguing Europe.

Shortly after the Beirut bombing, stories began circulating that called the Bourj el-Barajneh neighborhood a “bastion” or “stronghold” of the Lebanese militant group Hezbollah. Considered a terrorist organization by the U.S., Hezbollah commands strong political support from Bourj el-Barajneh’s predominately Shiite population. But the population is not unanimous in that support. Furthermore, Christians as well as Palestinian and Syrian refugees also live there, some of whom may or may not back Hezbollah.

The use of such language often infers a component of militarism to the area, as opposed to the reality: Bourj el-Barajneh is a bustling neighborhood of civilian inhabitants. 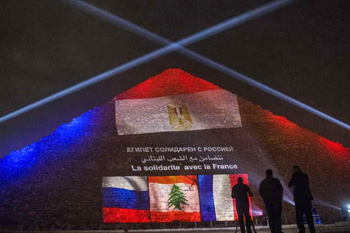 The Great Pyramid of Giza is lit up by images of the flags of Lebanon, France and Russia on Nov. 16 in solidarity with the victims of recent terrorist violence.

Beirut-based journalist Annia Ciezadlo wrote an article aptly titled “Paris is a city. Beirut is a ‘war zone,’” in which she argues that the way we talk about these places matters.

“In the Western press, Lebanon is a country perpetually at war. To Western readers, the pressures of a 25 percent population increase, a war next door, and another series of bombings don’t seem like an inconvenience, because most Americans think of war when they think of Beirut,” she wrote.

“The beauties of everyday life — the smell of fresh bread from a bakery, the laughter of children on their way to school, lovers sitting in a café — don’t define Beirut’s image in the West the way they do for a city like Paris. And yet all those things happen here, too. They are the daily neighborhood life that the bombing here, like the one in Paris, was calculated to destroy.”

While the outpouring of grief following the Paris attacks stood in stark contrast to the trickle that similar tragedies have inspired, this lopsided pattern is certain to continue in today’s heightened security atmosphere. For weeks after Nov. 13, the Paris attacks dominated the news cycle, while warnings of attempted attacks in Germany and Belgium were also high on the Western media radar.

An assault in Mali that took over 100 people hostage and killed 19 was briefly picked up, with CNN attempting to present it to a Western audience by explaining the connection between a victim of the attack and Democratic-presidential front runner Hillary Clinton. A suicide bombing in Cameroon and Nigeria that killed a dozen people when several girls detonated suicide vests barely registered as a blip on newscasts. Boko Haram, an extremist organization that killed more people in 2015 than the Islamic State, is suspected of being responsible for the attack.