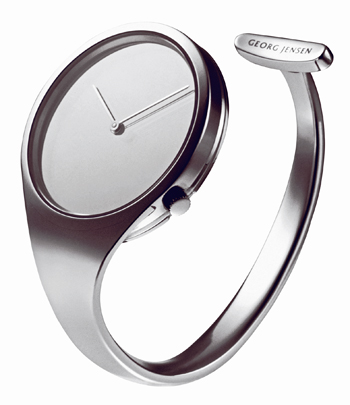 In the “Mad Men” era of the 1950s and ’60s, painting, sculpture and architecture were dominated by men. So women turned to alternative avenues and materials like furniture, textiles, ceramics and metals to leave their artistic stamp.

“Pathmakers: Women in Art, Craft, and Design, Midcentury and Today” at the National Museum of Women in the Arts (NMWA) examines the impact these women artists and designers had on midcentury modernism.

“For these mid-20th-century women, architecture and industrial design were essentially closed male societies,” said NMWA Director Susan Fisher Sterling. “So they had to create their own professional pathways through ceramics, textiles and metals. They also found freedoms in academia, where their ideas helped inspire the next generation. The resulting serious, conceptually crafted objects helped define midcentury modernism in the U.S.”

Alongside furniture and industrial design, the show presents a diverse range of 80 objects by jewelers, ceramicists and textile designers, as well as contemporary work by a newer generation influenced by their earlier peers, to demonstrate how women carved a niche in a male-dominated era.

The exhibit also focuses specifically on Scandinavian artists such as Rut Bryk, Vuokko Nurmesniemi and Vivianna Torun Bülow-Hübe to highlight the parallels between women designers in the United States and their Nordic counterparts. 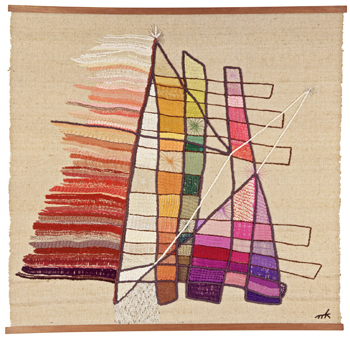 Photo: Museum of Arts and Design / by Eva Heyd

Over 80 objects demonstrate how women forged a distinct path in midcentury modernism, including Mariska Karasz’s “Transcendence”. 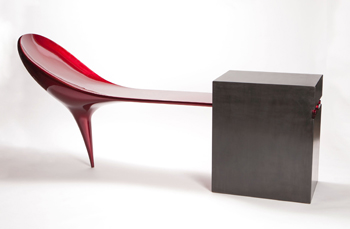 As an example, she pointed to “Anchored Candy No. 7,” a recent work by furniture designer Vivian Beer that boasts a distinctly feminine edge achieved by referencing automotive machinery — usually the purview of men. The resulting piece, which resembles a cross between a stiletto-heeled shoe and a shiny sports car, deftly blends masculine and feminine elements.

It was the pioneering work of “pathmakers” like designer Eva Zeisel who paved the way for Beer’s sleek innovations. Zeisel was known for dinnerware, tea sets, porcelain china, glasses, lamps, chairs and other items that served both a practical purpose but were also widely recognized for their abstract, clean lines and artistic merit.

One of the rarest works from Zeisel’s prolific and long career — spanning 87 years — is on display in the exhibit. The “Belly Button Room Divide,” a 1957 prototype that never went into production, is a simple, colorful room divider that illustrates both her interest in the organic form as well as her playful sense of humor.

Other highlights include Marianne Strengell’s “Forecast Rug,” an aluminum textile that blended the softness and warmth of hand-woven material and helped introduce the industrial material into the home market.

The show hop-scotches time periods and materials, at times eschewing a cohesive narrative, but the eclectic works reinforce the importance of women artists to midcentury modernism while doing what the NMWA does best: dispelling gender stereotypes.

Pathmakers: Women in Art, Craft, and Design, Midcentury and Today