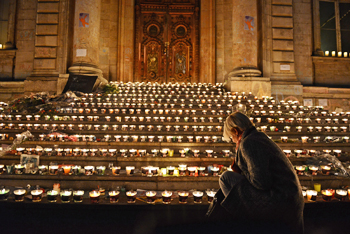 Residents light candles by the Hìtel de Ville to celebrate the city’s annual Festival of Lights, which this year was scaled down to commemorate the victims of the recent terrorist attacks in Paris.

After the Islamic State rampage that killed 130 people and injured over 350 in Paris on Nov. 13, the famed City of Lights was shrouded in darkness. That darkness also descended over France’s third-largest city, Lyon, which had to cancel its popular Festival of Lights less than a month after the carnage.

Reeling from the worst attack on France’s soil since World War II, Lyon nevertheless represented a microcosm of the country’s resilience as it transformed its annual light show extravaganza into a more subdued but no less poignant tribute to the victims of the Paris massacre. Instead of welcoming an estimated 3 million people to gather in public spaces, which would have been a security nightmare in the wake of the attacks, city officials distributed and sold 200,000 candles that residents lit in windows across Lyon on Dec. 8 as part of an illuminating act of defiance against terrorism. Proceeds from the sales go to the families of the Paris victims as well as to the children’s charity Rêves.

Several iconic buildings and the historic Fourvière Hill that overlooks the city were still lit up, and one of the original installations went ahead as planned but was re-imagined as an homage to the terrorist attack victims, whose names were projected along the quay of the Saône River as part of the fresco “Regards” by Daniel Knipper.

Officials admitted that the decision to cancel the massive four-day undertaking — one of the oldest and largest light festivals in the world, and a major economic driver — was a “painful” but “wise” one.

“To my way of thinking, protecting the people of Lyon does not mean giving in to terrorists,” said Gérard Collomb, mayor of Lyon. “What they want above all is to sow discord and pit us one against another, to create ruptures in our society between groups according to their origin, their religion and the way they choose to live. I am convinced that Dec. 8 will convey this message with a great deal of strength and dignity.” 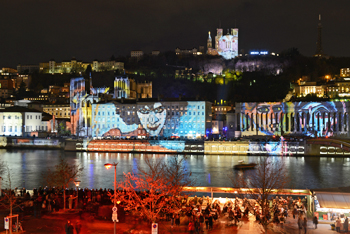 Daniel Knipper’s illuminated fresco “Regards” along the quay of the Saône River in Lyon paid tribute to the victims of the Paris terrorist attacks.

The scaled-down commemoration is, in fact, reminiscent of the festival’s religious roots, which celebrate the Virgin Mary, Lyon’s patron saint. The underpinnings of the festival can be traced back to 1643, when Lyon was struck by the bubonic plague and officials promised to honor Mary if the town was spared. In September 1852, Lyon was preparing to inaugurate a statue of the Virgin Mary that had been erected next to the Fourvière Basilica when flooding from the Saône River delayed the statue’s debut.

Festivities were pushed back to Dec. 8, but a violent storm that morning again postponed the celebration. As night fell, however, the weather finally cleared and residents took matters into their own hands, spontaneously lighting up candles in their windows and balconies — echoing the modern-day reincarnation that took place this past Dec. 8.

Over the last decade, the Fête des Lumières has evolved into a major cultural and commercial attraction — and a showpiece of urban art. The spectacular open-air light show fills every nook and cranny of the city with elaborate, innovative light displays by artists and designers from around the world.

In many ways, the festival is emblematic of Lyon’s own journey as a city steeped in rich history and traditions but one that also embraces economic dynamism and diversification.

With a population of 2 million that includes the surrounding suburbs, Lyon ranks as the second-largest metropolitan area in France (and the third-largest city after Paris and Marseilles). A UNESCO World Heritage Site, Lyon sits at the confluence of the Saône and Rhône rivers in the heart of the Rhône-Alps region. It is home to both ancient Roman ruins and 135,000 businesses.

Lyon is perhaps best known as France’s gastronomic hub, having given the world Paul Bocuse, whose luxury restaurant outside of Lyon received the coveted three-star Michelin rating (and whose teaching institute has churned out a number of other globally renowned chefs). The city boasts a total of 15 Michelin-starred restaurants, along with a smattering of “bouchon” bistros, a type of eatery distinct to Lyon that serves traditional fare such as duck pâté and quenelle de brochet, a pike fish delicately prepared and poached in cream sauce. 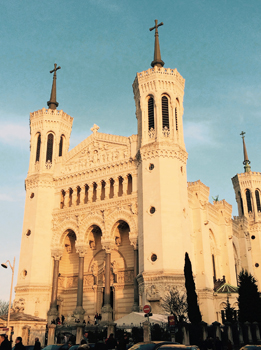 The Fourvière Basilica in Lyon is a striking example of Romanesque and Byzantine architecture.

Lyon also bills itself as an arts and culture capital — it is the most culturally significant city in France after Paris — and in that regard, it has a unique connection to Washington, D.C. The highly acclaimed National Orchestra of Lyon, considered one of the best orchestras in Europe, is helmed by American conductor and composer Leonard Slatkin, who served as music director of the D.C.-based National Symphony Orchestra from 1996 to 2008.

“Since being here, I have learned to love the lifestyle and combination of big city enterprise with small village values,” the American maestro said in a Lyon press kit. “The fact that the city supports its cultural institutions so well is remarkable. With a world-class orchestra and opera company … it has become a destination for people around the world, who know Lyon for its food, cinema and culture.”

In fact, Lyon is considered the birthplace of cinema. In 1895, brothers Louis and Auguste Lumière invented the first movie camera and screened the world’s first motion picture (which depicted workers leaving their family’s factory).

This living cultural legacy permeates the city — the building where the Lumière brothers projected their film, for example, was resurrected in 1998 and is now a 270-seat theater. Over a dozen painted murals also punctuate the façades of buildings throughout Lyon, including a playful mural dedicated to celebrated hometown chef Bocuse, complete with an old-fashioned pastry and bread shop.

Beyond its artistic achievements, Lyon prides itself on its innovative, entrepreneurial spirit. For over 2,000 years, silk-weaving was the economic mainstay. Today, however, the economic base has expanded to include banking, biotech, pharmaceuticals, video game software and a thriving start-up sector, among myriad other industries.

Lyon generates some 15,000 new businesses each year and is home to the international headquarters of Interpol, Euronews and the International Agency for Research on Cancer. It also has the largest network of municipal libraries in France, with 15 libraries serving over 2.5 million people each year. A few years ago, Lyon signed a contract with Google to digitize 500,000 copyright-free works from its expansive holdings.

In addition, the city has partnered with Boston for Big Booster, the first nonprofit international accelerator program for startups to promote cutting-edge innovations in the health, digital, environment and sustainable development fields.

Sustainability is a core theme of Lyon’s economic revival, as urban planners strive to build a green, eco-friendly city. Among the improvements, officials have restored river embankments, employed a pioneering bike-sharing system and instituted a smart city strategy with the aim of attracting investment and bolstering jobs while better managing scarce resources. 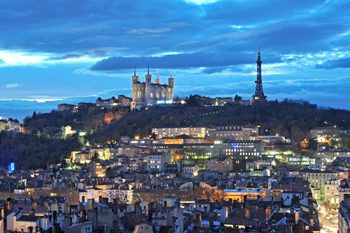 The basilica and historic old town sit atop Fourvière Hill and overlook the city of Lyon.

Because of this emphasis on economic innovation, Ernst & Young recently rated Lyon as the ninth-most attractive European city in terms of international investment. Meanwhile, Mercer’s quality of life survey, which analyzes over 220 cities around the world, ranked it as the 39th best place to live, ahead of Paris and London.

“In terms of quality of life, Lyon clearly stands out in relation to the main European urban areas thanks to its reasonable cost of living and excellent geographical location,” said Florian Kemmerich, director of Olympus Biotech International, in explaining his company’s decision to set up a subsidiary in Lyon. “France’s disadvantages in terms of tax arrangements and employment laws were very quickly balanced out by Lyon’s dynamic profile. The city has a world competitiveness cluster, Lyonbiopôle, which is a center of expertise in vaccines and diagnostics. So the area has a strong economic profile, particularly with regard to the biotechnology sector.”

This amalgamation of new and old is embodied by two of the city’s most striking visual elements: Fourvière Hill and the Musée des Confluences.

The historic heart of the city, Fourvière Hill rises above the Saône River and features stunning vistas of the city below. Here, meandering cobblestone streets evoke Old World charm; brightly colored Renaissance buildings reflect the Florentine influences of the wealthy Italian traders and bankers who settled in Lyon; and a maze of passageways and shortcuts known as “traboules” gives way to quaint courtyards that offer shelter from the tourist bustle outside.

Anchoring the hill is the 19th-century Fourvière Basilica, a dramatic example of Romanesque and Byzantine architecture that looms over the city and stands in stark contrast to its newest architectural landmark: the Musée des Confluences, which literally sits at the confluence of the Saône and Rhône rivers.

Resembling a gleaming crystal-and-steel spaceship of sorts, the museum was designed by the Austrian group Coop Himmelblau to mimic the shape of a cloud. Inside, an eclectic hodgepodge of exhibits examines the history of humanity and the planet with everything from dinosaur fossils, moon rocks and Egyptian sarcophagi (think a combination between D.C.’s National Museum of Natural History and the Smithsonian Air and Space Museum). 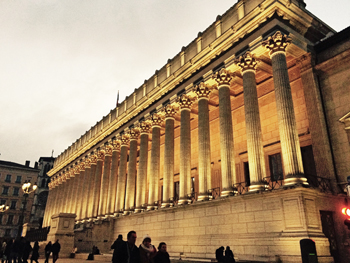 The Justice Palace is one of many floodlit buildings in Lyon, which is famous for its annual Festival of Lights.

The Confluence Museum is the centerpiece of a major revitalization project to transform a once-blighted industrial area into a bold, modern neighborhood that preserves relics of its gritty past. An old sugar factory, for instance, has morphed into a biennial of contemporary art that showcases whimsical pieces such as a set of drums that play when a cluster of cherry pits are dropped from the ceiling.

Creativity forms the backbone of Lyon’s renaissance as the city looks to capitalize on its past with a forward-thinking eye on the future. In addition to hosting the only biennial of contemporary art in France, Lyon also organizes the largest choreographed parade in Europe — more than 4,000 amateurs rehearse for months with professionals to put on a street show watched by 200,000 spectators — along with an experimental laboratory of urban music that regularly welcomes 100,000 participants.

With such events, the city hopes to draw in more tourists, investors, inventors and artists from around the world. Of course, the Fête des Lumières was, and continues to be, the city’s signature undertaking.

Officials conceded that they’d be taking an economic hit by toning down this year’s Festival of Lights, although they said it was too early to offer precise figures of the impact on local businesses. Despite the cancelation of the public light installations, large crowds had still flocked to Lyon to pay tribute to the victims of the violence in Paris. Camera-toting tourists packed cafés while shoppers strolled the Rue de la République, an elegant pedestrian strip lined with retail stores.

The occasional suspicious package — a term with which any Metro rider is all too familiar — frayed a few nerves and security on the streets was omnipresent but not stifling. But otherwise, the Lyonnaise did what they seem to do best: They adapted to the times and made the best of them.

Anna Gawel is managing editor of The Washington Diplomat. She visited Lyon in early December as part of a press trip organized by OnlyLyon, a city branding campaign.