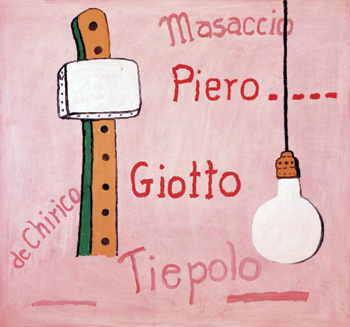 In 1970, the American painter Philip Guston (1913-80), celebrated as a leading abstract expressionist of the New York School alongside Jackson Pollock, Mark Rothko and Willem de Kooning, was at one point “excommunicated” by the New York art establishment.

A show of paintings inspired by the political violence of the late 1960s, depicting hooded figures and taking stylistic cues from cartoons, horrified fellow artists and critics when it was held at the Marlborough Gallery in Manhattan. His movements toward pop art and minimalism, using the figural form and allegorical narrative over the reigning abstract expressionism, fell completely flat. One prominent critic, Hilton Kramer, accused Guston — whose abstractions in the 1950s and 1960s won him acclaim — of intentionally abandoning his own talents in a damning critique, calling the artist “amandarin pretending to be a stumblebum.”

After his minimalist, figural-inspired paintings shocked the New York art world in the late 1960s, Philip Guston retreated to Rome, where he produced a groundbreaking series that’s now on display at the Phillips Collection, which features 39 works including “Pantheon”.

Deeply shaken, Guston left for Rome in 1970 with his wife Musa and took up an artist-in-residency at the American Academy, where he’d previously been a fellow in the late 1940s. His sojourn in the Eternal City some 20 years later provided Guston with the opportunity to work through the critical disaster, but also to further develop the new mode of painting, incorporating elements of the Roman landscape and drawing inspiration from the Italian artists he revered.

The Phillips Collection is the sole U.S. venue for an exhibition featuring 39 paintings on paper from this pivotal point in Guston’s career. First conceived for the Galleria Borghese in Rome by independent art historian Peter Benson Miller, “Philip Guston, Roma” sheds light on the artist’s diverse sources of inspiration, both psychological and political.

The exhibition is also part of the broader Italian cultural festival “La Dolce DC” marking the 150th anniversary of the unification of Italy, the culmination of the national movement known as the Risorgimento (see related story).

While Guston’s works from his earlier, abstract expressionist period and later, monumental existentialist period are held by major museums and are comparatively well known, most of the “Roma” pictures came from private collections or the Guston estate. In assembling the exhibition, curator Miller “rediscovered” some works Guston had given to American Academy fellows before leaving Rome — pictures that had never before been inventoried.

“It was a very interesting project from that point of view, because it was almost like reconstituting a whole part of his career that has never come under any serious scholarly scrutiny,” Miller said.

“It’s a very specific moment where he’s working out the ideas that will then take monumental form in the late paintings. It’s a kind of love letter to Italy.”

If the paintings are a love letter, though, it is a particularly pained one. The main color used in these works, various shades of pink, together with the menacing, recurring hooded figures, evokes an aura of anxiety, rather than relaxation and enjoyment.

For Guston, who had a deep knowledge of Italian art from Renaissance greats such as Piero della Francesca to 20th-century painters Giorgio de Chirico and Giorgio Morandi, confrontation with genius was both stimulating and distressing. It brought forth a mixture of ambition and nostalgia that in turn shaped his painting.

“He was in a very apocalyptic mood when he was painting these,” Miller said. “He had highs and lows and a lot of serious lows. And it was not only because he was reacting to the hostile reception to his work. It was also because, for an artist of Guston’s mettle and temperament, going to see Piero was a visceral, difficult emotional experience. And in fact some of his worst moods were when he was coming back from revisiting them.”

“Pantheon,” completed in 1973 following Guston’s return to the United States, is particularly illustrative of Guston’s confrontation with past genius. A light bulb hangs on the right side of the picture, balanced against an unknown implement on the left. In between are the names of great Italian artists who are part of Guston’s “pantheon”: Tiepolo, Giotto, Piero, Masaccio, and de Chirico. The entire painting is executed in various shades of salmon.

The light bulb, one of the recurring motifs in Guston’s work, represents his studio. Miller said he believed the motif went back to Guston’s childhood, when he taught himself to draw — holed up in a closet with only a single, naked light bulb to illuminate the space. The bulb now becomes like the oculus of the “Pantheon” in a highly personal allusion.

Guston had been driven to take up painting again in the late 1960s because he felt that only by telling stories through this medium could he respond to the profound violence shaking American society at the time. Similarly, Italy was in the midst of the “Years of Lead” or “anni di piombo,” its own period of political and social upheaval in the early 1970s.

The demonstrations Guston witnessed in the streets of Rome served to remind him of the Ku Klux Klan marches and race riots back in the United States. In some paintings, a pink pine tree from a Roman garden may be just that; in others, it morphs into a menacing, hooded figure.

So while delighting in the beauty and grandeur of Roman gardens and ancient ruins — and the solace they provided him — Guston’s “Roma” paintings can’t seem to escape the blood and tragedy that haunted the artist.

For Miller, these layers of beauty tinged with pain make the underappreciated “Roma” series such a consequential body of work. “Some of them are happy vistas of the Roman landscape — rosy pink with fountains bubbling, a sense of joy — while other pictures have this tough, rather tragic undercurrent,” he said. “And I don’t think people looked to see the degree to which these were crucial for what came later.”

Philip Guston, Roma
through May 15