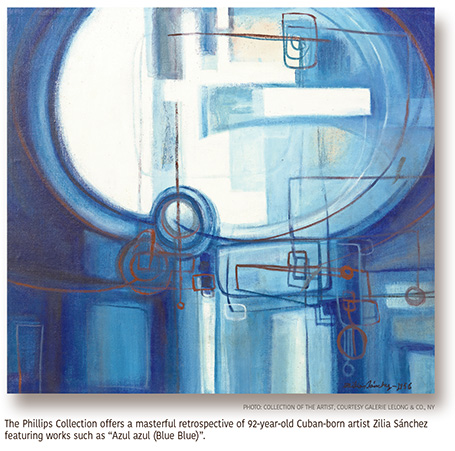 The canvas serves as the art itself, stretching and pulsing outward in surprising shapes, lines and textures in a remarkable new exhibition highlighting the work of a relatively unknown but visionary artist.

The Phillips Collection’s latest show offers a masterful retrospective of Zilia Sánchez, 92, a Cuban-born artist who lives in Puerto Rico. “Zilia Sánchez: Soy Isla (I Am an Island)” is at once hilarious, profound and strange, with pieces that feel both incredibly insular and deeply connected to the material world. It’s a show you’ll find yourself thinking about weeks later, an unconventional image or newly connected thought leaping into your mind.

It’s a strikingly feminine exhibition, concerned with women’s mythology, bodies and desires. Going through in chronological order, you see the narrowing and sharpening of Sánchez’s vision. It becomes blunter and sharper, but also almost inaccessible, a mythology all her own that reaches out only literally to viewers. They’ll either get it, or they won’t.

“I am an island. Understand it, and leave,” Sánchez says in the documentary about her work that accompanies the exhibition.

The show starts with a somewhat hilarious video of Sánchez sending out one of her works into the sea, to see where it will go and how it will come back. It’s a bold and off-putting introduction to this artist, and it works. We then see her as a traveler throughout the exhibition, hopping from island to island: Cuba, Manhattan, Puerto Rico.

While touring the show, it’s clear that space, material and lines are more essential to these pieces than color or light. There’s a coolness to her approach, with blue pastels, hard black lines, stretches of white and sharp forms shaping her canvases. 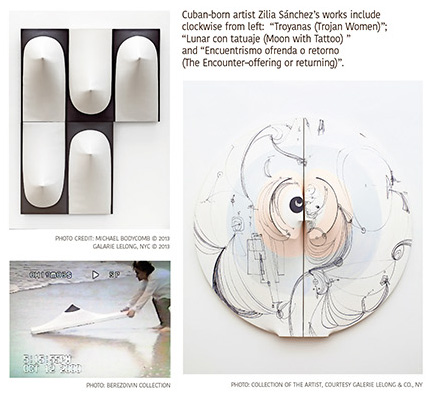 In “Moon with Tattoo,” the soft mound form still remains the focus even as black curved drawn lines fill the canvas. It’s shape and meaning, colliding. “Trojan Women” is, in a word, cool. It’s reminiscent of a lineup of shields, all light and sharp. It also looks like a bunch of nipples, but that seems to be the point.

“Line is the first thing you do … line is a release of expression,” Sánchez is quoted as saying in one of the museum labels.

In the final room, which features the documentary, there are images from the 2016 series “Blue Blue.” The shades deepen, and it feels like a fuller vision in many ways compared to what’s come before. It’s almost unfortunate that they are in the room with the documentary, since that video really commands the space, particularly due to its depiction of the impact of Hurricane Maria on the artist’s works.

Also noteworthy to museumgoers strolling through the exhibition is the little detail of her signature on the sides of the large canvas pieces. 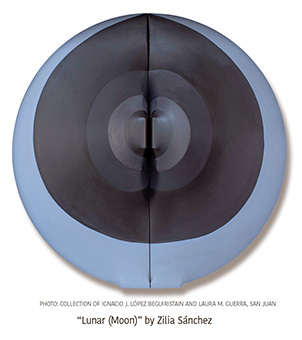 This show is also about “expanding our own horizons in terms of an institution…. We are the first museum of modern art, and this fits into what the Phillips is all about,” she said.

When she first encountered Sánchez’s work, Sretenović recalled she found it “totally novel.”

“It was an immediate connection, reaction, nonverbal, on a totally subconscious level,” she said. “It affected me so deeply and so strong.”

There’s a “dichotomy that plays out in her work from beginning to end,” Sretenović noted. “She wants to connect, but at the same time she wants to disconnect from the world around her. There’s a lot of playfulness and a lot of ambiguity — you can never pin her down.”

After wandering through this provocative, winking, sharp, insightful exhibition, who would ever want to?

Zilia Sánchez: Soy Isla (I Am an Island)