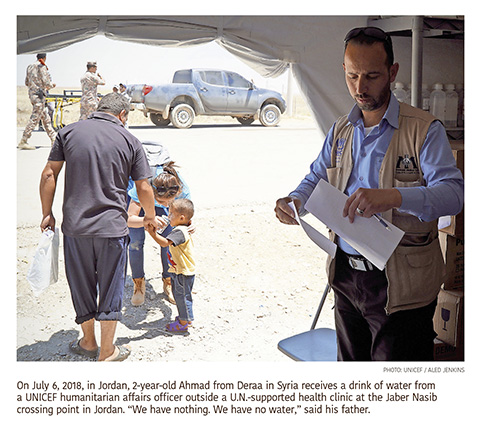 After eight years of a brutal and still unfinished conflict, around half of Syria’s population are currently living as displaced persons — making them one of the largest post-World War II refugee populations the globe has ever seen.

The impact of their plight and flight has been widespread, too, evoking both generosity and hostility across continents.

Yet, nowhere have these millions of refugees had a more dramatic effect on day-to-day life than in Syria’s immediate neighbours: Lebanon, Turkey, Jordan and Iraq.

Initially welcoming these exiles from war and repression, these four countries are now home to some 5.5 million refugees.

Now, however, with economic conditions deteriorating and competition for work high, those displaced face growing pressure to go home, both from local and international actors.

“Home,” though, may have been reduced to a pile of rubble, while fears of what might happen to those who go back are widespread.

In this push-pull battle, the plight of the refugees is also being entangled in wider power games over the future reconstruction and reconstitution of Syria.

“No one says so explicitly,” said Filippo Dionigi, an international relations lecturer at the University of Bristol in Britain who specializes in the Syrian refugee crisis, “but it seems the refugees have almost become a currency in deals over who pays for reconstructing Syria.”

Rock and a Hard Place

Since the outbreak of the uprising against Syrian President Bashar al-Assad in 2011, some 6.6 million Syrians have been displaced within the country’s borders, while 5.6 million more have become registered refugees outside the country.

Conditions for these people vary widely, as do their levels of income and ability to access local support networks.

In Iraq, for example, many of those who have fled are Syrian Kurds who went to the Iraqi Kurdish region. While still undergoing great hardship, their move has at least placed them among sympathetic locals. Many have also been able to gain Iraqi Kurdish identity cards, giving them the right to stay and work.

In Turkey, too, conditions have been hard, but the country’s more developed economy and political stability, along with aid from Europe and elsewhere, have helped the giant refugee population. In addition, a potential customs deal between Turkey and Europe to cover not only manufactured goods but also agricultural products could open up new opportunities for refugees to join the workforce.

In Lebanon, however, conditions have generally been much tougher, while Jordan remains somewhere in-between. UNHCR estimates that around 70 percent of Syrian refugees in Lebanon live below the poverty line.

Site of the infamous 1982 massacre between Palestinians and right-wing Christians, Shatila was founded in 1948 to house 3,000 Palestinian refugees. “By 2011, before the conflict in Syria started, there were 20,000 people here,” Kayali explained. “Now, with the influx of Syrian refugees since then, there are 43,000 people here — and all still living in the same, one square-kilometer site.”

The camp, along with others in the Bekaa Valley and elsewhere in Lebanon, lacks basic facilities such as fresh, clean water and safe electricity supplies.

In addition, “The U.S. withdrawing its funding for the U.N. Relief and Works Agency [UNRWA] has had a huge impact,” said Kayali.

UNRWA had been one of the main supporters of the local economy, with the agency now having to make cuts as U.S. funds are withdrawn.

“Garbage collection was the first thing to go,” Kayali said, “so now there’s no sanitary support and hygiene is suffering. Destitution has undoubtedly accelerated for many families.”

Syrian refugees have also often found themselves facing extortionate rents from Palestinian landlords who were themselves once refugees. “In Shatila, they can be charged $200 to $250 a month for a small room, $1,000 for an apartment,” Kayali noted. 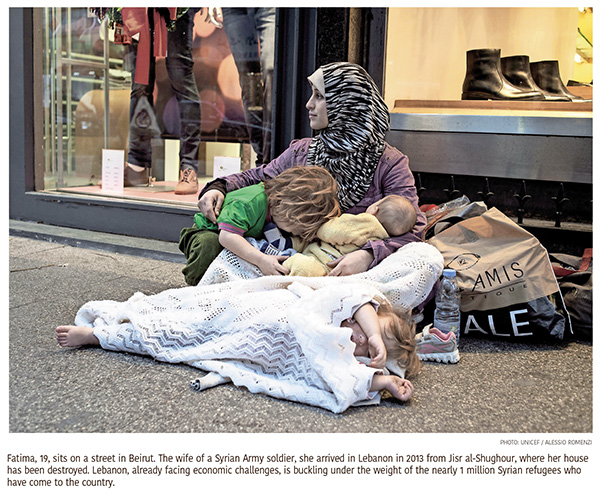 Meanwhile, jobs have become much scarcer for Syrian refugees due to a combination of government regulation and overall economic decline.

Indeed, the economic slowdown in the Gulf, resulting mostly from low oil prices, has meant many layoffs, slashing remittances and sending unemployed Lebanese — and Jordanians — home.

The Lebanese authorities have also introduced laws requiring residence and work permits for Syrian refugees to get jobs. This has driven many into the shadow economy, further exposing them to exploitation.

“Before 2015,” according to Tokmajyan, “UNHCR statistics show that all eligible family members of 58 percent of refugee households had residence permits. After the new laws were introduced, by 2018 that figure had fallen to 18 percent.”

Despite the difficulties of obtaining work permits in Lebanon, Jordan and Turkey — and the limitations each country places on the fields in which Syrian can work — many businesses continue to hire Syrians, but mostly for low-wage, low-skill jobs.

A recent study by California-based Rand Corporation found that “Syrians in all three countries were finding ways to get by. Most men were working, as were many women between the ages of 18 and 55, but not in the occupations in which they had education, training, and experience,” according to the report.

The report called this “a lost opportunity both for the Syrians and their host countries” because “firms in these countries often struggle to fill semi-skilled and highly skilled positions, especially in second-tier cities.”

The report recommends vocational training and job-matching programs. That includes moving refugees away from overburdened capital cities, where most are currently concentrated, to secondary cities or special industrial zones that offer more employment opportunities.

But such advice is likely to fall on deaf ears in Lebanon, Jordan and Turkey, which were already struggling economically in the wake of the 2008 global recession. The refugee influx, regional instability and drop in oil prices have exacerbated their economic woes; even once-prosperous Turkey went into recession in the last quarter of 2018.

These economic pressures have added to political forces pushing for the refugees to return home.

“There have really been two phases in the region’s attitude toward the refugees,” said Dionigi. “First, there was great sympathy and a feeling of solidarity with them. Then, however, after Russia intervened and the idea that Assad was about to fall disappeared, regional countries realized the refugees wouldn’t be going back any time soon. The perception then grew of the refugees being a social and economic burden.”

In Lebanon in particular, elements within the government and some local municipalities have thus been keen to explore ways to encourage refugees to return. 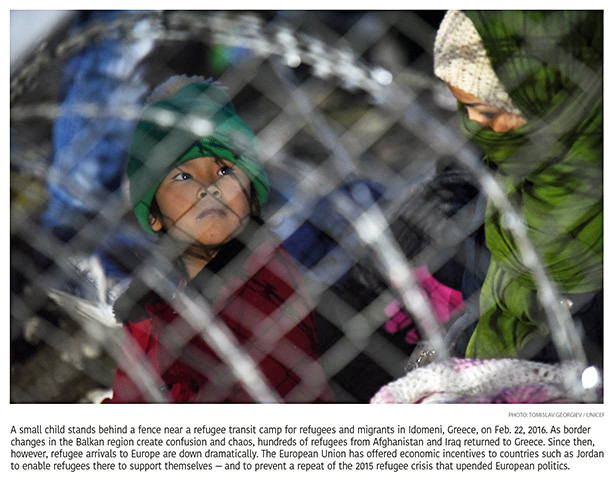 Yet, in a sign of the fragmented nature of the Lebanese state, that debate has pitted members of the newly formed coalition government against each other. Saleh al-Gharib, the refugees minister who is a pro-Assad Druze representative, is keen to have Syrian refugees return, while the prime minister, Saad Hariri, has warned of the Syrian regime’s desire to “take revenge” on them.

UNHCR figures show that some 165,000 refugees have returned to Syria so far, with concerns over safety a major reason why there have not been more.

Other factors affecting the decision to return include housing, availability of work, services and legal issues over title and land rights.

“While Syrians of all walks of life want to go back, there are many obstacles to their return,” Kayali said. “Some face returning to a place where their home is destroyed, there is no school, no facilities, no infrastructure. Others are scared of being kidnapped or conscripted into the army. A huge number of the refugees are women and children who have no one to depend on, while if you exit Lebanon or Jordan and it doesn’t work out, you can’t get back in, as the borders are closed. As a result, we are even seeing smugglers working again, bringing people back in who have already fled once.”

Mid-March saw the latest in a string of international initiatives on Syria, with the Brussels III conference seeking a permanent solution to the Syrian crisis, while also mobilizing more humanitarian assistance for refugees.

“For Europe in particular,” said Dionigi, “there has been some thinking that if the regime — and Russia — make Syria safe and the refugees return, then the West will help finance the rebuilding with grants and soft loans.”

This would address the desire of Russia in particular to start rebuilding the shattered economy with help from the West — a desire that has so far been thwarted by U.S. and European insistence that reconstruction can only begin once a U.N.-backed settlement has been agreed to. Such a settlement would likely include political and constitutional changes to Syria rejected by Assad. 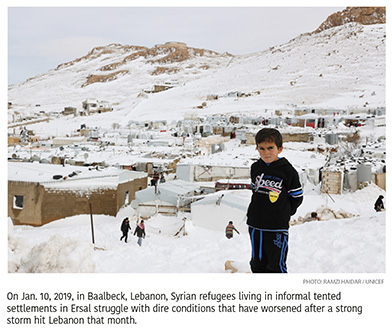 In the meantime, Western governments have been trying to support efforts to enable refugees in neighbouring countries to support themselves.

Initiatives such as granting access to EU markets for Jordanian goods that are produced with a percentage of Syrian labour have had some results. Jordan has also allowed work permits for Syrians in certain economic sectors.

Yet there is also suspicion that the real motive behind Western efforts to ensure the long-term settlement of Syrian refugees in neighbouring countries is to avoid the prospect of another wave of Syrian refugees heading to Europe, as they did in 2015.

“These initiatives to make local work more sustainable also mean taking some of the pressure off Europe’s borders,” said Dionigi.

The Syrian refugees can, of course, be a major asset for their host countries, with a wide skill set represented among them.

Yet in Lebanon, more than elsewhere, but also in Jordan, Iraq and Turkey, overall economic growth is vital if Syrian refugees are to find both short- and long-term safety and stability.

“Some people really can’t go back as it means detention,” said Tokmajyan. “Their situation is really critical and in the future, they will be more vulnerable to exploitation. More and more people will join this group, too, if the Lebanese economy continues to decline.”

Meanwhile, in the densely packed refugee slums of Shatila and in the recently flooded camps of the Bekaa Valley, “it is very difficult to keep going,” Kayali said. “When you look at the Palestinians here, first they thought they were going back, then they just wanted some rights — so the bar keeps being set lower and lower, and this feels like it’s happening to the Syrians now, too.”