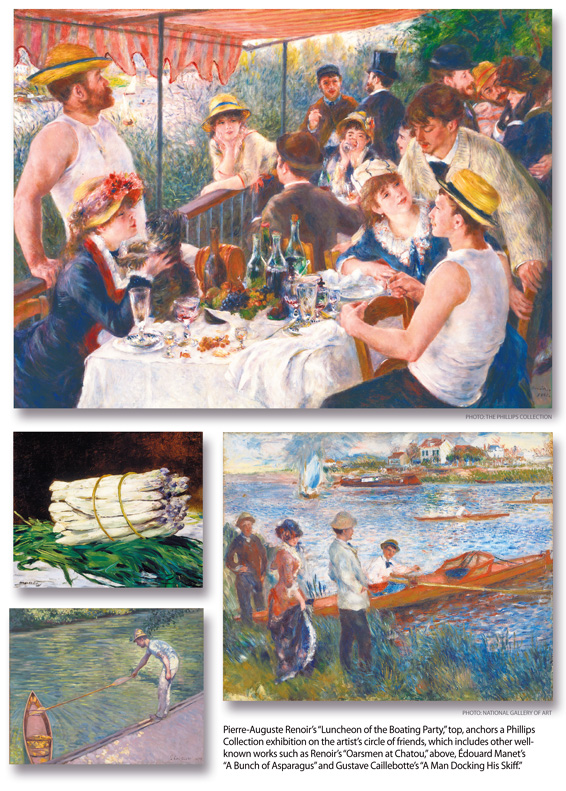 A new exhibition built around the Phillips Collection’s iconic impressionist masterpiece “Luncheon of the Boating Party” takes visitors behind the scenes of the rich world that Pierre-Auguste Renoir created in his painting.

“Renoir and Friends” serves as a lush exploration of the larger sphere the French artist inhabited, highlighting his family life, interest in costuming and, most critically, the people who modeled for the famous 19th-century painting. More than 40 works are on display — including paintings, drawings, pastels, prints and photographs — and it all comes together for a lovely exhibition that pays tribute to and shines a new light on the museum’s iconic work.

Many of the pieces play off the theme of the central image, depicting summer days filled with boating, dancing, drinking and lounging. The show leaves the impression of wandering on a hazy summer day, permanently blissful — it’s an ideal day at the museum, especially as D.C. heads for colder months that feel far removed from the warmth of Renoir’s luncheon.

Eliza Rathbone, the Phillips’s chief curator emerita, told The Washington Diplomat that the idea behind the exhibition was to take this well-known work from Renoir’s career and “see it anew, in a fresh way.”

The exhibit delves especially into the fascinating figures of Renoir’s future wife and regular model, Aline Charigot, artist Gustave Caillebotte, and art critic and collector Charles Ephrussi, all of whom make an appearance in “Luncheon.”

When it was first displayed in 1882, people saw the plein-air masterpiece “just as a genre scene, with young women, jolly boaters, a mixed crowd of people having a lovely time,” Rathbone said. But look a bit deeper at the process of the painting and it is clear “it was not a simple undertaking,” she said, “given that the composition is extraordinarily complex.”

“What I was intrigued by was who were the models, and I felt if one found out who they were, you would find out the backstory and why and how he came to do the painting,” Rathbone said.

That’s the crux of the exhibition, this exploration of the “remarkable group of people who were Renoir’s friends,” according to the curator.

Seeing the artist through the context of his friends — many of whom often served as models for his work — makes for a fascinating show and offers museumgoers a newfound appreciation of his famous luncheon scene.

“One of the things we discover in looking closely at Renoir’s friendships is what a diplomat he could be,” Rathbone said. “He moved in all kinds of circles, and he came from a very simple background. It’s kind of amazing he succeeded as well as he did in becoming a very good friend of people of very different backgrounds.”

The show is filled with memorable works from Renoir and other artists of his era, such as Édouard Manet and his asparagus paintings. Manet sold Ephrussi his painting “A Bunch of Asparagus” for just 800 francs, but the art critic sent back 1,000. Manet then sent Ephrussi a painting of a single asparagus — along with a note that said “there was one missing from your bunch.” It “really encapsulates this wonderful sense of support” that Ephrussi provided to artists, most notably Renoir, Rathbone said.

One of Rathbone’s favorite pieces is Caillebotte’s “A Man Docking His Skiff.” “It’s a weird perspective, so watery — it’s just kind of perfect for this exhibition,” she said.

As for Renoir, a highlight can be found in his painting “Young Woman Sewing,” which bursts with incredible colors behind the simple depiction of the title. The blue background dances with pinks, purples and greens.

The exhibition also features aspects of the material culture of the time, like hats and contemporary books, which fill out Renoir’s world and that of his famous boating party. The show is a comprehensive and affecting look at the people that mattered to his life and work.

“Renoir and Friends” is masterful in the way it builds anticipation to its inevitable finale — the celebrated painting itself. It concludes with a behind-the-scenes look at the painting, including a technical study of the picture and the ways Renoir altered the image in the course of his work. While fascinating, what ultimately stays with viewers is the sumptuous world the brilliant artist created both in his life and on the canvas.