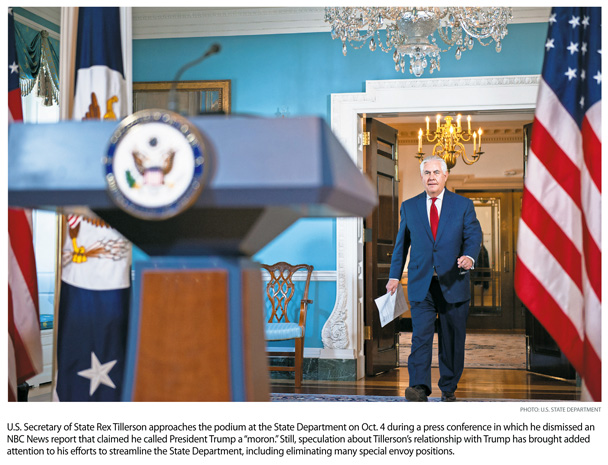 Also See: Sidebar – Who’s In and Who’s Out

Special envoys don’t seem so special under the Trump administration, which wants to significantly trim down the State Department and eliminate representatives for specific issues such as the Arctic, climate change, Burma, Syria and Sudan. Supporters of the move say there’s been a proliferation of special envoys in recent years whose portfolios are either outdated or overlap with existing bureaus. Critics say special envoys can highlight particular issues that might otherwise slip through the cracks.

Special envoy positions are currently under review by both Secretary of State Rex Tillerson and the Senate Foreign Relations Committee, although this type of scrutiny is not new. Each secretary of state comes into the job with his or her own take on how to utilize special envoys and whether they’re even necessary.

But Tillerson’s review has attracted added attention given his tumultuous reign at Foggy Bottom. The former ExxonMobil CEO has been widely criticized for being aloof and insulated from his rank and file. Morale is reportedly abysmal at the State Department, which faces a 31 percent cut under President Trump’s fiscal 2018 budget and an 8 percent reduction in staff.

The bulk of the budget cuts, however, are unlikely to pass muster in Congress, where lawmakers have also expressed reservations about plans to reorganize the State Department and USAID. Still, Tillerson has set about downsizing the organization as part of a major restructuring, leaving dozens of key posts vacant — along with the impression that America’s Foreign Service is adrift and dysfunctional.

Questions about Tillerson’s competence have been coupled with pervasive speculation about his strained relationship with the president. Senate Foreign Relations Chairman Bob Corker (R-Tenn.) recently lamented that Trump has “castrated” his secretary of state, undercutting his quiet diplomacy to get China to cooperate on the North Korea nuclear crisis, among other matters.

Reports by NBC News that Tillerson called Trump a “moron” for suggesting a 10-fold buildup of the nation’s nuclear stockpile further cast doubt on whether he can remain an effective voice for the president. It also fanned the perpetual rumors of an impending “Rexit” whereby U.S. Representative to the U.N. Nikki Haley might replace him.

Tillerson has not denied the moron reference, though he insists he’s not leaving the job and that his relationship with Trump remains solid. In the meantime, he’s plodding along with plans to streamline the bureaucracy — and that includes eliminating many special envoy positions, either outright or subsuming their duties and staff into already existing offices at the State Department.

He spelled out his plans in a letter to the Senate Foreign Relations Committee. The letter acknowledged the previous effectiveness of special envoys while downplaying the current need for a lot of them: “Over the past four decades of U.S. diplomacy, Congress and the President have utilized these positions to assert U.S. leadership abroad and address emerging challenges. A few examples include mediating peace in Northern Ireland, restoring full diplomatic relations with Burma, addressing threats to global health, and serving as representatives to international organizations. Today, nearly seventy such positions exist within the State Department, even after many of the underlying policy challenges these positions were created to address have been resolved.”

Tillerson sees special envoys as more of a hindrance to U.S. diplomacy than a help. “I believe that the Department will be able to better execute its mission by integrating certain envoys and special representative offices within the regional and functional bureaus, and eliminating those that have accomplished or outlived their original purpose,” he wrote in his letter.

He added that this would address concerns that special envoys can “circumvent the regional and functional bureaus that make up the core of the State Department.” He also noted that budgets, staff members and responsibilities would be reallocated to the appropriate bureau, and senior bureau officials would be empowered to interact with high-level officials on certain issues.

In other words, Tillerson does not like the idea of special envoys being a workaround in relation to the existing State Department structure. This view aligns with the general view of career foreign service officers at State.

“Career diplomats tend to be less than enthusiastic about special envoys,” former U.S. Ambassador John Campbell, a senior fellow for Africa policy studies at the Council on Foreign Relations and a foreign service officer from 1975 to 2007, told The Diplomat. “There are a number of problems. If you have a special envoy to a region or purpose, there can be confusion as to lines of authority, who’s in charge of what and where.”

Special envoys have become a contentious issue at State for the last 25 to 30 years, said Campbell. “The question really is: Under what circumstances can a special envoy add value to the search for a solution to whatever the particular issue is? For career diplomats, the value added is pretty obscure.”

Career foreign service officers tend to see special envoys as not especially helpful because their tenures are often very short. They also require a considerable amount of resource support, such as a staff.

In his letter to the Senate Foreign Relations Committee, Tillerson listed which special envoy positions would stay, go and change (for the complete list, see related sidebar).

Among the positions retained would be: ambassador-at-large for global women’s issues, special envoy to monitor and combat anti-Semitism and the special presidential envoy for hostage affairs. 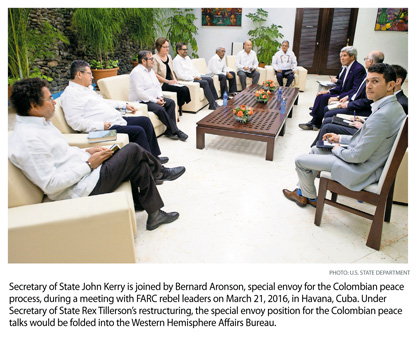 The positions retained and expanded include the ambassador-at-large for international religious freedom, which would assume the functions and staff of the special representative for religion and global affairs, special representative to Muslim communities, special envoy to the Organization of Islamic Cooperation, and special advisor for religious minorities in the Near East and South/Central Asia.

Other retained and expanded positions would be: ambassador-at-large to combat HIV/AIDS globally and the special envoy for Holocaust issues.

Other prominent positions would be folded into existing bureaus. The Office of Global Food Security would be moved to USAID, for example.

The special envoy for climate change and the special representative for the Arctic region would be cut and subsumed into the Bureau of Oceans and International Environmental and Scientific Affairs.

The special envoy for the Great Lakes Region of Africa and Democratic Republic of Congo and the special envoy to Sudan and South Sudan would be cut and subsumed into the Bureau of African Affairs.

The special representative and policy coordinator for Burma would be cut and subsumed into the Bureau of East Asian and Pacific Affairs.

And special coordinators for Libya, MEK resettlement and Syria would be cut and subsumed into the Bureau of Near Eastern Affairs.

It’s the job of Congress to pass a budget for the government, so Tillerson’s plans are subject to lawmaker approval. Congress mandates 11 special envoy positions.

The Senate Foreign Relations Committee had a hearing in July during which senators asked Deputy Secretary of State John Sullivan to discuss the administration’s plans for reorganizing the State Department.

Committee Chairman Bob Corker said that he supports cutting the number of special envoys. “These positions are duplicative, they waste money, they have huge staffs,” he argued. “They do more harm than good. I think they hurt the culture of our professional foreign service officers because they see them in many cases as a workaround. It hurts those professionals that are doing their jobs well. I hope we’ll do away with all of them that are unnecessary, and I think most of them are unnecessary.”

Sen. Ben Cardin (D-Md.), ranking member of the committee, echoed Corker’s opinion that there are too many special envoys, but he advised caution with cuts. “There are areas where I want to have special attention where I don’t think you get it unless there’s a point person in the State Department to deal with it,” he said.

Other members of the committee brought up specific envoy examples. Sen. Chris Coons (D-Del.) pointed out that there is no point person at State for the implementation of the nuclear deal with Iran. Sen. Ed Markey (D-Mass.) said that while prevailing opinion is that the Good Friday peace accords have made the Northern Ireland representative moot, the issues have “matured” into other areas that could still warrant a special envoy. “In the area of Brexit, there’s likely to be an exacerbation of tensions we haven’t seen in a long, long time,” he said.

Markey defended special envoys in general. “Each one of these areas has a reason why they have a special envoy. If they’re moved into larger parts of the agency that don’t have any squarely aligned responsibility with a senior person inside of the department, it just would run the risk of … not getting the attention it needed.”

At the end of the hearing, Corker, emphasizing congressional oversight for special envoys, brought up the newly created special envoy to Ukraine, which he believes should be subject to Senate confirmation.

President Trump’s budget proposed a 31 percent cut to the State Department’s funding, which Congress is unlikely to permit. Even many Republicans say that drastically slashing the agency’s funds would hamper the ability of U.S. diplomats to carry out foreign policy around the world. 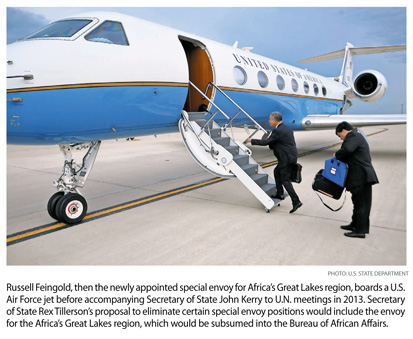 Tillerson plans to cut expenses at State by relying on attrition in the ranks, which means counting on retiring officers to save money. Cutting special envoys, and the staffs and other resources that come with them, is another cost-saving measure. He sent details about the first phase of the State Department reorganization to the Office of Management and Budget in September.

The resources allotted to the State Department in Trump’s budget indicates how he values international diplomacy, which is to say, not much.

“I haven’t seen a lot of evidence that the White House sees a lot of value in the State Department to begin with,” Jon Alterman, director of the Middle East Program at the Center for Strategic and International Studies and a former member of the Policy Planning Staff at the State Department, told The Diplomat. “Trump doesn’t seem enthusiastic about having a large number of people who represent his agenda abroad. The slow pace of appointing ambassadors and staffing up the State Department suggest to me they don’t see an urgency in invigorating the State Department.”

Critical ambassadorial appointments remain vacant, including a U.S. ambassador to South Korea at a time when tensions between the U.S. and North Korea have been escalating as Kim Jong-un becomes increasingly brazen in his nuclear threats and Trump engages in a potentially lethal war of words with him (also see “Climate Change-Fueled Rise in Sea Levels Set to Hit Asia Hard“).

“International diplomacy is simply not getting done,” said Campbell. “I wonder about the calls for a diplomatic approach to North Korea. Who’s going to do it? There’s no secretary for East Asia [the position is vacant at State]. If you’re going to have a diplomatic approach, you have to have the instrument through which to do that.”

To complicate matters, Tillerson’s relationship with Trump has been deteriorating. Although Trump publicly supported his secretary of state right after the story broke of Tillerson calling the president a moron, the beleaguered secretary of state — who by most accounts did not want the job in the first place — may not be around for long, whether he wants out or the directive comes from Trump. If Tillerson leaves his position early, the State Department faces even more uncertainty about its future.

Aileen Torres-Bennett is a freelance writer in Washington, D.C.