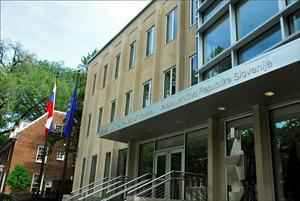 Kalorama is a tony neighborhood sandwiched between Connecticut and Massachusetts Avenues in Northwest Washington, a bucolic residential getaway boasting beautiful homes — and its fair share of embassies and ambassador residences.

The Slovenian Embassy sits in the heart of D.C.’s Kalorama neighborhood.

That high concentration of diplomatic representation in a small neighborhood — there are some 60 offices or chanceries in five square blocks — has aggravated some neighbors and prompted a rewrite of the regulations governing where foreign missions can establish their permanent presence in the nation’s capital. It also points to a change in how and where embassies are located, pushing them out of traditional diplomatic enclaves like Embassy Row.

At its July meeting, the National Capital Planning Commission (NCPC), the federal agency that plays a role in determining development patterns in Washington, approved a change to the rule that allows countries to open embassies in residential areas.

According to federal regulations, foreign countries can establish their diplomatic headquarters without prior approval in commercial, mixed-used or waterfront areas. But since 1983, those regulations also allowed chanceries in residential neighborhoods, provided that a certain ratio of residential-to-commercial use is met in those areas. (It’s known as the one-third/two-third rule: If one-third of the block is used for commercial or non-residential uses, a chancery can locate there.)

While the rule was originally aimed at offering the 185 countries with diplomatic representation in Washington more options for their chanceries — there are 322 chanceries or chancery annexes in the city — NCPC officials admitted at the July meeting that it had been applied inconsistently, allowing for an over-concentration of diplomatic facilities in neighborhoods like Kalorama. Residents have complained that the many chanceries lay claim to limited street parking and rarely show signs of life at night, creating dead zones in the neighborhood. 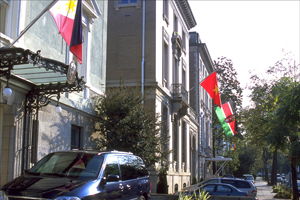 Embassies in D.C. have traditionally been located along Massachusetts Avenue in a stretch known as Embassy Row, pictured, as well as 16th Street, NW.

But the National Capital Planning Commission is encouraging foreign missions to locate outside largely residential areas.

“Concentrating chanceries in neighborhoods may impact traffic, parking, noise and land use patterns. There may be other issues related to protecting neighborhood character or site-specific historic preservation issues,” said an NCPC report on how existing rules have affected neighborhoods like Kalorama.

Along with the NCPC change, officials in the city’s Office of Planning have similarly been preparing regulatory changes to encourage foreign countries to locate outside of Kalorama and Dupont Circle — the area collectively known as Embassy Row — as well as 16th Street, NW, all historic areas where space is at a premium. Under that proposal, a chancery could set up in a residential neighborhood anywhere in the city, provided that half of the block it seeks to locate on is already used for office or commercial space.

Put together, the changes signal a shift in accommodating the ever-expanding presence of foreign countries in the limited confines of the nation’s capital (the collapse of the Soviet Union and Yugoslavia in 1990s added some 20 embassies to the city alone). According to NCPC staff, the city is running out of land in traditional diplomatic enclaves, even more so considering that chanceries are growing larger and require more security.

“The availability of sites that meet these needs within traditional diplomatic areas in the city is increasingly limited, and therefore, identification of additional areas zoned for matter-of-right chancery use may be necessary to accommodate future demand and relieve overconcentration in traditional diplomatic enclaves,” explains the NCPC report. 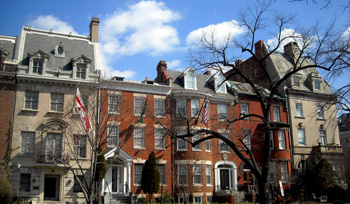 Private residences and embassies line Massachusetts Avenue between 22nd Street and Sheridan Circle, including the embassies of Georgia and Turkmenistan.

Both NCPC and D.C. officials say that in the future, more chanceries will be located on specially designed diplomatic compounds, like the International Chancery Center in Van Ness and the Foreign Missions Center at the Walter Reed Army Medical Center campus, a 43.5-acre site that is expected to house up to 15 chanceries. The center is expected to be fully built-out by 2032 (see “State Department Eyes Walter Reed to be D.C.’s Next Embassy Enclave” in the September 2012 issue of The Diplomat).

“New chancery development should be encouraged at the proposed Foreign Missions Center at the former Walter Reed campus. Opportunities to locate chanceries in areas of the District that have not traditionally been considered should also be promoted,” says NCPC.

The commission admits that it faces a precarious balance. On the one hand, diplomatic obligations and the over-arching principle of reciprocity have regularly pushed the State Department to insist that foreign countries be given wide latitude in locating chanceries in the city.

The castle-like French Residence takes up a prime piece of real estate in Kalorama.

The goodwill works both ways. For instance, when the State Department facilitated the construction of a massive new chancery for China in D.C.’s Van Ness neighborhood, Chinese authorities responded in kind by allowing the construction of a huge new U.S. diplomatic compound in Beijing. On the other hand, even the sprawling embassy enclave of Van Ness is simply running out of room.

Foreign missions certainly have their appeal: They invariably boost local businesses and add cachet to their surroundings, but not all homeowners are enamored with having a diplomatic neighbor next door. D.C. officials are seeking to protect the city’s residential spaces, especially as the city’s population continues to grow and real estate becomes a precious commodity.