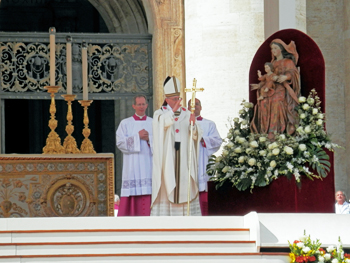 Through egalitarian charm and an encyclical on climate change, Pope Francis’s papacy has brought renewed attention to the Vatican’s foreign policy agenda. In September, the soft-spoken Argentine heads to the United States for the first time in his life, and for perhaps the most important diplomatic mission in the two and a half years of his papacy.

Economic equality and the inclusion of lesbian, gay, bisexual and transgender (LGBT) Catholics are among the issues Francis will, respectively, confront and be confronted by during his visit to Washington, New York and Philadelphia. Vatican watchers say the first-ever papal address to a joint session of Congress and a speech to the United Nations offer Francis a powerful platform for furthering his pursuit of economic equality and environmental sustainability. The pontiff is unlikely to alter his tone to accommodate American critics who paint him a socialist, observers say.

The status of LGBT Catholics in the Church, meanwhile, will be an undercurrent of the visit, with some groups calling on the pope to expand on welcoming gestures he has made toward a minority.

From the Slums to St. Peter’s

When Francis was known as Jorge Mario Bergoglio and an archbishop and cardinal in Buenos Aires, he got a raw view of capitalism. Argentina had defaulted on its debt in 2001, sending the economy into a tailspin. He spent a lot of time on the city’s poorer fringes saying mass and preaching the Gospel on street corners, according to Father Thomas Reese, a Jesuit priest and senior analyst with the National Catholic Reporter news service. That experience contributed to Francis’s “agnostic” view of the free market’s ability to help the poor, Reese said in an interview. “Like earlier popes, he’s a real critic of libertarian capitalism. He sees a robust role for government in the regulation of the market and of the economy,” added Reese, who was in Rome to cover Francis’s election in March 2013.

Pope Francis appears in public for the first time as pontiff on the balcony of St. Peter’s Basilica after being inaugurated on March 13, 2013.

On a recent trip to South America, Francis called the idolatry of money “the dung of the devil” and said that poor countries should not be sweatshops for richer ones. His 192-page encyclical on climate change reflects on the socio-economic implications of that global challenge, worrying that poor people will be disproportionately affected.

Some American conservatives have bristled at the pope’s foray into climate policy and his criticism of unbridled capitalism. Jeb Bush, the Catholic former Florida governor running for the Republican presidential nomination, dismissed the pope’s climate pronouncement, saying, “I don’t get my economic policy from my bishops or my cardinals or my pope.”

Though Bush indirectly chided Francis for straying from religion into policy, as head of state, policy is part of the pope’s remit. One of the better-known examples of papal diplomacy is Pope John Paul II’s influential opposition to communism.

Like Francis, Pope Benedict XVI warned about the impact of climate change and ecological degradation, but not to the same effect as his successor. When Francis became leader of the world’s 1.2 billion Catholics, his reputation for humility captured global attention. He famously rode the bus to work in Argentina. After becoming pope, he washed the feet of prison inmates, the elderly and disabled, breaking with Vatican tradition.

The first non-European pope in over 1,000 years, Francis has been vocal about using his moral authority to sound off on issues ranging from Syria’s civil war to the nuclear talks with Iran to the genocide dispute between Armenia and Turkey. He has also inserted himself into thorny foreign policy disputes, helping to broker talks that led to a historic rapprochement between Cuba and the United States late last year. The pope has condemned the brutality of the Islamic State, sounded the alarm about migrants dying in the Mediterranean and apologized for the Catholic Church’s role in colonialism while warning about a “new colonialism” driven by economic inequality.

Francis’s forceful diplomacy has won both converts and detractors. In the year or so after he was elected, Francis’s favorability among Americans grew, from 58 percent of those polled having a favorable view of him in April 2013 to 76 percent in February 2014, according to Gallup. But in Gallup’s latest poll, conducted in July, the pontiff’s favorability in the U.S. dipped to 59 percent. That drop was driven partly by those who identified themselves as conservative, with 72 percent of conservatives having a favorable view of Francis last year, but just 45 percent this year.

Francis is no more critical of capitalism than his predecessor, Benedict XVI, was, “but he is better at expressing the option for the poor than previous popes — that is that God’s love of the poor is critical for our understanding of his love for all of us,” Charles Clark, an economics professor at St. Johns University, told The Diplomat in an email.

“The church has always been hostile to the narrow, laissez-faire logic of capitalism, well before there was anything that could remotely be called capitalism, because it rejects the anthropology upon which this ideology necessarily rests,” Clark wrote in a recent article for Horizons, a College Theology Society journal. The “dung of the devil” comment was, after all, a quote from a fourth-century bishop, so it is the messenger, not the message, that is new.

“I do not think Pope Francis will tone anything down” while he is in the United States, Clark told The Diplomat. “Francis is a pastor, so knowing his audience, he will most likely say what he thinks they need to hear, not what they want to hear,” added Clark, who is also a senior fellow at St. John’s Vincentian Center for Church and Society. 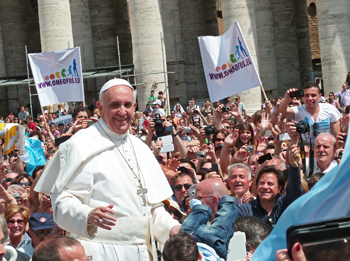 Pope Francis greets the crowd at St. Peter’s Square during a mass on May 12, 2013. The pontiff is making his first trip to the U.S. this month as he visits Washington, New York and Philadelphia.

Don Clemmer, a spokesman for the U.S. Conference of Catholic Bishops, which is helping facilitate the pope’s visit, predicted that Francis will be consistent with his message but aware of his environs. Francis “is all about dialogue and encounter, and he’s encountering a different people, a different society … and that will be a lens,” Clemmer said.

“Here, the perspective shifts,” he added. “[Francis] goes from a region of the world, Latin America, which has experienced so much of the negative effects of globalization, to the richest, most powerful nation in history.”

On the plane back from South America in July, the pope vowed to study up on American critics of his economic positions. The pontiff told reporters that if he has “not dialogued with the person who made the criticism,” he doesn’t think he has “the right” to comment on their critique, according to Catholic News Service.

Francis turned heads when, four months after he was elected, he told reporters, “If someone is gay and he searches for the Lord and has good will, who am I to judge?” That tone of acceptance was a sharp departure from his predecessor and sprouted optimism among LGBT Catholics that the Church might become more tolerant under a progressive new pope.

Francis DeBernardo, executive director of New Ways Ministry, a Mount Rainier, Md.-based ministry advocating equal treatment of LGBT Catholics, said that Francis’s leadership has had ripple effects in the United States, “where pastoral leaders are becoming more courageous to be seen as affirming of LGBT people.”

DeBernardo pointed to a statement from Blase Cupich, the archbishop of Chicago, as an example. After the Supreme Court ruled in June that gay couples have the constitutional right to marry, Cupich released a statement that, while not overtly welcoming of the ruling, echoed the Catechism of the Catholic Church’s call for respect for homosexuals. “This respect must be real, not rhetorical, and ever reflective of the Church’s commitment to accompanying all people,” Cupich said. DeBernardo said a statement like that would not have occurred under previous popes.

DeBernardo has experienced Francis’s more welcoming approach to LGBT persons firsthand. In February, DeBernardo and a group of about 50 Catholics, some two-thirds of whom were either LGBT or had LGBT family members, traveled to Rome in hopes of getting an audience with the pope. Though their request to meet with Francis was denied, they were granted “VIP seating” as part of a broader “papal audience.” On pilgrimages to Rome in the previous two papacies, the group was ignored, according to DeBernardo.

The optimism of some American LGBT Catholics is swelling ahead of Francis’s visit. Equally Blessed, a coalition of Catholic groups that includes New Ways Ministry, has written to Francis requesting a meeting while he is in the United States. A meeting between Francis and LGBT Catholics and their families is a “compelling pastoral need, and would promote great healing and reconciliation in our Church and society,” the letter stated. 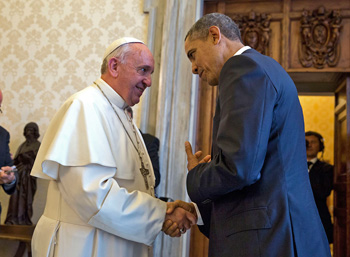 President Barack Obama with Pope Francis at the Vatican, on March 27, 2014.

DeBernardo is not expecting a change in Church doctrine toward LGBT persons, or something similarly momentous, during the pope’s U.S. trip. But even a welcoming word or two could make a difference, he said. “One of Pope Francis’s most powerful ways of influencing people is through his example, and I think that if he would set the example of being welcoming and affirming of LGBT people, and families with LGBT members, that we would have a much better Catholic Church here in the U.S.”

Reese, of the National Catholic Reporter, predicted that Francis will not wade too far into the issue of Church treatment of LGBT persons during his trip, if he does at all. “I think he’s smart enough to know that even if he whispers something about these things, they will be on the front page of the paper,” he said. The pope will stick to his message addressing economic inequality, while the press will wait with baited breath for him to utter a word on LGBT persons, Reese reckoned. “The media is very interested in all of these sexual issues because they’re easy to write about. Economics and globalization and diplomatic issues are much more difficult to write about.”

Francis himself has urged Holy See diplomats to avoid dwelling on gay rights, abortion and other culture wars at the expense of issues such as poverty and equality.

A spokesman for the Vatican’s diplomatic mission in Washington said that no one from the mission was available for an interview to preview the trip. Given his flair for surprise, only Francis can say exactly how he plans to navigate the question of LGBT rights or other sensitive issues during his U.S. trip.