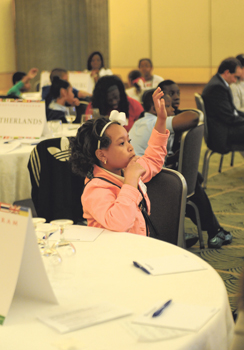 It’s late May, and 150 eager, dressed-up fifth-graders from schools across the District of Columbia are representing 50 different countries in the 38th annual Mini United Nations, a daylong event held for the last two years at the Ronald Reagan Building and International Trade Center.

A student raises her hand at a Mini United Nations discussion held in the Ronald Reagan Building and International Trade Center.

“You are young, and you are smart and you care about the future of the planet…. You make a difference, what you do here today and in years to come,” Swedish Ambassador Björn Lyrvall told the youngsters in his introductory remarks.

The students spent the day in committee-level and bilateral negotiations, debating the merits of three different proposals for confronting climate change, the topic of this year’s Model U.N. simulation.

“Bangkok is in danger of being flooded, since it’s at sea level,” said a boy representing Thailand in a breakout session with Mexico. “There’s not much clean water in our country; what we’re most concerned about is the lack of clean water,” countered a girl from the Mexico team.

Two committees ended up passing resolutions for governments to invest in renewable energy and reduce carbon emissions by 10 percent over the next five years, while the third passed a resolution that puts even more stringent demands on governments to address climate change.

The Mini United Nations event is one component of Washington Performing Arts’s Embassy Adoption Program, which each year pairs fifth- and sixth-grade classrooms in D.C. public schools with foreign embassies wanting to share their countries and cultures with local students. One of the arts organization’s signature partnerships, the Embassy Adoption Program celebrated its 40th anniversary in the 2014-15 school year, bringing 50 embassies together with 1,500 students across all eight wards of the District, and is set to expand substantially over the next couple of years.

“It’s a perfect match. We want these opportunities for students and the embassies really want to share about their country, and this provides them an ‘in’ into a school and really a deep relationship,” said Trisha Taylor, Embassy Adoption Program manager at Washington Performing Arts, which for over 40 years has connected the local community to artists through live performances and educational programs. 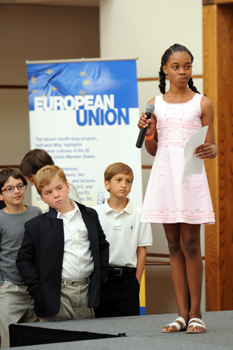 Throughout the school year, participating embassies arrange several visits with their partner class or school, showcasing their culture, art, food, history and current affairs through presentations and field trips. Last year, activities included bringing students to a Buddhist temple to meet monks and learn about meditation and traditional musical instruments (Thailand); sending the embassy’s chef to the school to cook a typical lunch of chicken, rice and empanadas (Panama); and taking kids to the National Zoo to see kiwi birds (New Zealand).

Embassies take pride in planning these local partnerships. Last year, the Japanese Embassy worked with the fifth-grade class from Garrison Elementary School to showcase traditional Okinawan culture, including eisa music and dance. The embassy also hosted a kendama competition; brought in famed Japanese artist Koji Kinutani; taught the Japanese national anthem through the U.S. Air Force Singing Sergeants; and took the children on a field trip to the Tidal Basin for the National Cherry Blossom Festival.

Meanwhile, the Embassy of Azerbaijan had sixth-graders from its partner school, Alice Deal Middle School, sing the U.S. and Azerbaijani national anthems at the country’s Republic Day reception this year. “All of us at the Embassy of Azerbaijan enjoy and appreciate participation in the Embassy Adoption Program,” Ambassador Elin Suleymanov told us. “Students learn about Azerbaijan’s culture and we learn a lot from them. The program also strengthens our connection with the District of Columbia, where we all live and work.

“This year, the amazing performance of the American and Azerbaijani anthems at the Azerbaijan Republic Day reception by the Alice Deal School sixth-graders became the highlight of the event,” the ambassador added. “This was both a demonstration of a great talent and a valuable cultural exchange by the students.”

“Most of the diplomats are very interested in showcasing the personal side of their experience in their country,” explained Kayla Gatalica, Embassy Adoption Program specialist at D.C. Public Schools (DCPS). “They like to share food, art, to talk about holidays. Many will often do lessons about a day in the life of a child in that country.”

Students in the program also spend time preparing to represent “their” country at a Model U.N. event, organized separately for fifth- and sixth-graders. The school year concludes with students paying a visit to their partner embassy to put on a final presentation that encompasses what they’ve learned over the course of the year — often including a performance of the country’s national anthem. 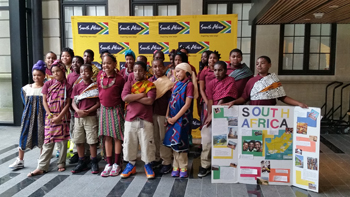 “The world gets smaller every day,” said Washington Performing Arts Vice Chair David Marventano. “One of the passions that I have is things that bring us together, which are the arts — breaking down barriers around the globe, whether it’s D.C. fifth-graders or my own children, because as every day passes, we all have to interact more, and to understand the music, the dance, the culture of other countries is so important.”

Launched by the volunteer-run Washington Performing Arts Women’s Committee in the 1970s, the Embassy Adoption Program has become so popular that the group is working on significantly increasing the number of participating embassies so that more students can gain from it.

“We’ve had great success and a huge amount of interest from teachers,” said Michelle Hoffmann, director of education for Washington Performing Arts. “Last year, we had about 90 applications for 50 spots, and we know that embassies and diplomats when they talk to each other are incredibly interested in this program.”

The group aims to get 75 embassies involved this school year and to have as many as 100 embassies on board next year. “If we stay on track with that, we’ll theoretically be reaching nearly every sixth-grader across the District…. It’s incredibly ambitious,” said Hoffmann.

Students in the program gain not only an in-depth familiarity with a particular country, but also — perhaps just as importantly — a greater awareness of the world outside of Washington.

“This is something that gives students expanded horizons, to understand that there is more than D.C. The world is a much bigger place,” said Marventano.

Jamila Thompson went through the program two decades ago as a child, and is now a teacher at Orr Elementary in Anacostia, where she has participated as a teacher for the last three years. “I was a part of the program during my sixth-grade year. Our country was Ghana, and then I studied [abroad] there in college,” she said. “So I know that this is definitely a seed that’s being planted…. It’s exciting because you get to connect the world to the classroom.”

After having partnered with Switzerland and Finland, Thompson was paired with the South African Embassy last year, an experience that inspired her and her students to work on raising money to hopefully visit the country at the end of this school year. 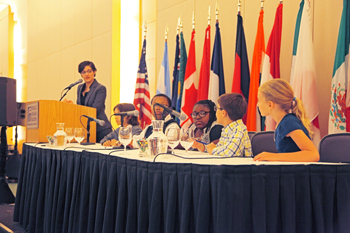 “Except [there’s] more technology and culture,” chimed in her classmate Jerome. “They got a lot of technology — robots that can control the traffic.”

Another classmate, Alphonso, added: “I’ve only been out of state. I’ve never been out of the country. So this [would be] a lifetime experience” to go to South Africa.

Laura Landstrom, who teaches at H.D. Cooke Elementary in Adams Morgan and has worked with the Embassy Adoption Program for three years running, applauds the opportunities that the program creates for disadvantaged students in particular.

Cooke Elementary is “99 percent free and reduced lunch, so a Title I high-poverty school. And it’s interesting because we have a lot of families who have moved to the United States from out of the country — from El Salvador, Guatemala, Mexico. But they haven’t gotten to see or experience a whole lot outside of the little bubble of Adams Morgan,” explained Landstrom. “This is a program that’s enabled my kids to see and do so many things that they would never [otherwise] get to do, and to see a more global view of the world.”

Landstrom’s fifth-grade class, which was matched with Thailand this past year, was among six that benefitted from a new pilot partnership between Washington Performing Arts and the U.S. Air Force Band, which sent singers and musicians to help students learn the anthems of their partner countries. Cooke students later sang Thailand’s national anthem at their year-end presentation at the Royal Thai Embassy — no easy feat with an unfamiliar language like Thai.

“I think [Ambassador Pisan Manawapat] said something along the lines of, ‘This was better than Thai children would sing it.’ He was really impressed,” said DCPS’s Gatalica. “And the kids were really excited; kids get so much pride in being able to say things in a different language. It’s also part of diplomacy and relationship building.”

In the end, for all of the academic enrichment that embassies can offer schools, breaking down barriers between people is perhaps the Embassy Adoption Program’s greatest strength.