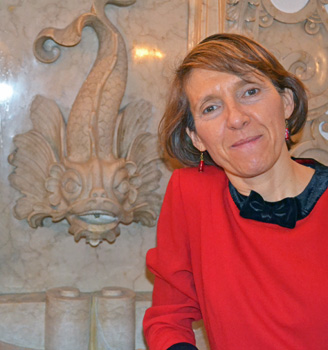 Rosa Batoréu is the wife of Portuguese Ambassador Nuno Brito and the mother of two university students. She is also the deputy chief of mission at the Portuguese Embassy and alternate representative to the Organization of American States, making her husband her boss.

Rosa Batoréu is deputy chief of mission at the Portuguese Embassy in Washington, where her husband serves as ambassador.

“I have to walk a careful line, for sure,” she told us. “I always try to avoid talking business at home. When the day is over, I try to disconnect … my nights and weekends are my quality time. The State Department and Lisbon don’t call unless it is very important.”

But that doesn’t mean she’s not in demand. “I juggle and work harder than anyone,” she said. “I have two jobs [DCM and wife], and mother when the kids were younger.”

In addition to her normal diplomatic duties, Batoréu helped to renovate the Portuguese Residence on Kalorama Road. “I’ve spent two years restoring this house and made a tea room in what used to be the ambassador’s office,” she pointed out. Before the Portuguese Chancery moved to a big brownstone mansion on Massachusetts Avenue close to Dupont Circle, the ambassador and his staff worked in the small addition attached to the residence.

The overlapping careers of the ambassador and his wife aren’t that unusual for Portugal.

“We have a lot of couples who are both in the Foreign Ministry. We are not an exception. In Portugal, you can’t discriminate on sex, race and personal status. They post couples for at least two years. It also makes sense economically. There’s a savings on one rent rather than two,” Batoréu explained. “I don’t know any other [foreign service] system similar to ours.”

Batoréu says she’s proud of the strides women have made in her country. “When young men and women come out of university, they are of equal value to society. Today, 70 percent of our university graduates are female. That’s opposite of what it was just a generation ago. Many times the girls didn’t have access to higher education. Their parents would pay for a son but not so much for a girl. And yet, girls work harder.”

Batoréu noted that out of 75 ambassadors representing Portugal around the world, a dozen are women. As much as she would like to join that distinguished group one day, Batoréu said she is currently very pleased to serve as DCM in Washington. 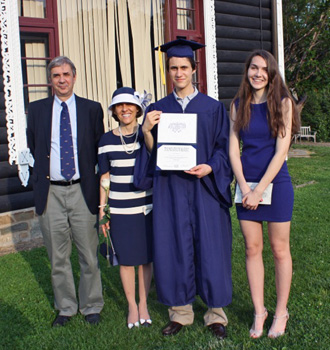 Rosa Batoréu is pictured with him and their son Alfonso and daughter Carlota at Alfonso’s high school graduation from the Washington International School.

Before coming to D.C. in 2011, Batoréu and Brito were posted in Lisbon for most of their diplomatic careers, holding various positions in the Ministry of Foreign Affairs, including a stint as senior diplomatic advisor to the prime minister for Brito from 2002 to 2005. Brito also served in D.C. on a prior occasion, from 1987 to 1993. In addition, Batoréu had a few separate assignments away from her husband, in Copenhagen and New York. Whenever they were working apart, they tried to see each on weekends and, of course, on holidays.

Interestingly, before they joined Portugal’s Foreign Service, they both shared another career, as lawyers — a professional connection that led to a personal one 30 years ago.

“We are both lawyers and met at a bar association meeting — a most unromantic place! We were near each other in line since in Portugal you always line up by your first name. Years later my husband admitted that he still remembered how I was dressed but I don’t,” Batoréu fondly recalled.

“The day before my oral exam I decided to go and watch the others. In Portugal our oral exams are open. We can watch and hear each other. I saw him and heard how brilliant he was and how intelligent,” she said. “We were married soon after we joined the Foreign Service and managed our careers so we could have children too. He traveled all the time for business and I traveled personally whenever I could…. I love to travel the world.”

Today, their 18-year-old daughter Carlota is studying in Lisbon for her bachelor’s degree in graphic design and is fascinated with art history, while their 20-year-old son Alfonso is studying business administration in Lisbon and, according to his mother, is interested in “everything, especially soccer.”

“We Skype every day, which means I have to juggle time for Lisbon. With the time difference, we usually talk when they are eating their lunch or dinner. So, I’m talking and they’re eating.”

When she’s not working, Batoréu likes to keep busy in her down time. “I have no talent but I love music,” she quipped. “As a child, I took piano for six years until my mother gave up. I couldn’t learn a thing.”

But she does appreciate music and is a regular at the Kennedy Center. “I keep every playbill; I have big boxes. Who knows when I’ll have time to read them again! I also have plenty of music on my iPod.”

Reading is another passion — minus the technology, though. “I do like to hold a real book. I like to feel the paper and turn the pages. I don’t like reading digitally at all.”

She also enjoys sports. “I love tennis and going to the gym. I also love to swim but I don’t have any time for that now,” she said. 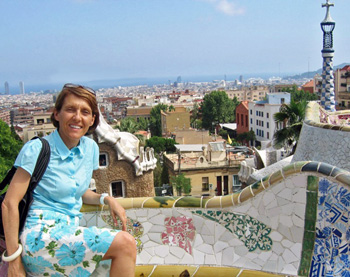 “I love to travel the world,” says Rosa Batoréu, deputy chief of mission at the Portuguese Embassy, seen above in Barcelona.

Despite the hectic pace of life, Batoréu said she’s appreciated the opportunities diplomatic life has afforded her and her family. When I asked what are the most important aspects of her life, she quickly replied, “Our children and traveling, especially as a family.”

But she has a natural affinity for her roots. “Portugal is the oldest country in Europe. It became an independent country in 1143 and Portuguese discoverers sailed all over the world,” she proudly said. “We are a very warm people. We have the Atlantic, the ocean in our blood … which is very important to us. We are mariners and many Portuguese still fish.

“We are very diverse as a people,” she continued. “Our north is nothing [like] our south. Unlike most countries, it is our north where it rains the most and is green and lush. Our northeast even has snow in the winter. The south is barren for 500 miles of beaches.”

As we ended our interview, she put her glasses away in a case that caught my eye. It’s wrapped in material imprinted with a Portuguese tile design. A tradition that’s been around for five centuries, Portuguese ceramic tile work, or azulejo, has become a symbol of Portuguese culture and graces churches, palaces and average homes throughout the country.

Batoréu seized on the subject to show off the intricate tiles that line the rooms at the residence.

“The tiles started in the Arab world. We discovered them in the 16th century and they flourished in the 17th century. When we first saw them, we wanted to use them for climatic reasons. It is very humid in Portugal because we are so close to the sea. With tiles, we don’t have to paint as often. Now the tiles have become the national art of Portugal and I love them.”