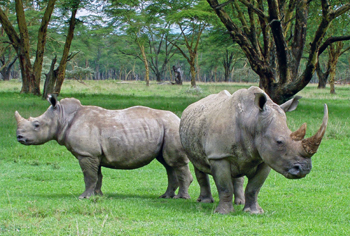 John Tanner, a popular moderate Democrat from west Tennessee, served 11 terms in the House of Representatives and likely could have served several more.

Instead, the longtime lawmaker — like many of his colleagues in recent years — walked away from the marbled halls of power on Capitol Hill in 2011, frustrated by congressional gridlock and eager to see where else he could apply his political expertise and Washington contacts. That’s why he got involved with the International Conservation Caucus Foundation (ICCF) — a place where he can still influence Congress, but from a distance and with a laser-beam focus on the environmental and conservation issues he cares about. Tanner joined the group’s board three years ago and is now its chairman.

Two white rhinos stand in Nakuru, Kenya. Rhino horn is worth more than its weight in gold, leading to an explosion in poaching.

“I got involved in this on one very simple premise,” Tanner said with his rich Tennessee drawl during a late February afternoon interview at his office at the Prime Policy Group, a lobbying and government relations firm in midtown Washington. “We’ve got one planet here and if we mess this up we’ve got nowhere to go. We have to take care of what we’ve got if we’re going to pass it on to our children.”

Tanner said ICCF distinguishes itself from some other environmental groups by being more bipartisan and moderate in its approach. Its role model is President Theodore Roosevelt, who championed both the preservation and development of America’s natural resources.

“It is an organization that has conservation at the core,” Tanner said. “We don’t mind if you want to cut down a tree. That’s fine — just plant two. We don’t say, ‘Don’t use natural resources,’ but we do say, ‘Replace and conserve what is irreplaceable.’ It’s here to use but don’t abuse it.”

In the decade since its inception, ICCF has become a nonprofit fixture on Capitol Hill, coordinating government, business and NGO leaders to set a conservation agenda that can penetrate Washington’s fiercely partisan walls. ICCF supports the Congressional International Conservation Caucus, which counts as its members one-third of the House and one-fourth of the Senate.

While most laud the work ICCF does, the organization does have its critics. A Mother Jones article in 2013 called it a “mysterious charity based out of a two-story townhouse in the posh Georgetown neighborhood of Washington, D.C.”

“It may not have a glass-and-steel headquarters, but the ICCF counts among its supporters some of America’s most powerful corporations and special interests,” the magazine wrote, citing ExxonMobil and trade groups like the American Petroleum Institute and the Malaysian Palm Oil Board that represent “environmentally destructive industries.”

Corbin Hiar wrote that ICCF provides these corporate backers with access to its large Rolodex of legislators. The article also discussed the lavish junkets — including an African safari that cost $47,000 — that ICCF provides to lawmakers under the guise of education. Tanner conceded that “they are nice trips” but also said members of Congress and others who travel on the ICCF’s dime get to see firsthand the environmental and conservation struggles in developing countries, giving them a unique perspective and hopefully instilling a desire to work for change.

Tanner said he and other ICCF officials also travel to countries in Africa and elsewhere to preach the importance of protecting wildlife — not only as a humanitarian gesture but as a means of protecting the tourism economy.

“What we have tried to impress on the parliamentarians in countries like Kenya, Tanzania, Madagascar, South Africa, Gabon and other places, is that the wildlife is what makes Africa unique,” Tanner said, gesturing to some photos on his office wall that his wife took on a recent Kenyan safari. “If they lose that uniqueness, they have lost a real asset. There is nowhere else in the world you can go and see lions and giraffes and elephants.” 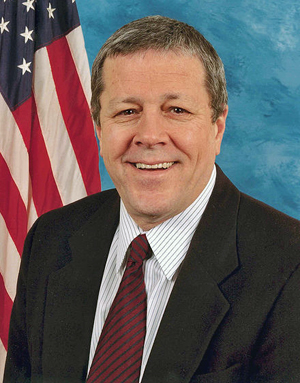 He also dismissed critics who complain that the ICCF hasn’t taken a position on climate change. He said the polarizing issue would divide one of the few truly bipartisan caucuses in Congress.

“We try to stay apolitical because we think that that is important to bridge the gap between the left and the right on conservation,” he said. “I guess it’s a fair criticism, but I’m not sure all the members of the ICCF would agree on [the issue]. It’s very political, really. We don’t lobby bills. We’re trying to bridge the gap rather than trying to alienate people.”

During his time in Congress, Tanner was a founding member of the U.S. International Conservation Caucus and chaired the House delegation to the NATO Parliamentary Assembly. He also served on the House Foreign Affairs Committee, as well as the powerful Ways and Means Committee. Since retiring from Congress, Tanner has also joined the boards of the Center for Strategic and International Studies and the Blue Dog Research Forum.

In recent months, Tanner and the ICCF have stepped up their work on behalf of endangered elephants, rhinos and other animals that are being targeted by poachers who make big bucks selling ivory and rhino horns, as well as pelts and other animal products on the black market. It’s an issue that environmentalists of all political stripes agree has reached crisis proportions.

Experts say an unprecedented spike in illegal wildlife trade is threatening to overturn decades of conservation and development gains. As populations and economies have grown in East Asia, the demand for wildlife products has surged, sending the black market price of tusks, horns and hides to historic highs. Ivory, specifically, can sell for $1,500 a pound while rhino horn is worth more than its weight in gold, able to fetch up to $50,000 a pound.

Wildlife products are easily converted into cash and used to purchase weapons and fund transnational crime syndicates and violent terrorist organizations. According to the Stimson Center, wildlife has become the fourth-largest illicitly traded good in the world, representing a $19 billion industry. Yet punishments for poaching, compared to drug or arms trafficking, are light, making it a low-risk, high-reward venture.

As a result, an important shift has taken place, with the United States and other governments increasingly recognizing that wildlife poaching is not just an environmental issue but a national security threat.

The document — which was released ahead of a major international wildlife trafficking conference hosted by the British government — admits that “the United States is among the world’s major markets” for wildlife goods. But it adds that in Asia, “increased demand for ivory and rhino horn stems from a rapidly expanding wealthy class that views these commodities as luxury goods that enhance social status.”

Rhino horn is reputed to be an aphrodisiac, but Asians, particularly Chinese and Vietnamese, also buy the expensive ground horn to relieve dizziness, boost energy, nourish the blood, cure laryngitis and remedy a variety of other ailments, from cancer to hangovers.

But it’s a race against time, and extinction.

In 2013, the United Nations warned that elephant poaching is the worst it has been in a decade. Wildlife groups estimate that more than 30,000 elephants are being slaughtered each year, out of a dwindling worldwide population of 500,000 or fewer. 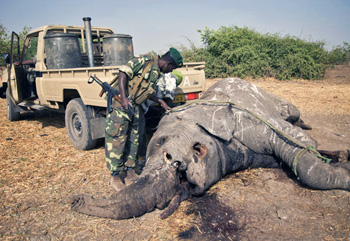 An elephant carcass is turned over to look for bullet wounds at Zakouma National Park in Chad. A March 2013 U.N. report, “Elephants in the Dust – The African Elephant Crisis,” found that elephant poaching doubled and illegal ivory trade tripled in the last decade, endangering already fragile populations in Central Africa, as well as previously secure populations in West, Southern and Eastern Africa.

Similarly, rhino poaching rates in Africa have skyrocketed. The U.S. Fish and Wildlife Service says more than 1,000 rhinos were killed last year, compared to 100 a year a decade ago. According to United for Wildlife, 95 percent of the world’s rhinos have been lost in the last 40 years.

All that comes despite increased surveillance efforts in countries that actively patrol their nature reserves, such as South Africa, which in recent years has seen a new national record of rhino killings. Hundreds of elephants have been killed in Cameroon’s Bouba N’Djida National Park. And in Tanzania, President Jakaya Kikwete announced last month that elephant herds were being decimated in his nation, where the population in one major wildlife sanctuary plunged from nearly 40,000 in 2009 to just 13,000 today.

“The poaching in Africa is a crisis situation and we are finally realizing it’s a national security situation, too, because it’s financing a lot of terrorism,” Tanner said.

Al-Shabaab, a wing of al-Qaeda based in Africa that has contributed to deep instability in Somalia, has paid for a good chunk of its operating expenses by poaching elephants. The Lord’s Resistance Army, a Ugandan militant movement infamous for forcing children to fight in its ranks, also reportedly poaches and sells elephant ivory.

The recent rise in wildlife product prices is fueling better-organized, better-funded and better-armed criminal and terrorist networks, and even militias, compounding the challenges faced by those charged with protecting endangered animals. In fact, animals aren’t the only ones in the crossfire. Over the past decade, hundreds of African wildlife rangers — who must patrol vast stretches of territory and often lack the sophisticated gear that poachers have at their disposal — have been brutally murdered by highly skilled poachers.

Last summer, the New York Times reported that a militia of infamous elephant poachers ambushed the headquarters of a wildlife reserve in the Democratic Republic of Congo and killed five people and 14 okapi, a rare animal with a giraffe-like neck and zebra-like legs. According to the newspaper, “one guard who narrowly escaped said the attackers sliced open the chest of a downed colleague and ate his heart.”

African militaries sometime try to intervene, but not always successfully.

The ICCF is working to raise awareness of the dangers of poaching, and Congress seems to be listening, even in this era of budget cutbacks. Lawmakers passed a 2014 omnibus spending bill early this year, creating a new $45 million fund to combat wildlife trafficking and maintaining or raising funding levels for key international conservation programs. This additional funding reflects the successful efforts of international conservation groups to educate policymakers about the African poaching crisis and its direct links to instability, armed conflict and terrorism — not to mention its impact on economic development, poverty alleviation and even food and freshwater security.

Tanner said he views his role with ICCF as helping to keep his former colleagues on the Hill up to speed about poaching and conservation issues in general.

“We want the Congress to be not only informed but to be supportive of what we’re trying to do, particularly when we bring parliamentarians from other countries here to see that no matter how partisan the body is, that this issue can transcend partisanship,” Tanner said. “You have the people on the far left and right who are involved with what we’re trying to do. I think that’s a very constructive, positive thing for governance, for people to agree on something, and this is something that is nonpartisan.”