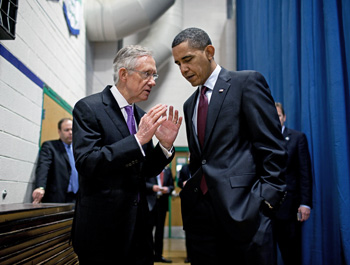 If President Obama wants to secure “fast track” authority for separate free trade deals with Pacific Rim and European Union nations, the road goes through Senate Majority Leader Harry Reid — and it’s already shaping up to be a bumpy ride.

The Nevada Democrat quickly shut down the request Obama made for trade promotion authority in his State of the Union address, throwing a wrench in the White House’s plan to finalize the Trans-Pacific Partnership (TPP) and, eventually, the Transatlantic Trade and Investment Partnership (TTIP) with the EU.

“I’m against fast track,” Reid said in a late January press conference, later adding, “Everyone would be well advised just to not push this right now.”

Trade promotion authority (TPA) allows a president to submit free trade agreements to Congress for an up-or-down vote — without giving lawmakers the ability to make changes — something Obama’s predecessors have been able to do with past trade deals.

TPA is seen as critical to easing the passage of highly complex trade agreements, in part because other nations are more likely to sign onto the pacts if they know Congress can’t alter them. Opponents argue fast track approval robs lawmakers of the ability to make important amendments to free trade agreements that will impact millions of American workers. Democrats in general are leery of FTAs, which they say erode jobs and wages at home, leaving the president without the support of his own party in trying to move a major item on his foreign policy agenda.

The current trade negotiations with Asia and Europe have a symbolic element to them as well this year, which marks the 20th anniversary of the North American Free Trade Agreement (NAFTA) that liberals have long resented.

“Unfortunately, the TPP really does follow the same footsteps of NAFTA by removing the ability of government to protect workers, communities and the environment and putting more power into the hands of free markets and multinational corporations,” said Ilana Solomon, responsible trade director with the Sierra Club. “These two agreements [TPP and TTIP], basically, are cut from the same cloth.”

The TTIP between the United States and the 28-member EU would be the world’s largest trade deal, encompassing a relationship that accounts for nearly half of the world’s total economic output. It was first announced last summer and is years away from being finalized. The TPP involves a dozen Pacific Rim nations, mostly in Asia but also Latin America, that account for 40 percent of the world’s GDP. The sweeping deal has been in the works since 2005, with the U.S. joining talks in 2009.

TPP boosters say Obama is entering a period where he needs some deliverables.

“We’re hoping to build some momentum here in the coming weeks, and I think people would argue that if things aren’t moving by a certain point, then it would be difficult to see much action,” Christopher Wenk, senior director of international policy with the U.S. Chamber of Commerce, said in an interview.

After missing self-imposed deadlines to finish the agreement late last year, the president is heading to Asia in April, where the prospective deal will be one of the main topics. And without winning fast track authority by then, the November mid-term elections could thwart any attempt of gaining it during 2014.

Secretary of State John Kerry doubled down on the Obama administration’s commitment to finalizing the TPP when Japanese Foreign Minister Fumio Kishida visited Washington in early February, calling the deal “one of the most important things we can do for our countries’ economic futures.”

“There are still a few issues left where we need to work through them,” Kerry said. “But once we do it, that agreement will mean more jobs, more growth, greater stability and greater security not just for the United States and Japan but throughout the Asia-Pacific region.”

Strategically, the push is part of the Obama administration’s “pivot” to Asia, as it’s presented the deal as an opportunity to deepen ties with economically growing Pacific nations and, at the same time, perhaps tame Chinese ambitions in the region. After initial reluctance, China has signaled interest in joining the talks — and the White House has hinted at permitting it.

The White House is also presenting the TPP as an economic boon. Chief of staff Denis McDonough told CBS’s “Face the Nation” that it would amount to $130 billion of additional exports per year, and that each $1 billion in additional trade would support between 4,000 and 5,000 jobs.

But opponents, who include unions, environmental and social justice groups, say it would drive more U.S. jobs overseas to countries with lower wages while boosting corporate profits and the very income inequality that Obama has railed against. For example, the first year of the free trade agreement between the U.S. and South Korea that Congress struck in 2011 shed 40,000 American jobs, said Robert Scott, an economist with the Economic Policy Institute. “Projected increased trade by itself tells you nothing about employment impacts,” he recently wrote. “Exports support U.S. jobs, but imports destroy them.”

Reid hews more to that view — and the broadside he dealt Obama left some lawmakers questioning whether the White House seriously hashed out the president’s position with Reid, a close and often forceful ally.

“I don’t really understand the president saying in the State of the Union, basically, send me [trade promotion authority] and then Harry Reid saying immediately it won’t come to the floor in the Senate,” Sen. Johnny Isakson (R-Ga.), the top Republican on the Finance Committee’s International Trade, Customs and Global Competitiveness panel, said in an interview. “I don’t think Harry Reid did that without at least a wink and a nod, and the administration knew it. If that’s true, then somebody’s being disingenuous.”

“He’s not going to get [trade promotion authority] if he can’t talk Harry Reid and the Democrats into even bringing it up, and Reid has got to bring it up,” Sen. Orrin Hatch (R-Utah), the ranking Republican on the Senate Finance Committee, which oversees free trade deals, told reporters.

Hatch added: “He softened it a little bit, but not enough. But it takes presidential leadership. You can’t just sit around and play with it. You’ve got to say, ‘This is what I’ve got to have. And I want it.’ And then you’ve got to get on the phone and call these senators and say, ‘I need your help.’ And he doesn’t do that.”

The topic didn’t surface when Reid and Obama met in early February, despite the disagreement being out in the open. Proponents of the free trade deals and of fast track authority suggest Reid’s opposition isn’t insurmountable, as they note he railed against smaller pacts that Congress approved in 2011 with Colombia, Panama and South Korea.

But Obama had fast track authority at the time. Now he doesn’t. Still, Wenk said he’s encouraged by some of the meetings he’s had with lawmakers.

“There is Democratic support out there. Obviously trade issues are difficult for some up there because of certain constituencies — that makes it difficult for members to come out too early,” Wenk said. “We’ve been pleased with what we’re hearing.”

Wenk added that the ascendency of Sen. Ron Wyden to Finance Committee chairman could smooth a path for trade promotion authority. The Oregon Democrat, who moves into the slot vacated by Max Baucus, America’s new ambassador to China, has voted for every free trade agreement put before him in his 20 years in Washington.

“In many ways, all eyes are on Wyden,” Wenk said. “Wyden’s no stranger to any of us. He’s been in the Senate a long time.”

Critics of TTP and TTIP are similarly focused on Wyden. They say his concerns about the transparency of TTP negotiations — lawmakers have had little access to the details — are encouraging. Trade deals are usually discussed in private for fear of a public backlash while thorny issues are being ironed out, but criticism of this closed-door approach has increased because of the sheer scope of the current deals.

“The TPP has been negotiated for four years now in virtually complete secrecy,” said Solomon, of the Sierra Club, who added, “There has been very little sign that the EU-U.S. trade agreement is going to be more transparent than the TPP.”

And while the spotlight is on the Senate, it’s far from clear whether support for trade promotion authority in the Republican-controlled House is ironclad.

Some conservatives are wary of granting Obama more power, even if it is to negotiate a free trade agreement, which Republicans and the business community generally support. Those lawmakers have slammed the president’s use of executive authority, and they say awarding the White House freer rein to hammer out the TPP and TTIP would be more of the same.

“Let me just say that there’s a lot of distrust between the president and the House of Representatives, and I don’t think that anyone feels thrilled about giving him any additional powers because, from our perspective, he has shown that he is not really interested in working in a normal legislative way,” Rep. Ed Whitfield (R-Ky.), said in an interview. “He likes to take unilateral action.”

Zachary Colman is a freelance writer in Washington, D.C.