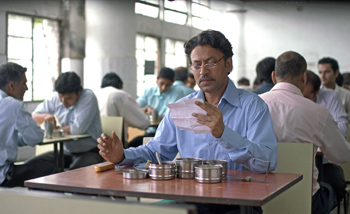 Irrfan Khan is an aging widower who finds a note mistakenly given to him by a lonely wife in “The Lunchbox.”

The Indian independent film “The Lunchbox” marks a stunning feature debut from Indian writer-director Ritesh Batra, who deftly portrays the accidental correspondence between a lonely wife and an older worker awaiting retirement. Filmed on location in Mumbai, the crisp, steady cinematography shot with the Arri Alexa digital video camera by Michael Simmonds creates an authentic background humming with details. The audience receives a vivid sense of how oppressively crowded life can feel in the big city while catching occasional moments of peaceful solitude cherished by the protagonists.

For his assured direction of “The Lunchbox,” Batra has already won a slew of awards around the world. Much of the credit for the film’s success also goes to a talented ensemble cast, led by the three principal actors, for successfully conveying their characters’ ranges of emotions. Distinguished Indian actor Irrfan Khan, who has been lauded for his work in both Bollywood (“Paan Singh Tomar”) and English-language films (“The Life Of Pi,” “Slumdog Millionaire”), holds down the center of “The Lunchbox” with a quietly powerful performance as aging widower Saajan Fernandes, who’s counting his days until early retirement after 35 years in the Claims Department.

Indian actress Nimrat Kaur (“Peddlers”), who subtly depicts a suffering young wife, Ila, holds her own against the more experienced Khan. Their characters’ virtual relationship gradually develops in a believable fashion, even though they are generally not depicted together in the same frame.

Often characterized as the poster boy of Indian New Wave Cinema, Nawazuddin Siddiqui, who had starring roles in three films at Cannes in 2013 (“Monsoon Shootout” and “Bombay Talkies” in addition to “The Lunchbox”), provides a stark contrast to his stoic elder, Khan, with a boisterous portrayal of Shaikh, the overeager young Turk that Saajan is assigned to train as his replacement.

Bored in a lifeless marriage in which she’s stuck in her home nearly the entire time, Ila spices up how she cooks the lunch of her distant husband Rajeev (Nakul Vaid) in an effort to get his attention. When the lunchbox is returned empty, she excitedly tells her upstairs neighbor she calls Auntie (the voice of Bharati Achrekar). After questioning Rajeev, Ila figures out he ate something else, so the lunchbox was somehow mis-delivered. Auntie suggests that Ila enclose a note in the lunchbox to the unknown person who licked it clean, which turns out to be Saajan. Both rather lonely, Ila and Saajan eventually share their secrets by correspondence, an increasingly risky interaction that changes both of their lives permanently. 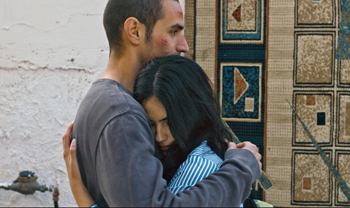 After the disappointment of directing “The Courier,” 2012’s English-language dud that went straight to video, respected Palestinian filmmaker Hany Abu-Assad (“Rana’s Wedding”) gets back in the saddle with the gripping thriller “Omar.”

He also gets back to basics: “Omar” is the only Palestinian feature film he’s made since 2005’s “Paradise Now.” Returning to his Palestinian roots has served Abu-Assad well: “Omar,” which won a Best Foreign Film Golden Globe, is the first Palestinian film to be nominated for a coveted Academy Award for Best Foreign Language Film.

At the Dubai International Film Festival, Abu-Assad claimed the best director win for his confident direction of a skilled ensemble cast and a deft screenplay blending a number of genres: political thriller, youthful romance and coming-of-age story.

Dealing with the constraints of living in occupied territory, young Palestinian baker Omar (Adam Bakri) maintains a pretty positive attitude, doing what he has to do to survive. He regularly risks detention by breaking the rules of the Israeli occupation, climbing over a barrier wall separating him from his best pal, Tarek (Eyad Hourani), and his secret girlfriend Nadia (Leem Lubany).

Omar’s disobedience escalates when he, Tarek and their lifelong friend Amjad (Samer Bisharat) train for and conduct a guerrilla mission to shoot an Israeli soldier. The security forces eventually arrest Omar, who’s tortured in prison, where Israeli officer Rami (Waleed Zuaiter) coerces him to act as an informant. Omar agrees and gets out, intending to play both sides while staying true to his beliefs, but such a treacherous balancing act is easier said than done. Nobody believes for sure if he can be trusted, and he does not know whom he can trust.

The reasonably quick pace keeps the action flowing freely and is easily digestible by any audience. Abu-Assad’s script has a surprisingly well-structured plot for something he claims to have largely dashed off in four hours after awakening in the middle of the night despondent over the train-wreck-in-the-making shooting of “The Courier.” The screenplay of “Omar” adroitly addresses the moral ambiguities faced by the eponymous protagonist, who is always striving to do the right thing despite the difficult ethical choices he is forced to make. Unfortunately, he is not able to please everybody, and that includes audience members who may be unhappy and opposed to the decisions he makes. 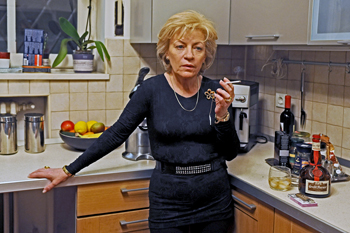 Luminita Gheorghiu gives a tour-de-force performance as an upper-class Romanian woman who will protect her son at all costs in “Child’s Pose.”

Romanian writer-director Călin Peter Netzer’s “Child’s Pose” was a sleeper entry without much advance buzz at the 2013 Berlin International Film Festival, where the director and the film surprisingly sneaked to the victory podium, capturing both the top Golden Berlin Bear and the FIPRESCI Prize. Netzer’s nervous direction maintains a building sense of disorienting tension throughout the film, while his well-schemed screenplay, co-written by Razvan Radulescu, delivers brilliant, sharp social and political commentary tinged with witty, dark humor.

Glory must also be bestowed on frequently outstanding Romanian New Wave actress Luminita Gheorghiu (“4 Months, 3 Weeks and 2 Days,” “The Death of Mr. Lazarescu”) for another mesmerizing turn as a complex female protagonist. Gheorghiu’s tour-de-force performance boasts plenty of lengthy speeches and extensive close-ups in which she is dominating the screen and the viewer’s attention. As in her previous films, Gheorghiu’s character is a fascinating player in a corrupt, Kafkaesque Romanian society that still has not quite shaken the brutal legacy of Nicolae Ceaușescu after the fall of communism.

As a driven, affluent architect in Bucharest, Cornelia Keneres (Gheorghiu) lives a successful, privileged existence, exemplified by her lavish 60th birthday party frequented by the upper echelons of Romanian society. Yet she’s not pleased that her spoiled son Barbu (Bogdan Dumitrache) has distanced himself from her life, blaming the separation on the undue influence of his girlfriend Carmen (Ilinca Goia). Of course, she’s also greatly disappointed that never-do-well Barbu, now in his 30s, still has not gotten his act together.

His persistent troubles culminate in a lethal auto accident that kills a teenage boy. The acute danger to her son activates Cornelia into assuming protective mother-bear mode, big time. She goes to great lengths to defend her son by twisting the facts, spreading bribes, and doing whatever it takes to keep him out of prison. But she finds that some people, such as businessman Dinu Laurentiu (chillingly played by Vlad Ivanov), keeping coming back for more, leaving no end in sight to Cornelia’s campaign of influence-peddling.

The 22nd Environmental Film Festival in the Nation’s Capital (March 18-30) returns with a behemoth presence at many venue partners throughout the area, including embassies in D.C. In partnership with the Embassy of Indonesia, “The Jungle School” plays at the National Museum of Women in the Arts (Tue., March 25, 7 p.m.), and in cooperation with the Bhutan Foundation, Sundance World Cinema Documentary Cinematography Award winner “Happiness” (Thu., March 27, 7:30 p.m.) screens at Landmark’s E Street Cinema.

The Freer Gallery of Art screens “Beyond Beauty: Taiwan from Above” (Sat., March 22, 2 p.m.), the 2013 Golden Horse Award winner for Best Documentary.

Montreal-based Caroline Martel presents her documentaries “Wavemakers: Following the Legacy of the Ondes Martenot” followed by “Phantom of the Operator” (Sun., March 2, 4 p.m.).