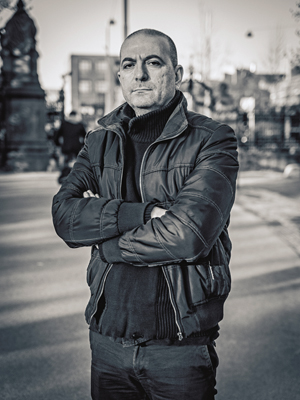 Writer-director Hany Abu-Assad’s “Omar” is the first Palestinian film to be nominated for an Academy Award for Best Foreign Language Film.

Respected Dutch-Palestinian writer-director-producer Hany Abu-Assad, a native and current resident of Nazareth, formerly worked as an aeronautical engineer in the Netherlands, where he studied aerodynamics. Despite the unusual career path that delayed his start in filmmaking, he possesses the rare distinction of helming two movies nominated for the Academy Award for Best Foreign Language Film (and the only two Palestinian films ever nominated in that category): Golden Globe winner “Paradise Now” (2005) and “Omar” (2013).

Abu-Assad, speaking to us at the Jewel Hotel in midtown Manhattan, admitted that the anticipation of the Oscar race can be grueling. “The first time, it was fun because it’s the first time, but the disappointment was really heavy because you’d hear someone else’s name and you are disappointed whether you like it or not. Because I know the taste of disappointment, I’m like, ‘Oh no, I have to go through this again!’ I’m traumatized,” he said. “The Oscar is so tense for everybody. Your legs will bend because of the tension.”

Egyptian-American filmmaker Jehane Noujaim’s highly praised “The Square” about Egypt’s revolution has also been nominated for an Oscar. Asked if there’s a renaissance of Middle Eastern film, Abu-Assad replied, “I hope so…. The Middle East deserves attention since they’ve been neglected. It’s not because there’s no talent. I think it was a truly political decision to neglect them. When the mainstream neglects them, it multiplies.”

Abu-Assad understands neglect. He came up with the plot for “Omar” while shooting “The Courier,” his 2012 dud about a carrier hired to deliver a mysterious case to an underworld hit man. The filmmaker said he “felt like it was not going to be a good movie. And you want to escape — well, not escape — survive the project. That night, I remember waking up at four o’clock in the morning sweating in a panic, and I was thinking, ‘Oh my God, I need a project I can rely on after ‘The Courier.’ Think!’ And I came up with the movie in four hours.

“Almost everything was done in a panic in four hours,” he added. “Panic will let you think very sharp, and all your knowledge you have will be very well used.”

That panic resulted in “Omar,” the story of a Palestinian baker who is arrested after the killing of an Israeli soldier and, after being tricked into an admission of guilt by association, agrees to work as an informant.

Abu-Assad calls “Omar” a love story and political thriller with a mélange of cinematic influences, including “the meat of an American thriller like ‘No Way Out’ or ‘The Firm,’ the mystique of French thrillers like ‘Le Samouraï,’ and the humanity of an Egyptian thriller like ‘There Is a Stranger in Our House.'”

“It is a combination of a coming-of-age story with a genre thriller,” he explained. “I love movies that challenge my moral judgment or any judgment like political judgment.”

Striking moral and political chords is not hard to do when it comes to the Israeli-Palestinian conflict. Asked if audiences in Palestine have seen “Omar,” the filmmaker reports, “Yes, and most of the reactions were excellent. And I feel it succeeded because I don’t want to make a film just for sophisticated audiences or festivals like Cannes. I really want to do a movie for the people and for my mother to understand it and enjoy it. Most of the reactions in Palestine were excellent.”

He describes the audience reaction in Israel as “mixed, though I have to say it was mostly positive, and I was really surprised. I was thinking it would be more hostile reactions. The hostile reactions were based on political ideals, not the quality of the movie.”

The director used the example of the mobster classic “The Godfather” as a film where morality can be divorced from cinematic achievement. “After seeing the movie, crime is still crime, but you appreciate that it challenges your ideas. You appreciate it so much because you felt sympathy with someone who, in reality, you would never feel sympathy for. I tell everybody, we can discuss politics, but movies are about emotional involvement with characters you can’t be with in reality.”

As for reality, Abu-Assad said he’s hopeful about the latest Palestinian-Israeli peace push spearheaded by Secretary of State John Kerry. “I am optimistic. Every conflict will end. Endless conflict doesn’t exist. Whether it’s tomorrow or after a year, I can’t judge, but I am optimistic we are on our way to solve this problem.”

Noujaim Digs Deep into Egypt’s Problems, Protests, in ‘The Square’

Award-winning Egyptian-American filmmaker Jehane Noujaim first gained widespread notice as director-executive producer of the 2001 feature documentary “Startup.com,” which traces the dot-com internet start-up boom and bust of the 1990s. With her latest documentary, “The Square,” she chronicles the ups and downs of a very different revolution: Egypt’s Arab Spring-inspired uprisings. 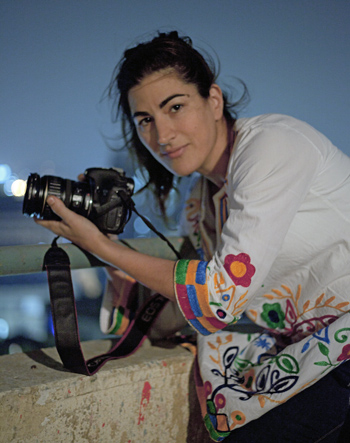 Jehane Noujaim directed “The Square,” an inside look at the Egyptian Revolution.

After a well-received screening in January at the Museum of Modern Art in New York, Noujaim talked with The Diplomat about “The Square,” which focuses on the captivating stories of six protesters whose demonstrations in Cairo’s Tahrir Square sparked the geopolitical-shaking Egyptian Revolution in January 2011.

The filmmaker said she’s excited that the documentary — for which she was recently nominated for an Oscar — is being seen by American audiences. “On the U.S. side, we’ve had amazing screenings in high schools and colleges. One young woman, 16, came up to me and said, ‘I don’t know anything about the Middle East or about Egypt. I’ve never followed any of this. But this, to me, is about fighting for what you believe in. These people that I just saw felt so alive and connected to what they wanted, putting everything on the line to fight for what they believe in.'”

While Egyptians may want Americans to better understand what’s happening in their homeland, more than a few want to better understand America’s oscillating policy toward Egypt and specifically the Muslim Brotherhood, whose leader, Mohamed Morsi, won the country’s presidential election but was pushed out of power by the military after widespread public discontent. Today, the military is back in charge while the Brotherhood has been outlawed. Somewhere in between are the idealistic protesters who pressed for change but seemed to have removed one autocratic system — that of longtime ruler Hosni Mubarak — only to have it replaced by the Brotherhood and now the military.

Noujaim recalled a meeting that one of her subjects, Ahmed Hassan, had with New York Times columnist Thomas Friedman in which he voiced a common complaint among Egyptians. “At the end of the interview, Ahmed turns to him. ‘But I have a question for you, Mr. Thomas. The United States says they’re friends with Mubarak. They’re friends with the military. They support the revolutionaries and the protesters. And then they support the Brotherhood. So I don’t understand who Americans are friends with,'” Noujaim recounted.

“I think there’s confusion in Egypt as to what exactly the U.S. supports,” Noujaim reflected. “The military has been supported by the U.S. for years. In terms of thinking about U.S. aid, an important conversation going forward is thinking about a redefinition of what aid should look like. Why is it continually military aid? Let’s think about whether aid can go toward education, toward hospitals, what people actually need.”

And at the moment, the director admits that Egypt needs all the help it can get. “In Egypt, we’re going through a very difficult time,” Noujaim told us. “It’s a very dark time where there’s still human rights abuses that are happening. The country is still very divided.”

But she added: “I have great optimism because of the people that I followed. I think that this revolution has gone in waves…. I have a friend who was arrested a week and a half ago. He was the bureau chief of Al Jazeera’s English office. He was accused of being part of the Brotherhood, which is not a reason one should be jailed anyway, but the fact was that he was basically interviewing Brotherhood members. And so there are many human rights abuses happening. Right now, there are people being jailed for no reason. The Brotherhood is being persecuted.

“But you talk to people who have been a part of this movement. You talk to Ahmed. He is optimistic, actually. He says, ‘I’m talking to people on the street. People are smarter than what the news is making them out to be. People know when they are being manipulated. They know the corruption that’s going on. And there will be a third wave.’

“What we’re hoping in this film is to give voice to these disorganized social movements that are still struggling to find a place,” Noujaim said. “The struggle continues. People are still on the ground fighting. We’ve been incredibly blessed to have such support for this film because there is an attempt by the military and the government to whitewash the last three years. It’s so important to have a film like this come out so that people can discuss and look at both the positives and the huge mistakes, the human rights abuses, that have happened over the last three years. Because if we ignore them, we allow them to continue.”