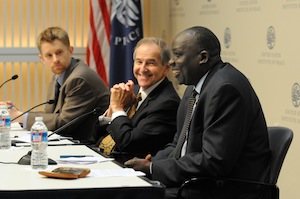 It is not often that the world gets to witness the development of a new nation from scratch, but that is exactly what’s happened over the past year with South Sudan.

The new nation on the fringe of the southern border of the Sahara celebrated its first Independence Day on July 9. Eighteen months prior, the people of South Sudan voted almost unanimously to secede from the North. While the international community largely embraced and welcomed its newest member, the honeymoon period was short-lived, and the challenges of building a state from the rubble of more than a half-century of war became clear.

South Sudan’s first “birthday” offered a unique opportunity for academics and diplomats alike to reflect on that tumultuous first year. One such discussion was held July 9 at the U.S. Institute of Peace, where representatives from the U.S. and South Sudanese diplomatic corps drew a packed auditorium.

The panel included Princeton Lyman, the U.S. special envoy for Sudan and South Sudan, Dhanojak Obongo, chargé d’affaires for the South Sudanese Embassy in Washington, and moderator Jon Temin, director of USIP’s Sudan Program.Temin opened the discussion by congratulating the South Sudanese on their first independence celebration. He praised the generally peaceful path the country took toward independence, calling it a “remarkable achievement.”

From left, moderator Jon Temin, U.S. special envoy for Sudan and South Sudan Princeton Lyman, and Chargé d’Affaires for the South Sudanese Embassy in Washington Dhanojak Obongo discuss “South Sudan: Beyond the First Year” at the U.S. Institute of Peace on July 9.

In January 2011, nearly 99 percent of eligible voters in South Sudan opted to formally split from Sudan. The overwhelming turnout and referendum results garnered the support of the international community and led to eventual membership in the United Nations. Omar Hassan al-Bashir’s government in Khartoum even accepted the results a month later, clearing the way for South Sudan to become the world’s newest nation (also see the cover profile “Southern Sudan: Birth of a Nation or World’s Newest Failed State?” in the February 2011 issue of The Washington Diplomat.)

The peaceful expression of democracy was in stark contrast to the decades of violence between the mainly Christian and animist black Africans in southern Sudan and Arab Muslim government forces from the north. Since then, however, peace has remained elusive for the South’s 10 million inhabitants.

Major issues such as oil sharing between South Sudan and its northern neighbor remain unresolved, with Juba cutting off oil production earlier this year, crippling the economies of both nations (although the bulk of Sudanese oil is located in the south, the pipelines are in the north).

Skirmishes along the contested border area have also broken out, and relations between South Sudan and Sudan remain highly combustible.

‘Writing off Sudan is not an option’

“South Sudan’s first year of independence has been marked by important achievements for which we credit the government,” Ambassador Lyman said, praising the constitutional process, legislative progress and human rights efforts, including the removal of all child soldiers from South Sudan’s military.

Lyman also cited the quick advances that South Sudan has made in health and education, but not before calling on the people of the young nation to avoid getting mired in sectarian violence.

“This cycle of violence must end,” he declared, referring to the dramatic increase of tribal conflict in the country, especially in Jonglei State, that left hundreds dead earlier this year. He called on the South Sudanese to view Sudan and other countries as examples of how the absence of national identity can lead to violence, and for the people to embrace their “shared destiny.” 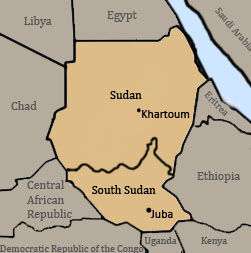 Lyman also emphasized the need for cooperation between Juba and Khartoum.

“Writing off Sudan is not an option,” he said. He urged both governments to overcome the legacy of exploitative relations and open a new chapter, not just aim for a cold peace.

Obongo started off on a lighter note, drawing laughter from the audience by joking that Lyman apparently needed to print new business cards because he has yet to print cards to include “and South Sudan” to his moniker of “U.S. Special Envoy to Sudan.”

Turning to more serious matters, the diplomat specifically detailed some of the legal frameworks established in South Sudan, including the interim constitution, officially called the Transitional Constitution of the Republic of South Sudan (TCRSS). Obongo also detailed the establishment of the legislative and judiciary branches of the government, as well as a “fourth arm” of government: the media and anti-corruption measures.

“I believe the future of South Sudan is very bright,” Obongo said. “It is not easy, but we are optimistic we will achieve all these things in the years ahead.”

Obongo also expressed lofty hopes for the development of health, education, oil exports and agriculture — declaring a goal for South Sudan to be the “breadbasket of the region in years to come.”

However, the challenges are clear. Near-constant civil war in Sudan left the South with near-nonexistent infrastructure and scarce resources for development of one of the world’s most destitute nations.

“South Sudan is literally being built from scratch,” Obongo admitted. “No roads, no schools no, health. Nothing.”

Despite the herculean struggles, South Sudan has made some progress, including, Obongo noted, a 65 percent enrollment rate of South Sudanese children in school.

The contested land rights in the oil-rich region of Abyei remain unresolved. South Sudan also raised eyebrows when it decided to halt oil exports via a trans-Sudan pipeline earlier this year, also cutting off much of its own much-needed revenue (oil accounts for about 98 percent of government coffers). Despite a recent flurry of international mediation, Juba and Khartoum are still far apart on setting transit fees between north and south, with Sudanese government demanding $36 per barrel of crude oil. Obongo said Juba would be open for negotiations to lower the price to an international precedent. 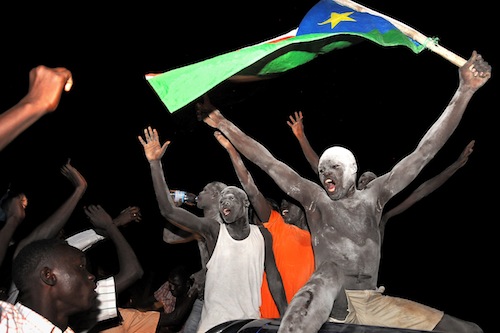 He added that while South Sudan remains willing to negotiate with Sudan, the government has been in talks with a South African company to build a new pipeline to the east. Obongo described a goal to have the pipeline in place to Lamu, Kenya — a distance of about 1,500 kilometers from South Sudan — in 30 months, though critics doubt the feasibility of such a plan for a cash-strapped state.

Lyman diplomatically called the plan “very optimistic,” given the logistics of financing, planning and environmental protection, among other issues.

He called on the government to develop the country’s domestic industries and businesses, noting that many corporations in the South are owned by Ugandans, Kenyans and other nationalities, and that it is vital for South Sudan to develop indigenous business ownership.

In an agricultural-based society, he added, development of the economy has to begin with small, localized agricultural units.

Obongo echoed a similar sentiment — that the South Sudanese Diaspora is needed to build the new nation. He urged those South Sudanese “who have found opportunity in the lands of opportunity” to return home, as the state is in need of medical practitioners, teachers, engineers and other skilled professionals.

On a personal note, he said he’s even been trying to convince his own daughter, a nurse in Australia, to consider returning home.

While addressing criticisms over media freedom, gender equality and the continued closure of Juba University, Obongo cautioned that South Sudan is “a learning nation,” calling for patience from his fellow countrymen and the international community alike, drawing on the old saying that “Rome was not built overnight.”

On gender equality, Obongo admitted that South Sudanese society was not the most inclusive.

“We are a patriarchal society,” he said. “That is the reality. But we are learning.”

He pointed out, for example, that constitutionally 25 percent of all levels of government are to be occupied by women. “We don’t see [the women], but they are there,” he said. “And they will emerge soon, very strongly.”

He also emphasized the need for further diplomatic support for South Sudan and pressure on Khartoum by international actors such as China and Russia, in particular urging nations to condemn Sudan’s aerial bombing campaigns in the Nuba Mountains and other areas.

Lyman was quick to interject that the United States condemned the bombings on several occasions.

But the almost-two-hour discussion ended, perhaps not surprisingly, on a positive note, also on the topic of aviation. Both Lyman and Temin quipped that they should definitely receive back pay of frequent flyer miles on the hypothetical South Sudan Air. In return, Obongo rebutted that he will make sure both will be able to fly directly to Juba not only from Europe, but also from Washington in the years to come.

Ryan Schuessler is an intern at The Washington Diplomat. He is a student at the University of Missouri.