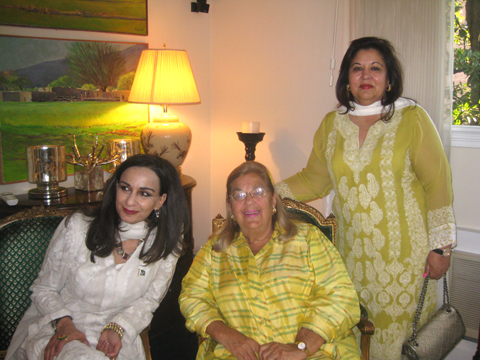 U.S.-Pakistani relations remain in a deep freeze. But that didn’t stop high-ranking U.S. officials from taking advantage of the warm weather (before the record heat set in) for an outdoor barbeque at the Pakistani ambassador’s residence on June 26.

The annual tradition was hosted for the first time this year by Ambassador Sherry Rehman, and despite the dismal state of bilateral ties, the tandoori-style summer garden party still drew members of Congress and the administration — a glimmer of hope that officials haven’t given up on salvaging this deeply problematic but hugely consequential relationship.

“Events such as this help break some of the ice that builds up in a challenging time,” said Rehman, “and tonight I honestly hope that the new light I see at the end of this tunnel is not a moment we fail to seize.”

About a week later, a small light did appear at the end of the tunnel. Pakistan announced it would reopen critical NATO supply routes that were shut down after the Obama administration refused to formally apologize for a November military strike along the Afghan-Pakistani border that accidentally killed 24 Pakistani soldiers.

But the seven-month stalemate was broken after Secretary of State Hillary Clinton said the U.S. was “sorry for the losses suffered by the Pakistani military.” The “sorry” seemed to be the magic word, with Islamabad promptly declaring that it would reopen the supply lines — also dropping its insistence on charging a transit fee for NATO trucks.

“This is a tangible demonstration of Pakistan’s support for a secure, peaceful and prosperous Afghanistan and our shared objectives in the region,” Clinton said in a statement. “This will also help the United States and ISAF conduct the planned drawdown at a much lower cost.”

In an official statement, Rehman said, “We are playing our role as responsible global partner in stabilizing the region. We appreciate Secretary Clinton’s statement, and hope that bilateral ties can move to a better place from here. I am confident that both countries can agree on many critical issues, especially on bringing peace to the region.”

Clinton didn’t make it to Rehman’s barbeque, but plenty of U.S. government officials did. Among those who stopped by were Transportation Secretary Ray LaHood, Sen. Dianne Feinstein (D-Calif.), chairwoman of the Senate Intelligence Committee, as well as Reps. Ed Royce, Jack Kingston, Jackie Speier and Sheila Jackson-Lee, co-chair of the Pakistani caucus.

Also in attendance: USAID Administrator Rajiv Shah, who’s been with working with Rehman on health care initiatives for Pakistan; Undersecretary of State for Public Diplomacy Tara Sonenshine, who’s engaged with Pakistani and American media in a series of joint outreach seminars with the ambassador over the last few weeks in Washington; and National Security Advisor Tom Donilon, who was spotted chatting with Rehman during the festivities.

There’s certainly plenty to talk about despite the recent reopening of NATO supply routes. American drone strikes against terrorist targets inside the country’s lawless border regions continue, enraging Pakistanis. A recent Pew Research Center poll found that roughly three in four Pakistanis view the United States as an enemy. Meanwhile, many Americans are increasingly calling for the U.S. to extricate itself (and its financial assistance) from what critics say is a perpetually dysfunctional and duplicitous “ally.”

Domestically, the nuclear-armed nation has been embroiled in its own political travails. Pakistani Prime Minister Yousaf Raza Gilani was booted out of office by Chief Justice Iftikhar Muhammad Chaudhry, who ordered Gilani’s dismissal because he refused to pursue a corruption inquiry against President Asif Ali Zardari. Critics though called the unprecedented intervention a “soft coup” by an increasingly activist judiciary.

Chaudhry, once a highly respected judge, has been mired in his own scandal, with Chaudhry’s son and his wife accused of taking millions in kickbacks from a powerful property mogul.

Interestingly, just hours before those revelations surfaced, Chaudhry presided over another high-profile scandal that inadvertently thrust Sherry Rehman to the ambassadorship in Washington.

A judicial commission found that Rehman’s predecessor, Husain Haqqani, did orchestrate a controversial memo sent to U.S. officials last year asking them to support the civilian government by reining in Pakistan’s all-powerful military.

Haqqani resigned after Pakistani-American businessman Mansoor Ijaz revealed the existence of the memo, which asked Washington for help preventing a military coup in exchange for a raft of pro-American security policies (also see “Diplomatic Shakeup at Pakistani Embassy” in the December 2011 Diplomatic Pouch and “Pakistani Tempest” in the January 2011 Pouch).

Haqqani could face treason charges and a possible death sentence if he returns to Pakistan, a scenario most see as highly unlikely. For now, he’s returned to Boston University, where he previously taught, occasionally making the rounds in D.C. — he recently participated in a discussion on “When Iran Gets the Bomb” at the Hudson Institute.

He also continues to deny involvement in the convoluted affair and says the commission’s report was politically motivated. “My real ‘crime’ is standing up for U.S.-Pakistan relations for Pakistan’s sake. I had nothing to do with writing and sending that memo,” he wrote in a June 13 op-ed in the Washington Post.

“I am saddened but not surprised that a Pakistani judicial inquiry commission has accused me of being disloyal while serving as my country’s ambassador to the United States. The tide of anti-Americanism has been rising in Pakistan for almost a decade,” he added. “This is a difficult time to openly advocate friendly relations between the United States and Pakistan.”

That difficult task now falls to Rehman, a former journalist and lawmaker who stood up for women’s rights and media freedom back home, even confronting death threats from Muslim extremists for supporting a repeal of the country’s hard-line blasphemy laws.

Rehman, dressed in an elegant traditional white dress at the summer barbeque, admitted that serving as Pakistani’s envoy in Washington was “challenging,” but said she’s determined to connect with as many U.S. officials as possible in a bid to repair relations.

“The idea is that if one door closes we open another, on both sides, to create a corridor of opportunities that can be explored,” she said. “We had some good conversations here with key people in the administration, as well as legislators, and I think we have critical follow up to do this whole week on ideas and suggestions floated.”

Anna Gawel is managing editor for The Washington Diplomat and a columnist for the Diplomatic Pouch.