Home The Washington Diplomat May 2015 Pouillon Recalls Going Organic, Before Everyone Else Did 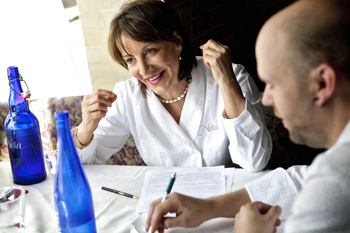 Nora Pouillon, the brainchild behind Restaurant Nora, talks about her quest to offer Washingtonians healthier eating choices in her new memoir, “My Organic Life: How a Pioneering Chef Helped Shape the Way We Eat Today.”

“She told me don’t say the word ‘organic’ — it sounds like a biology class,” Pouillon recalled with a smile during an April 8 press luncheon for her lively new memoir “My Organic Life: How a Pioneering Chef Helped Shape the Way We Eat Today.”

Of course, today “organic” is widely considered the gold standard in dining and nutrition — so much so that the term has almost become passé. The food trend has become a multibillion-dollar international business and something of an obsession among particularly health-conscious, educated consumers. Pouillon, who grew up in the Austrian Alps and later moved to Vienna before landing in Washington as a young chef, is now among the nation’s most celebrated and respected purveyors of organic food. In addition to being a local dining destination, Pouillon’s restaurant was the nation’s first certified organic restaurant, meaning that at least 95 percent of all ingredients used are produced by certified organic farmers, growers and suppliers.

Over a delicious and — naturally — organic lunch of fresh Hawaiian greens with hearts of palm, sake-glazed black cod and Austrian chocolate almond cake, Pouillon explained her restaurant’s mission and the intent of her book.

“The idea of the book is to inspire people to live in a more healthy and sustainable way,” she said. 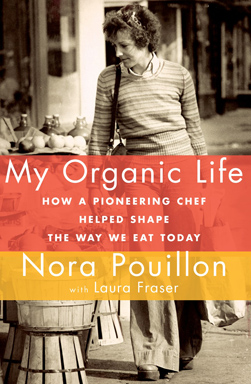 The mother of three grown children has devoted her life to spreading the gospel of healthy, nutritious food that is free of the pesticides and chemicals that plague so much of what we find in American grocery stores and restaurants.

“Eating in a healthy way means you can eat whatever you want,” she said. “You just have to use wholesome, nutritious ingredients — and that usually means organic.”

If Pouillon weren’t so warm and approachable, her warnings about hormone-infused meats and pesticide-laden fruits and vegetables could come across as scolding. When a reporter asks Pouillon what she tells people who insist that eating healthy, and especially organic, is too expensive or even “elitist,” she becomes animated. This is clearly a subject she has considered at length.

“Do you want to spend your money on healthy food or doctor’s visits?” she responded with a wry arch of her eyebrows. “You have to take responsibility for your health.”

But Pouillon also concedes that organic foods can be hard to find in the United States, where so much is grown and processed by sprawling food conglomerates.

“There is not enough available — too few do it,” she said of the move toward organic farming.

Pouillon also encourages us to push our grocers for better-quality options. “As a consumer you have enormous power. You just have to ask for it,” she said.

If organic foods are tough to find today, they were virtually nonexistent when Pouillon came to town in the late 1960s. Long before farmers markets came into vogue and the words “sustainable” and “locally sourced” became de rigueur menu descriptions, Pouillon was shocked to discover the Wonder Bread-quality lineup of processed foods that filled America’s grocery stores.

She began to teach cooking classes and eventually became a chef at the Tabard Inn. After she and her husband split up, Pouillon opened Restaurant Nora, tapping the extensive network of organic farming contacts she had made in Virginia, West Virginia and Pennsylvania.

Pouillon’s book is a frank and entertaining look at the celebrity chef’s personal life, from her picturesque upbringing in the Austrian Alps and then Vienna to her three-year dependence on amphetamines as a teenager to her relationships, including his-and-hers extramarital affairs during her first marriage. It’s also an interesting snapshot of D.C. and its accomplished and intelligent personalities, many of whom Pouillon calls friends.

You can sense her immense pride in a retelling of the night President Obama and the first lady dined at her restaurant. 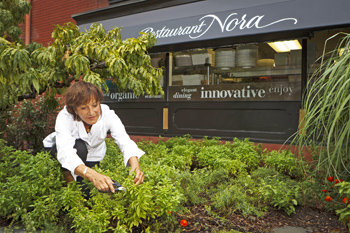 “I’ve spent most of my life in Washington, and I could never have dreamed that we’d have a president and, especially, a first lady who are so committed to promoting healthy foods,” she writes. “It made me realize how far we have come since the days when I felt as if buying organic meat were some kind of crime.”

And the book, of course, is an ode to her love affair with good food. As noted on the cover jacket, “My Organic Life” is as much the story of America’s postwar culinary history as it is memoir. Pouillon engagingly traces the birth of the farm-to-table movement, the proliferation of farmers markets across the country and the evolution of the chef into social advocate.

She says she hopes to prod those of us who read the book to be more conscious of the culinary and dietary decisions we make. She said her restaurant aims to provide patrons with a satisfying meal, but not an overly indulgent one.

“When people come here and they leave they feel good; they don’t feel too heavy,” she said. “They know the food is pure and without additives.”

But she conceded they could suffer a headache the next morning.

“They might drink too much wine because I do have good wine,” Pouillon said with a wry smile.

In conjunction with the release of Pouillon’s book, Environmental Working Group Executive Director Heather White announced her organization’s new “Food Scores: Rate Your Plate,” an online database and mobile app that helps shoppers find healthier, cleaner and greener food. You can find more information about the program at www.ewg.org/foodscores.