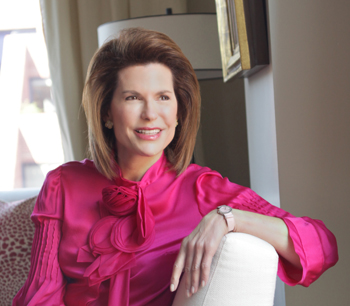 Nancy G. Brinker – former U.S. chief of protocol and ambassador to Hungary – has returned to civilian life, but she’s still very much a diplomat.

In her new post as president and chief executive officer of Susan G. Komen for the Cure – an organization she founded in 1982 to honor her sister – Brinker aims to continue expanding the group’s already global reach. The powerhouse nonprofit, which has invested more than a billion to stamp out breast cancer while educating millions about the disease, has for the second year added the word “global” to its annual Race for the Cure in Washington. (This year’s event on the National Mall – expected to draw 45,000 participants – is June 5.)

The term “global” isn’t just a word the Komen organization added to the race to give it more flair. Brinker is working overtime to enlist foreign diplomats stationed in the United States to play an active role in the event – and in the larger mission of eradicating breast cancer.

“I believe in the diplomats,” Brinker said during a wide-ranging interview on a sunny spring morning in her elegant, airy residence in Georgetown. “Members [of the diplomatic corps] who have posted to Washington as foreign ambassadors are prominent people in their own countries.”

Recruiting international diplomats and their friends to participate in Washington’s Global Race for the Cure helps validate the “global” aspect of the event’s moniker, but also makes for good strategy, Brinker explained.

“They are leaders, so to engage them in an effort like this is key,” she said. “It creates a bond of diplomacy that might not happen through traditional channels. To ask them to bring a race team means that someone in their country – or a lot of someones – will be educated, because this will end up on a Web site, or it will be something they talk about.”

And simply talking about breast cancer, especially in lower-income developing countries, is at least half the battle. For nearly three decades now, the Susan G. Komen Breast Cancer Foundation has been working to remove a stubborn stigma associated with the disease. That effort has largely succeeded in the United States, where nearly 40 million women receive routine mammograms each year.

But other countries have a long, long way to go.

“It’s the same stigma that used to be here in the United States 30 years ago, but with fewer resources to deal with it,” Brinker lamented. “In many of these countries if you’re diagnosed with a disease like breast cancer you are thought to be contagious. In some countries, your family can be really disadvantaged. A man can leave his wife, or have her killed, her relatives killed, or her dowry taken away. It’s very serious as you go down the economic ladder.”

Some of the poorest countries don’t even acknowledge any form of cancer as a disease.

“In many low-resource countries, there aren’t even any cancer registries,” Brinker said. “The word cancer is unspoken – and it’s the leading killer now of people for most of this decade.”

In fact, nearly 200,000 people in the United States are diagnosed with breast cancer each year, with more than 40,000 dying from the disease. Worldwide the figure is roughly 1.3 million new cases diagnosed in 2007 (most recent data available), and 465,000 deaths. This means that every 68 seconds, a woman dies of breast cancer somewhere on the planet.

In addition to her work as CEO of Susan G. Komen for the Cure, Brinker also serves as a goodwill ambassador for cancer control for the World Health Organization. 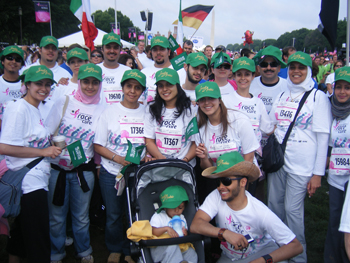 Saudi Arabia was one of more than 40 embassies from Washington that fielded a team at last year’s Susan G. Komen Race for the Cure, which officially became known as the Global Race for the Cure to reflect the breast cancer organization’s global reach.

“One of my key goals is making people aware that this disease exists,” she told The Washington Diplomat. “Cancer as a whole is likely to kill as many as 20 million people by 2030. It’s going to be cataclysmic. It’s going to be a tsunami. That’s why we’re trying to educate people and say, ‘Deal with this now; invest in education and innovation in your country.'”

Brinker’s intensity and obvious passion for her job stems from a promise she made to her sister, Susan G. Komen, who died a painful death from breast cancer in 1980 at the young age of 36. Brinker’s promise was that she would help put an end to the shame, pain, fear and hopelessness caused by the scourge. She tells her story in a new memoir titled “Promise Me: How a Sister’s Love Launched the Global Movement to End Breast Cancer.”

Her big sister Suzy’s presence at Komen is not just on the organization’s letterhead, Brinker added. “I’m a very religious, spiritual person and I cannot help but see her hand in this in so many ways,” Brinker explained. “Just when things seem as if they are going to crash they turn around. This is her life’s wish – this is what she wanted her life to be about. And I committed I would do this for the rest of my life – and it has taken the rest of my life. I just didn’t realize that it would. It’s been an amazing journey and we’re certainly not finished yet.”

In fact, Brinker said the global battle to eradicate breast cancer is only at about the halfway mark. But the progress is undeniable. Today, for instance, nearly 75 percent of women over the age of 40 receive regular mammograms, whereas in 1982, less than 30 percent received a clinical exam. Likewise, the five-year survival rate for breast cancer, when caught early before it spreads beyond the breast, is now 98 percent, compared to 74 percent in 1982.

Komen has been instrumental in helping to turn those numbers around, making millions of women more aware of the dangers of breast cancer and saving countless lives through mammograms and early intervention. The organization now has offices in 125 U.S. cities and 50 countries around the globe.

“We are the largest nonprofit source of research funds other than the U.S. government,” Brinker said. “We’ve granted in research, education and outreach well over class=”import-text”>2010June-Nancy Brinker.txt.5 billion. We’ve transformed and built careers of breast cancer scientists that didn’t exist before. We’ve funded many of them for years and years and years.”

But there is much more work to be done. To that end, Komen’s goal is to invest an additional class=”import-text”>2010June-Nancy Brinker.txt billion over the next decade.

“Now we’re funding translational research – translating what we know into real, effective treatments and hopefully prevention of disease,” Brinker explained. “We know you can’t eradicate or deal with a disease like breast cancer unless you deal with all of the issues from prevention to end-of-life issues in every culture – heavily funding research, outreach and translation of treatment. It doesn’t help to treat a hundred people with the best science has to offer. You have to translate it to an entire population.”

An organization such as Susan G. Komen for the Cure, with vast financial resources, fields scores of requests for funding. But when it comes to research, the best ideas and the best science almost always get the nod, Brinker said. A 50-member scientific advisory committee helps sift through proposals and make decisions. To date, Komen has invested 0 million in life-saving research that has touched every major advance in breast cancer treatment and care.

“You take bets on the best information you have,” Brinker said. “We like to do things that are innovative. We don’t just fund things that NIH [the National Institutes of Health] is funding. We like to fund things even before that. Or we like to go in a direction that they’d never be able to go because it’s a little out of the box.”

For example, this year Komen spent million on prevention research by funding a tissue bank for asymptomatic women, or women with perfectly normal breast tissue. Hopefully, the research will help scientists and doctors learn more about how breast cancer develops from healthy tissue.

“We are going to be able to do some really innovative things, and I think we will lead in a way that no other cancer organization currently can,” Brinker predicts. “I’m really exited about what we are able to do and if the economy improves, then we’ll be able to do even more.”

While Brinker can talk cancer science with the best doctors on the planet, she revels in spreading the gospel of breast cancer awareness to the layman. It’s a role she continued as ambassador to Hungary and later as chief of protocol during the Bush administration (also see “Breast Cancer Crusader Chosen as Next U.S. Chief of Protocol” in the November 2007 issue of The Washington Diplomat). Brinker said she was careful not to cheerlead too much for Susan G. Komen for the Cure while traveling the world as the diplomatic face of the White House, but she did make time to speak out on the subject during her personal time.

“When I would travel, I would go and visit clinics and people,” she recalled. “People would come to see me in the Middle East and Saudi Arabia. I was more well known for doing the breast cancer work than I was for being chief of protocol. That’s why I loved that job – it allowed me to do more things.”

Her friend, former first lady Laura Bush, gave a very public nod to Brinker and the work of Susan G. Komen in October 2008, when she illuminated the White House in soft pink light to heighten breast cancer awareness. Egypt also lit its famed Giza pyramids pink during a Race for the Cure organized there by Brinker and the Egyptian government. The mayor of Jerusalem has promised to illuminate the streets of his city pink as well, during a Susan G. Komen research conference and race there later this year.

Brinker said she’ll never forget the feeling she got when she saw America’s most famous residence – the White House – bathed in pink. “It was such a moving moment,” she said, adding that Laura Bush is “such a good friend and was so good to do that.”