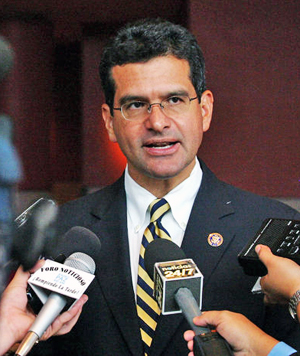 Puerto Rico isn’t a country, so it doesn’t have an embassy in Washington. And it’s not a state either, so it can’t send to Congress the eight lawmakers — two senators and six representatives — its population of 3.7 million would warrant under statehood.

What it does have on Capitol Hill is Democratic Rep. Pedro R. Pierluisi, the island’s non-voting resident commissioner. And Pierluisi isn’t too happy at the moment.

He claims that the U.S. Virgin Islands — Puerto Rico’s much smaller neighbor to the east — is using federal subsidies to fuel its growing rum industry at the expense of Puerto Rico and other Caribbean islands (see main story).

Funny, because that’s exactly what Caribbean diplomats are accusing Puerto Rico of doing, too.

The complicated debacle has put Puerto Rico, a U.S. commonwealth since 1952, in the ironic position of having to urge Congress to limit the amount of rum excise-tax rebates U.S. territories such as itself may earmark toward luring giant rum distilleries to their jurisdictions. The rebates are a financial windfall for Puerto Rico, bringing in more than $449 million in fiscal 2011. Pierluisi believes the rebates — which subsidize rum production — distort fair competition and are needlessly excessive. He also says too much of this money gets directed back to rum distillers instead of being used for economic development.

In an interview with The Washington Diplomat, Pierluisi said that since taking office in 2009, he’s introduced two bills — one in the 111th Congress and one in the 112th — attempting to curb the practice. The first bill called for a 10 percent cap on the amount of “cover-over incentives” either Puerto Rico or the USVI could offer rum producers. When the bill went nowhere, Pierluisi reintroduced the legislation, this time with a 15 percent cap. But that second bill failed to gain traction as well.

“My longstanding position on this issue has been that rum producers should be competing among themselves based on the quality of their products and the prices they sell them at — not the amount of incentives or subsidies they get from territorial governments,” Pierluisi told us.

“Unless Congress imposes some caps here, Puerto Rico would have to offer similar incentives, and that’s what has ended up happening,” he said. “Unfortunately, the attitude in Congress at the leadership level is, let the territorial governments agree with each other and let’s not get involved.”

It’s not that Pierluisi completely disagrees with the rebates. “If the cover-funds were 5 or 6 percent, there would be no issue. All governments give incentives to promote industry. But these incentives are excessive,” said the congressman, noting that the USVI is now using 47 percent of these “cover-over” funds to offset the cost of constructing a $165 million distillery on the island of St. Croix.

In effect, he argues, this amounts to a massive tax break for Diageo, the British drinks conglomerate that recently shifted production of Captain Morgan Spiced Rum to that St. Croix distillery. Previously, the premium rum brand was produced by Destillería Serrallés in the southern Puerto Rican city of Ponce.

The USVI has also entered into a similar deal with Fortune Brands, which produces Cruzan Rum in St. Croix.

In response, Pierluisi said, “Puerto Rico ended up enacting a law allowing the local government to give exemptions at the rate of 47 percent of cover-over funds to local producers Bacardi and Serrallés. So now, both territories [Puerto Rico and the USVI] are using close to half of these funds to incentivize their respective rum industries. That’s not an ideal situation. It’s un-American. It’s not the way we run businesses in America.”

Pierluisi says he’s been working closely with two Democratic senators — Robert Menendez of New Jersey and New Mexico’s Jeff Bingaman, who just left the Senate — to impose reasonable limits on the amount of cover-over funding that can be used by each territorial government to subsidize its rum producers, but that “this effort has been resisted by Diageo and by the USVI.”

Pierluisi said he’s tried to reason with Virgin Islands Gov. John de Jongh and the territory’s non-voting delegate in Congress, Donna Christensen, “but from day one, their position was this deal was cut in stone. The USVI was committed to defending the deal and not doing away with incentives they promised Diageo.”

In a recent letter to constituents, Christensen called the accusations against her territorial government “baseless” and denied that Caribbean rum exporters are suffering as a result of the Diageo or Cruzan Rum deals.

In fact, she said, imports of rum into the United States from the Caribbean are up year on year. According to U.S. International Trade Commission data, rum imported to the U.S. market from Caricom (Caribbean Community) member states and the Dominican Republic actually increased over the past year by 12.8 percent in value and 17.5 percent in volume from 2011 figures. 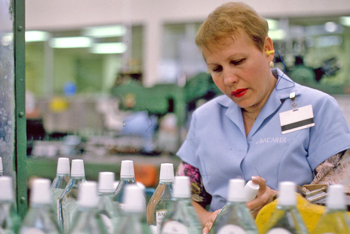 The Bacardi rum distillery in Cataño, Puerto Rico, established in 1936, is the largest of its kind in the world.

“Moreover, Caribbean producers enjoy many protections from their own governments in the form of tariffs and taxes that are inconsistent with their own WTO [World Trade Organization] obligations,” said Christensen. “Many of the Caribbean rum producers are owned by multinationals similar to those with which the USVI has partnered. Some commentators like to portray this issue as David versus Goliath, but I can tell you that David in this story is the USVI, fighting to grow its own rum industry and keep its economy afloat.”

She pointed out that the Virgin Islands, home to only 110,000 people, was hit hard by the recent closure of the Hovensa oil refinery, which had employed thousands of locals. “This devastating development increased unemployment, decreased tax revenues and caused thousands of citizens to move off the island of St. Croix. As a result, the rum cover-over revenue is providing hope and stability in a time of dire economic need.”

Christensen further warned that efforts by the 15-member Caricom to seek legal action through the WTO “would succeed in causing unnecessary friction and animosity.”

In contrast, Pierluisi said he completely understands the position that Caricom finds itself in.

“Ever since the 1980s, we’ve had a law imposing a 10 percent cap. The purpose of this law was to ensure that the government of Puerto Rico would use the funding for meeting its fiscal obligations in a wide range of areas — economic development, social well being, education and conservation of natural resources,” he said.

“If we don’t regulate the use of these cover-over funds, this will become a race to the bottom. Puerto Rico will have no choice but to match the incentives the USVI is giving. Otherwise, producers could end up leaving our territory just to get a better deal.”