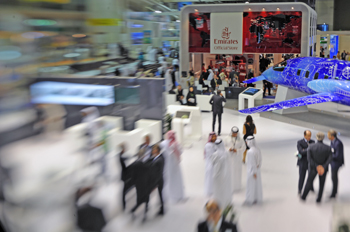 But here’s one superlative you might not know: this South Carolina-size desert nation with only 7.8 million inhabitants is also America’s biggest export market in the Middle East.

Danny E. Sebright, president of the U.S.-U.A.E. Business Council, is proud of that fact. He said that in 2011, bilateral trade came to just over $18.3 billion, making it a better customer for U.S. goods than oil-rich Saudi Arabia, staunch ally Israel or vastly larger Turkey, which has 10 times the UAE’s population. And trade figures for 2012 are expected to be even higher.

Part of this is explained by the country’s extravagant prosperity. Despite the global economic meltdown that shook Dubai’s overheated real estate market in late 2009 and forced it to borrow $10 billion from fellow emirate Abu Dhabi, the country still managed to make sixth place in the latest Forbes ranking of the world’s wealthiest nations, with annual per-capita income of nearly $47,500.

But that alone doesn’t explain everything. Nearby Qatar has a per-capita income of some $88,000, yet that country’s total trade with the United States in 2011 amounted to only $4 billion.

“The United Arab Emirates is the hub between East and West, so not everything we export stays in the UAE,” Sebright explained. “Many products are repackaged or reshipped, or assembled with pieces made into a whole system and re-exported throughout the region.”

The UAE consists of seven emirates, with Abu Dhabi accounting for 85 percent of the country’s land area and 90 percent of its oil and gas reserves. Dubai, by contrast, has little oil, so early on it diversified into shipping, trade, tourism and banking. Its free-market capitalism, combined with some of the world’s most liberal tax, investment and residency laws, have lured tens of thousands of Americans to move there. (The other five emirates — Ajman, Fujairah, Ras al-Khaimah, Sharjah and Umm al-Quwain — are economically insignificant compared to Abu Dhabi and Dubai.)

In addition, the United States imported $2.4 billion from the UAE, primarily steel, aluminum, other raw materials and some petrochemical products. Yet even though the UAE boasts the world’s seventh-largest reserves of both petroleum and gas — the source of much of its wealth — the United States does not import a drop of its oil.

Correcting such common misconceptions is one reason the Washington-based U.S.-U.A.E. Business Council came into being.

“The council was formed in 2007 after the Dubai Ports World crisis, with the key purpose of being a platform to provide timely, accurate information so that something like that could not happen again,” Sebright told The Washington Diplomat.

He was referring to a bilateral crisis that erupted the year before, when DP World bought British shipping giant P&O. As part of that sale, DP World was to assume the leases of P&O to manage major U.S. port facilities in New York, New Jersey, Philadelphia, Baltimore, New Orleans and Miami, as well as operations in 16 other ports.

However, once the transaction became a matter of public record, many Democrats in Congress — along with a few powerful Republicans — questioned the deal on the grounds that it could make the United States more vulnerable to terrorism. In February 2006, then-President Bush threatened to veto any legislation passed on Capitol Hill to block the deal, a veto that would have been his first.

In the end, Bush never had to wield his veto threat. DP World eventually backed off from its plan, transferring operations to an unspecified American entity.

“We have one primary mission and one secondary mission: to be a platform that provides opportunities for government officials, corporate executives, NGOs and others involved in various aspects of the relationship to discuss matters of mutual concern, advocate on behalf of that relationship, and dispel falsehoods and innuendoes,” said Sebright. “Our secondary mission is to help companies [in both countries] broaden our business, create partnerships and make them aware of business opportunities.”

The council, which began with 30 companies, now has 125 members on its roster. Prominent U.S. corporations that belong include Boeing, Occidental Petroleum, ConocoPhillips, General Electric, ExxonMobil and Raytheon.

Membership is available at three levels — founding ($50,000 a year), corporate ($25,000) and associate ($5,000) — and members must be headquartered either in the United States or the United Arab Emirates.

In addition to its business contacts, the council apparently enjoys some clout on Capitol Hill.

In December 2009, the UAE and the United States signed a landmark accord on peaceful nuclear cooperation. The deal, known as the “123 agreement” establishes a legal framework for Washington to transfer sensitive information and materials, like nuclear fuel, to the Emirates — in return for a promise to abide by nonproliferation agreements and forgo domestic production of sensitive elements of the nuclear fuel cycle such as spent fuel plutonium reprocessing. Yet unlike America’s other “123 agreements” with various allies, this one gives the United States the right to stop nuclear cooperation and require the return of materials or technology if the UAE changes its mind.

Emirati officials say the country needs nuclear power to keep up with rising energy demands, though critics have cited the UAE’s proximity to Iran, whose nuclear ambitions have worried Israel and other U.S. allies in the region. Supporters of the deal though say it’s a clear rebuke to Iran’s covert nuclear program, strengthening the worldwide nonproliferation regime and codifying unprecedented steps the UAE is taking to prevent proliferation.

The business council organized briefings on the issue with congressional aides to get that point across. Among its corporate members are Akin Gump and DLA Piper, which together were paid $1.6 million to lobby hard for the nuclear deal. A third K Street lobbying firm on the council, Patton Boggs, doesn’t represent the UAE government but maintains offices in Abu Dhabi.

“Initially we were worried there might be opposition in Congress to the nuclear issue. So the business council and the U.S. and UAE governments all teamed up to inform Congress what was happening, what was really being approved, and what it means from the nonproliferation standpoint,” Sebright recalled. “The deal went through at the end of 2009 without a whimper from Congress. Widespread opposition never occurred.”

Sebright, who’s headed the council since 2008, is a native of East Berlin, Pa. He studied international affairs at the George Washington University and public administration at Harvard University’s John F. Kennedy School of Government. He then spent 10 years with the Defense Intelligence Agency. He also worked in various positions at the Defense Department, including director of the policy executive secretariat for the global war on terrorism from 2001 to 2002, during which time he participated in oversight of Operation Enduring Freedom in Afghanistan and Operation Noble Eagle, the defense of the U.S. homeland.

Among other things, he served at the U.S. Embassy in Tel Aviv during the 1991 Gulf War, and he’s a part-time consultant to the Washington-based Cohen Group, founded by former Defense Secretary William Cohen. Sebright speaks conversational French and basic German, Russian, Chinese and Hebrew.

Sebright said that for every $1 billion increase in exports, some 5,000 to 10,000 U.S. jobs are created. So if total U.S. exports to the United Arab Emirates come to $16 billion, that translates into some 80,000 to 160,000 new jobs here at home. In the case of the UAE, those jobs are going mainly to places like Dallas-Fort Worth, Seattle, Boston and the Washington, D.C., area.

In addition, UAE companies are investing directly in the United States.

Abu Dhabi-based Globalfoundries expects to create 6,400 jobs when its $6 billion microchip factory opens in upstate New York. The plant is being built in partnership with Advanced Micro Systems, the world’s second-largest chipmaker.

In addition, UAE-based firms are investing heavily in hotels and real estate ventures around the country because the United States is seen as an attractive investment in times of trouble.

“Dubai was overextended, but it’s also plugged into the global economy in a way that no other economy in the Middle East is,” Sebright said. “Even Qatar isn’t nearly as exposed as Dubai was three years ago.”

Sebright said the UAE economy is likely to grow 3 to 4 percent next year, and that 80 percent of the country’s big construction projects are largely back on track after the 2008 worldwide economic crisis.

“The global downturn caused them to review all megaprojects, and the ones that made sense continued. It was as a result of a very stringent and disciplined review process,” he said. 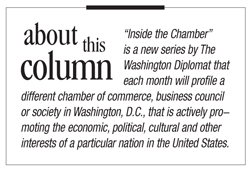 One issue that has received widespread condemnation is the UAE’s dismal record when it comes to the treatment of construction workers and housemaids from India, Nepal, Bangladesh and the Philippines. Laborers are routinely forced to live in substandard conditions and their employers often confiscate their passports to prevent them from leaving, even though the practice is illegal.

Things are so bad that in an interview with The Diplomat nearly three years ago, the country’s ambassador in Washington, Yousef Al Otaiba, called it “absolutely horrendous and bordering on inhumane.”

Sebright agrees, though he insists the labor situation is improving.

“A number of our members, such as New York University and the Cleveland Clinic, are building new facilities in the UAE, and they want to make sure the construction companies they hire to build those facilities treat their workers according to the highest international standards,” he said.

“I’m not going to deny that there haven’t been some problems in the past, but the UAE government has taken a very firm stand on establishing guidelines that companies must adhere to,” Sebring told us. “They’ve been out patrolling and inspecting facilities and foreign workers’ living quarters. I know they take this very seriously. With the amount of activity going on over the last three or four years, obviously the task may have been a little bigger than they were geared up to handle, but they’re doing their best.”