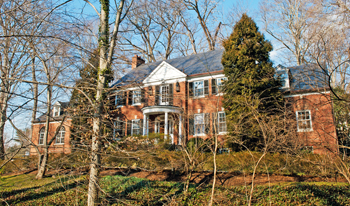 Redesigning a house in six weeks is a challenge. Add to it that the house is more than 10,000 square feet and 23 of its rooms and spaces will each be remodeled by a different designer, and it sounds like pure chaos. But it’s more like controlled madness, if you ask the decorators involved in the fifth annual DC Design House, which benefits Children’s National Medical Center.

“It’s a significant challenge, but it will be fun,” Lorna Gross, owner of Savant Interior Design in Bethesda, Md., said of the annual design showcase and fundraiser.

This year’s house is a seven-bedroom, seven-bathroom estate in Spring Valley that was built in 1956 for media magnates Francisco and Gladys Aguirre. Francisco Aguirre, a native of Nicaragua, was an international consultant and a co-founder of the Diario Las Americas newspaper, still run by the family in Miami. Well connected through their business to Latin American movers and shakers, the Aguirres entertained prominent political and business figures at their home, including heads of state from Argentina, Bolivia, Costa Rica, Nicaragua and Panama. Situated on a one-half-acre site, the home is still owned by the family through three trusts, and Gladys Aguirre, 90, lives in the District. Dubbed the Blue House for the family’s 40-year tradition of covering the exterior in blue lights during the winter holidays, the estate will go on the market for sale after the Design House event ends May 13.

Although mostly well maintained, the appointments that worked 56 years ago don’t translate so well today. Only the master bathroom and one other bathroom will go untouched, and some rooms will completely change in function. For example, Shazalynn Cavin-Winfrey of SCW Interiors in Alexandria, Va., is turning the living room, a few steps from the grand winding staircase at the entrance, into the formal dining room. 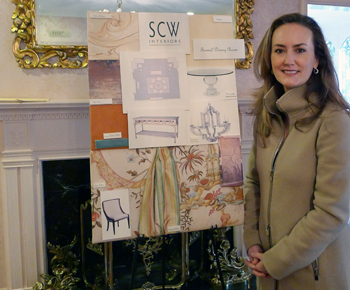 Shazalynn Cavin-Winfrey of SCW Interiors in Alexandria, Va., is turning a dated living room, a few steps from the grand winding staircase in the foyer, into a formal dining room.

Currently adorned with rose-pink shimmery patterned wallpaper and three painted portraits of Gladys and her parents on one wall, the only things Cavin-Winfrey will leave intact are four Roman columns and the ornate crown molding.

“This is actually a much better utilization because this is a much grander room and has access to the patio for entertaining, and it’s a little bit more removed from the kitchen noise,” said Cavin-Winfrey, who is participating in Design House for the second time. “If you are entertaining dignitaries, you want to have a space that is private and quiet.”

She plans to cover the ceiling with marbleized wallpaper and the walls with a coral-dominated wallpaper. Those changes will be permanent; the $60,000 dining room table, however, will be on loan from Jessup, Md.-based Spectrum Limited.

Veteran designer Kelley Proxmire of Kelley Interior Design in Bethesda is tackling the ballroom, which she is transforming into a l’orangerie, or French-inspired space infused with orange and palm trees. Her muses were a book on French country homes and pictures from Versailles.

“This space is awkward. When I walked into this space, I thought it needs help,” Proxmire said of the rectangular room that culminates in a curved alcove. With large windows and lots of natural light, her goal is to brighten it even further. “It will be colorful.”

She chose a new orange chinoiserie toile pattern by French fabric designer Manuel Canovas to serve as the table skirt and pillows on a white sofa. The walls are going to be white, and orange drapes will run the lengths of the high walls. A large rug will cover the honey-colored hardwood found throughout the home.

Two staircases on the main level lead to the second-floor bedrooms and a study, which Gross is taking on. A veritable log cabin inside the house, Gross says the study is the ultimate man cave.

Covered in knotty pine paneling from ceiling to floor, including built-in bookcases and a desk, the room screams monochromatic. “This room would work if it were in the mountains of Colorado,” Gross said. “In D.C., it just doesn’t work. It’s very dated now.” 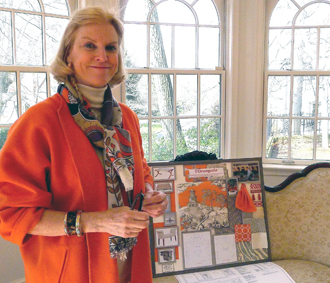 Kelley Proxmire of Kelley Interior Design in Bethesda stands by her design board, which details her plans to transform a ballroom into a l’orangerie, or a French-inspired space infused with orange and palm trees.

She’s taking out the bookcases and desk, painting the walls an off-white color and adding drapery. She’ll also put a new desk on the back wall of the room.

“I think in taking all of these bulky things out, the room will actually open up, but we still get the advantage of it being cozy because it’s one of the few small rooms in the house,” she said. “You kind of want to get away and have an intimate space, and this is one of the few spaces that you can do that.”

The main attraction on the second floor is the master suite, comprised of a sitting room, the bedroom, a deck and the master bath. The bedroom is Sharon Kleinman’s baby. Kleinman, owner of Transitions in Potomac, Md., is drawing inspiration from the great outdoors. She’s stripping the walls of their textured aqua wallpaper and taking advantage of the removal of bars on the sliding glass doors.

“This room architecturally doesn’t have much interest except for the window,” Kleinman said of the rectangular space. “My concept, since the view is pretty, is to pull the outside in with my color scheme. So I chose varying shades of green, warm earth tones and brown colors. To create a little drama in here, I’m painting the walls a deep brown color. That will be contrasted against the white mohair rug.

“I chose fabrics that are lush in feel,” added Kleinman, a Design House first-timer. “What I was trying to do was to create a room that’s kind of sensuous — lots of texture. It’s layers of texture, and it’s a very transitional room and eclectic.”

Kleinman is also incorporating pieces that make the room feel homey. “Instead of just plopping in all new furniture, most people have things that they loved or were handed down to them, so in the corner we’re using an antique lacquered wedding chest as if that were something that may have been handed down,” she said. 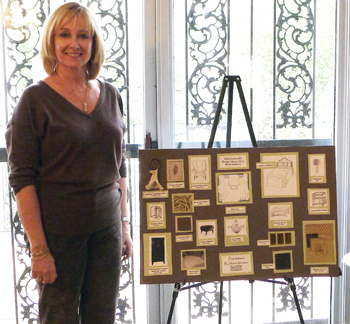 Sharon Kleinman, owner of Transitions in Potomac, Md., is drawing inspiration from the great outdoors to redesign a master bedroom.

She’s contrasting that with modern pieces such as an acrylic-based bench at the end of the bed. “As much as possible I’m trying to have reflective surfaces to bring the light in and give the room more warmth and interest,” Kleinman said.

Next door, Tricia Huntley of Huntley and Co. Interior Design in D.C. is also using contrast to update the master sitting room.

“I feel like sitting rooms are those places where you can do something a little magical,” Huntley said. “It’s such a luxury to have that kind of a room, so I had a little fun with it.”

The first-time Design House participant is leaving the built-in bookcases, crown molding and small fireplace alone while creating mid-century glamour using vintage furnishings to create the feel of a lounge. She’s pairing angular medal sconces above the fireplace with a curved sofa in one corner and a plush round ottoman in the middle. Chairs and a desk will take up the opposite side of the room near one of two windows.

Other room projects include an overhaul of the kitchen by Nadia Subaran of Aidan Design in Bethesda. She’ll take it from a dated navy-and-white space to a softer one dominated by grays and dark wood.

Skip and Debbie Singleton, principals of DC Living Real Estate, founded the nonprofit Design House in 2008 as a way for the metro area’s top designers to showcase their talent while raising money for Children’s National Medical Center. Last year, the event, at a home in Forest Hills, attracted 10,000 visitors and brought in $200,000 for the hospital. In all, it has raised nearly $600,000 for the center and attracted more than 30,000 people.

An all-volunteer group of 12 executive committee members works on the event year-round, including selecting the home and negotiating with the owners. They rely on suggestions of properties from area real estate agents, designers and the Child Health Center Board at Children’s. 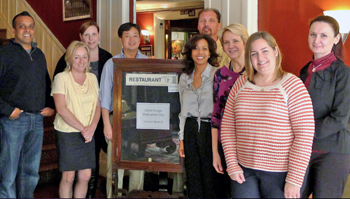 Nadia Subaran and her team from Aidan Design plan to revamp a navy-and-white kitchen into a softer space dominated by grays and dark wood.

“We’re already looking for the next one,” Singleton said.

For a house to qualify, it must be inside the Beltway and have enough rooms to accommodate 20-plus designers. Homeowners must vacate the property from March 1 to the end of May and allow the designers to make their changes. Owners do, however, get to approve structural and other permanent changes.

Most items are donated by vendors, such as more than $100,000 worth of paint and wallpaper from Farrow & Ball, a British wall-covering company. Designers, also working as volunteers, pay for some of the pieces out of their pockets. For example, they purchase draperies, which the homeowner — and the public — has the option of buying, with 20 percent of those sales going to the hospital.

“Nearly everything in the house is for sale,” Singleton said. “You can go through and pick out all the latest tables and chairs and sofas. It’s the coolest furniture store.”

About 120 designers toured the home on Jan. 16 and 17 during the Designer Walk-Throughs. Then about 80 of them submitted proposals for layouts, and 23 were chosen by Design House’s selection committee.

“It’s a process. We get far more submissions that we can select,” Singleton said. “We like to showcase the talents principally of D.C. metro area designers, but we also have Baltimore designers and folks from outside the immediate D.C. metro area.”

In addition to getting their names out, the event lets designers test their skills and get to know one another. “It’s fun, a really nice group of people,” Kleinman said.