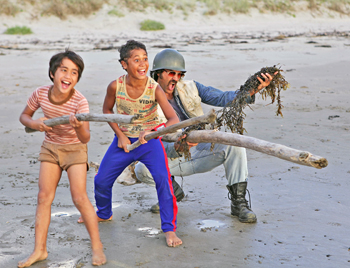 Also See:
‘Declaration of War’ and ‘Hipsters’ and Repertory Notes

The film’s immense popularity derives from its successful depiction, enhanced by vivid details, of the pre-teen hero’s charming perspective as an innocent lad who must inevitably come of age. The distinctive childhood vision is brought to life by larger-than life animations of still drawings, enhanced dream sequences and fantastic musical numbers derived from Michael Jackson videos from the peak of his reign as the King of Pop in the 1980s.

In 1984, in a countryside Maori town of along Zealand’s east coast, 11-year-old Boy (James Rolleston) suffers being a constant target of bullying. He lives in an impoverished home where Boy’s grandmother cares for him, along with his younger brother and a gaggle of young cousins. Yet his constant daydreaming — such as riding dolphins and dressing in tuxedos daily — provides him with an escapist outlet that helps him generate a reasonably positive attitude, all things considering. The lively teenager becomes fascinated with popular American culture, particularly Michael Jackson. Boy also has wild speculations about his long absent father, Alamein (director Waititi), imagining that he’s an intrepid explorer traveling the world. In one lavish music video scene, his father actually plays the role of Jackson singing and dancing through Boy’s adventures.

One day, his father’s dramatic return doesn’t disappoint Boy’s mythical filial vision: Alamein sports a stylish hairdo, fearsome tattoos and a fine car. He’s even accompanied by his own posse, two fellow members of the Crazy Horses, his biker gang. He takes both of his sons on a grand adventure digging for buried treasure in a field and tells crazy stories that are exciting at first, but are eventually exposed as merely tall tales with no more truth than Boy’s fantasies.

Alamein turns out to be an ex-con who’s just gotten out of seven years in prison for robbery. Boy’s naïve beliefs could be shattered by the realities of adulthood, but his strength enables him to overcome the low cards dealt him at birth, willing him to strive for a better life than his father’s.

‘Declaration of War’: A Fight for Life 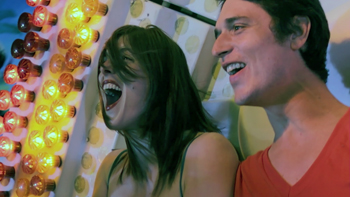 Director-writer-actress Valérie Donzelli, left, and co-writer-actor Jérémie Elkaïm wrote the script for “Declaration of War” based on their own true-life ordeal.

Director/writer/actress Valérie Donzelli and co-writer/actor Jérémie Elkaïm wrote the riveting script for “Declaration of War” based on their own true-life saga when their son became terribly sick. No doubt having lived the reality adds to the total verisimilitude of their story and acting.

The authentic plot, quirky characters and heartfelt performances are enhanced by Donzelli’s masterful direction. She adroitly leverages an array of dazzling cinematic tools that seem to pay homage to the Nouvelle Vague (French New Wave), including quick edits and voiceovers. The stylish camerawork is complemented by lively and sometimes startling elements of music, such as joyful Jacques Demy-like musical vignettes and an eclectic soundtrack infused by disparate elements such as electronica, punk, Laurie Anderson’s “O Superman,” “Manhã de Carnaval” from “Black Orpheus,” and Vivaldi.

Full of life and wrenching emotions, the result packs quite a wallop that will not be easily forgotten. Yet “Declaration of War” is no morbid movie of the week or other typical drama brooding about a life-threatening disease. The raucous film pleasantly surprises the viewer with the humanity of its honesty, humor and love story.

Romeo (Elkaïm) and Juliette (Donzelli), both budding, cute actors, meet at a wild party. They joke that their destiny may be doomed. They dance together in ecstasy on the streets of Paris on the way to becoming an attractive new couple. Suddenly, they find themselves the proud parents of Adam, a beautiful son. Romeo and Juliet live happily for the moment, if not ever after…

Their whirlwind romance is challenged after 18-month-old Adam demonstrates signs of impaired development. Eventually, a neurologist diagnoses Adam’s malady as brain cancer. Suddenly, their life is defined by a battery of doctors, hospitals, CAT scans, MRIs, blood tests, emotional distress and financial worries. When they lose their jobs after spending all their time on Adam’s medical care (which is at least fortunately covered by France’s universal health coverage), they sell their flat to move into hospital lodgings for parents, where they’re on top of each other all the time. And although they’re quickly surrounded by the support of well-meaning friends and family, the escalating tenseness of the situation leads Romeo and Juliet to decide they’re going deep into battle. So together they fight for the life of their child as well as the survival of their own still budding relationship and individual lives. 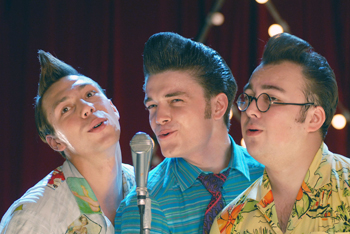 Young Soviets take a cue from “Rebel Without a Cause” to challenge their political system in the Cold War romp “Hipsters.”

Young Soviet communists take a cue from “Rebel Without a Cause” to challenge their political system — in style — in Russian director Valeriy Todorovskiy’s vibrant Cold War romp “Hipsters,” which held the honor of screening as the prestigious opening-night film of Filmfest DC 2010. The enjoyable musical comedy was also a well-received selection in the international film festivals of Toronto, Seattle and Chicago (where it won Best Art Direction). At home, “Hipsters” was awarded four Nika Awards (the Russian Oscar) for Best Film, Production Design, Costumes, and Sound.

In its theatrical release in D.C., audiences shouldn’t miss their lucky second chance to catch a rarely seen genre, the Cold War musical. Unlike the propaganda musicals made by government-run Soviet studios that praised the glories of state and party (some of which were screened in a past series at the National Gallery of Art), “Hipsters” takes advantage of today’s relative freedom of speech in Russia. Written by Yuriy Korotkov and Todorovskiy (a libretto), the wild and crazy story deploys sly allegories to execute sociopolitical analysis, as the high-energy actors poke wicked fun at the drab conformity of the old Soviet political system.

In 1955 Moscow, a critical mass of youth is just as renegade as their counterparts depicted in American films of the 1950s, such as James Dean’s iconoclastic role in “Rebel Without a Cause.” The young Soviet rebels call themselves nicknames borrowed from the United States. They sport carefully styled big hairdos while clad in brightly colored foreign attire smuggled into the black market. Their favorite underground clubs feature banned music like the jazz of Miles Davis and Charlie Parker as well as the rock ‘n’ roll of Elvis Presley (who was also thought rather dangerous to society when first introduced in the U.S.).

As a 20-year-old young communist who’s always followed the party line, Mels (Anton Shagin) lives up to his name — an acronym for Marx, Engels, Lenin and Stalin. A reserved “square,” he initially finds the daring antics of the “hipsters” to be shockingly disturbing. In fact, he’s an officer serving in the fashion police, whose duty is to slice up and destroy forbidden garments while still on the body of the offender, vanquishing the trappings of forbidden culture on the spot.

But then he falls for a hipster girl (Oksana Akinshina) and starts to drink the Kool-Aid himself. He also learns the pleasures of rhythm, picking up dancing and the saxophone along the way, completing his transformation from a former fashion policeman into a stylish icon adorned with a pompadour and the latest Western clothing trends.


The Francophonie Film Festival continues through April 4 with films from French-speaking countries around the globe.

The series “Castles in the Sky: Miyazaki, Takahata, and the Masters of Studio Ghibli” (April 15) features special guest Helen McCarthy, author of “Hayao Miyazaki: Master of Japanese Animation.” The all-day marathon marks the National Cherry Blossom Festival’s centennial along with the National Gallery of Art, the AFI Silver Theatre, and the Japan Information and Culture Center of the Embassy of Japan.