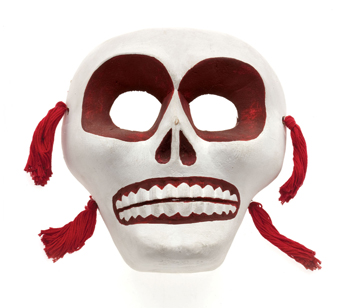 Among the 140 traditional masks on display at the Mexican Cultural Institute are decorative masks such as this mask commemorating “Muerte (Death).”

In the realm of Washington embassies and art, few places have as much fun as the Mexican Cultural Institute.

Housed in a magnificent mansion with a spiral staircase, soaring ceilings and intricate tile and murals, the institute routinely puts on fascinating cultural events from cooking demonstrations to concerts to seminars.

A high-tone exhibition that showcased the lowbrow work of Mexican street artists a few years back was brilliantly whimsical. The institute’s recent partnership with National Geographic to showcase 50 years of the magazine’s Mexican photography mesmerized viewers and made us want to jump on the first plane headed south of the border.

Now, the institute has done it again. “A Thousand and One Faces of Mexico: Masks from the Collection of Ruth D. Lechuga” takes a serious look at the often humorous artistry of Mexicans masks. The masks on display here reflect multiple dimensions of the Mexican identity, from the somber face coverings used in ritual ceremonies to the funny — and occasionally freaky — masks used as part of celebrations.

The Mexican Cultural Institute’s exhibition features more than 140 traditional masks from throughout Mexico along with a selection of figurines and photographs highlighting their ceremonial purposes.

Lechuga, a prodigious collector of folk art who died in 2004, roamed the country for 50 years collecting more than 10,000 pieces, including 1,200 masks. Her mask collection is considered to be one of the most important folk art collections in Mexico.

“A Thousand and One Faces” is an arresting visual display, not only of Mexican art, but of an indigenous footprint of Mexican people. The myriad masks reflect a rich and multifaceted culture that celebrates family, religion and rites-of-passion with gusto.

The exhibition is divided between galleries on the first and fourth floors. It makes sense to start in the first-floor gallery, which offers a good primer, before ascending to the large-scale exhibition on the fourth. 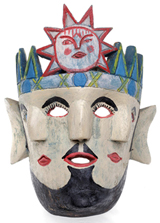 One of the initial masks on display, “Time,” is from Suchitlán, Colima, where the craftsmen are famous for their handmade wooden masks. The “Time” shown here synthesizes the essential elements of all masks: abstraction, duality, expressiveness and symbolism, according to wall text provided for viewers.

A particularly multifaceted (literally) mask is a Christmas pageant dance mask that expresses the struggle between opposite emotions and the intrinsic duality in humanity and nature. Here, the masculine complements the feminine, life is intertwined with death, and day is inevitably followed by night. The artist, Herminio Candelario, represented this abstract notion by creating a visage divided into three and blended from side to side; it has one chin, two ears, three noses, three mouths and four eyes. The faces on each side have feminine features while the center one is masculine and crowned by the sun. Other masks depict natural forces such as sun, rain and fire.

A mask portraying the supreme deity of water — and by connection, farming — features two stylized feathered serpents. Their tails depict eyebrows, while their bodies intertwine and form the nose and eyes. The heads are shown in profile, facing each other and forming a mouth of monstrous fangs.

Before leaving the first floor to head upstairs, it’s worth watching a short video that gives an overview of dances from Oaxaca, Zacatecas, Puebla, Tabasco and Guerrero, areas highlighted in this exhibition.

In American culture, Mexican masks depicting the devil, or Diablo, are perhaps the most ubiquitous of all the indigenous façades. Naturally, these kinds of masks get a showcase here. Devils represent the concepts of good, bad and punishment. According the exhibition’s curators, the devils are part of the process of Evangelization and appear in Christmas pageant dances as well as during Carnival and Holy Week. The Mexican devil masks convey a broad range of expressions, including human traits that are playful or scary features that evoke the misery of hell. 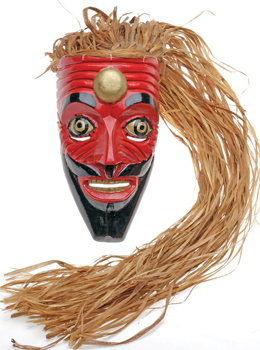 Another type of mask that has become well known, in large part because of a growing awareness of the Mexican Día de Muertos (Day of the Dead) celebrations, are death masks.

Who knew death could be so whimsical? One array of death masks on display here looks more like a party than a funeral. The arrangement’s centerpiece is a grinning, tan skeletal figure adorned with a too-small sombrero and long, unruly wisps of mustache hair. To his bottom right is a more feminine form cast in alabaster white. The female mask sports wide, hollowed-out eyes and a beautiful mouthful of teeth that resembles gleaming white pieces of Chiclets chewing gum.

To Mexican mask makers’ way of thinking, death is as much a part of life as life itself, and the character is celebrated rather than feared in fiestas and dances. In fact, there is much to be celebrated among the Mexican Cultural Institute’s stunning and comprehensive collection of indigenous masks.

A Thousand and One Faces of Mexico:
Masks from the Collection of Ruth D. Lechuga