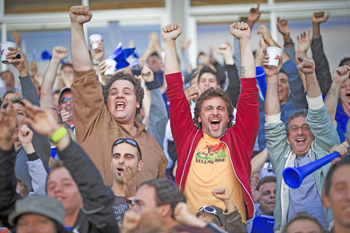 The opening-night selection for Filmfest DC is “Starbuck,” a Canadian film about an overgrown adolescent who learns he’s the father of more than 500 children conceived using sperm he sold to a dodgy clinic in the 1980s.

Filmfest DC, the Washington, DC International Film Festival, returns April 12 to 22 with more than 80 features, documentaries and shorts culled from the best of the latest films from around the world. Now in its 26th year, Filmfest DC is the District’s oldest and largest film festival.

A good number of films are sponsored by area embassies and cultural organizations, and many screenings will be presented by special guests, including filmmakers who will engage in discussions with audiences about their work.

In addition to the main “World Views” section, “The Lighter Side” section shines the spotlight on cross-cultural humor with a slate of international comedies. Filmfest founder and veteran director Tony Gittens explains, “People in every culture enjoy sharing a laugh and smile, and we’re excited to provide an entertaining escape with films from all over the world to the nation’s capital. Now politics isn’t the only funny thing in Washington.”

Meanwhile, the “Caribbean Journeys” section will feature contemporary films from Cuba, the Dominican Republic, Jamaica, Trinidad and Tobago, and more. Back by popular demand, the “Justice Matters” section returns to continue its examination of social justice issues, including the controversial “Pink Ribbons, Inc.” (Canada). Other sections include “Global Rhythms,” “Shorts,” “Filmfest DC for Kids,” “Filmfest DC for Seniors,” “National Gallery of Art” and “First Features.” 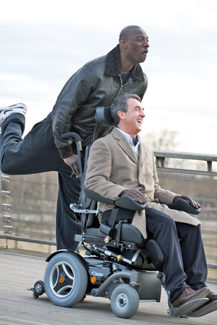 A strong-willed Senegalese caretaker and a handicapped white millionaire make for an unlikely pair in “The Intouchables,” Filmfest DC’s closing-night feature.

Highlights include the opening-night gala, which includes a screening of the Canadian film “Starbuck” by writer-director Ken Scott about a genial screw-up, David Wosniak (Patrick Huard), who’s a constant disappointment to his Montreal family, including his pregnant girlfriend. But one day a lawyer shows up with news that there’s one thing David did do very right indeed: 533 children were conceived using sperm he sold to a dodgy clinic in the 1980s, and now 142 of them want to meet Daddy in Scott’s bawdy but tender comedy about overgrown adolescent.

The closing-night party features Eric Toledano’s “The Intouchables.” The French box-office hit, inspired by real events, tells the story of an unlikely friendship between a handicapped white millionaire and his strong-willed Senegalese caretaker. As these two men from very different worlds become close, their differences take a backseat as they share in the joy and pain of each other’s lives in this heartwarming crowd-pleaser.

Other highlights include a free Filmmakers Salon that invites area directors and festival-goers to discuss the filmmaking process. Panelists include Emad Bomat, co-director of “5 Broken Cameras” (Palestine/Israel/France), Storm Saulter, director of “Better Mus’ Come” (Jamaica), and Larry Sheldon, director of “Leave It on the Floor” (Canada).

Films will be screened at various area theaters, including the Avalon Theatre, Busboys and Poets, the Embassy of France, the Goethe-Institut, Landmark’s E Street Cinema, the National Gallery of Art, the Naval Heritage Center and Regal Gallery Place. Show times were not available as of press time.

Filmfest DC runs from April 12 to 22. General Admission is $11 unless otherwise noted, such as special events. For information, please call (202) 234-FILM (3456) or visit www.filmfestdc.org.