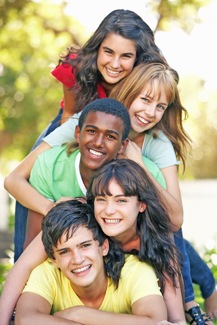 Good news, parents of teenage girls: If you and your daughter make the decision that it’s a good idea for her to get the vaccine against the human papillomavirus (HPV), a sexually transmitted infection that is the leading cause of cervical cancer, she’s probably not going to turn into a raging nymphomaniac.

OK, so they didn’t put it exactly like that, but that’s the basic conclusion of a new study published in the American Journal of Preventive Medicine. Researchers involved with the Centers for Disease Control and Prevention’s National Survey of Family Growth (NSFG) studied 1,200 women between the ages of 15 and 24 regarding their sexual education and behaviors, and found that young women who’ve had the vaccine are no more likely to be sexually active, or to have had multiple partners, than those who didn’t get the vaccine.

Most sexually active people will contract HPV at some point in their lives, though most will never realize it, according to the CDC, which also notes that HPV infection is most common in people in their late teens and early 20s. Most types of HPV cause no symptoms and go away on their own, but some can cause cervical cancer in women and other less common cancers — such as cancers of the anus, penis, vagina and vulva. Every year, about 12,000 women are diagnosed with cervical cancer and 4,000 die from the disease in the United States.

There are two HPV vaccines currently on the market: Cervarix (by GlaxoSmithKline) and Gardasil (Merck), which target the two main types of HPV that are responsible for about 70 percent of cervical cancer cases, although they will not prevent the other 30 percent. Gardasil also protects women against other HPV strains that can cause genital warts, which, though generally harmless, aren’t exactly a pleasant experience.

The HPV vaccine, which requires three doses over six months, is generally recommended for girls around the ages of 11 and 12, because it’s really only effective before people become sexually active and are exposed to the virus. The idea, however, of vaccinating girls as young as 9 in some cases against a sexually transmitted disease has some parents riled up, or at the least somewhat uncomfortable.

But the latest research counters lingering fears that the HPV vaccine is somehow an acknowledgement or acceptance of sexual activity, or will lead to young girls having sex. It’s actually pretty sad though that we need a survey to tell us this. If you have car insurance, does that mean you’re more likely to drive like a maniac because you’re covered if you wrap your vehicle around a tree? If you get your baby the vaccines for rotavirus and pertussis, are you more likely to let the neighbor whose cough sounds like a barking seal hack all over your child? If you have health insurance, do you hope to get sick so you can use it?

Indeed, the CDC study found that not only are young women who’ve had the HPV vaccine no more promiscuous than those who haven’t, they are actually more likely overall to practice safe sex. The research doesn’t explore why, but it makes sense to think that young women whose parents encourage them to get the vaccine, or who are determined enough to get it on their own, are probably overall better educated about safe sex practices.

A few days after the CDC study was released, however, another study came out that seemed to contradict this finding. Published in the Archives of Pediatrics and Adolescent Medicine, it surveyed 339 girls ages 13 to 21 who had the HPV vaccine, and found that 23.6 percent of them thought they were now at reduced risk of contracting all types of sexually transmitted infections. (That’s incorrect: The vaccine only protects against some types of HPV infection that cause cervical cancer and genital warts.)

If you only read the headlines, you’d think that this study means that HPV-vaccinated girls are ill informed about the risks associated with their sexual behavior. But do the math: If 23.6 percent of the girls surveyed were wrong about how much protection the vaccine offers them, then the remaining 76.4 percent were right. Honestly, that’s actually a pretty impressive statistic, given the closed-mouthed, retro-Victorian way in which much of U.S. society still handles the discussion about teen sexuality and its risks. And where’s the control group? Let’s survey another group of teen girls, those who haven’t gotten the vaccine, and ask them about their risks for contracting a sexually transmitted infection based on their sexual behavior. I’m willing to bet that a comparable number of them will be woefully off base.

In fact, organizations like the Kaiser Family Foundation have done just that. In a 2003 survey on the sexual health knowledge, attitudes and experiences of adolescents and young adults, they found that one out of every three adolescents has engaged in oral sex, but one in five is unaware that oral sex can transmit STDs; one in every five young people also believes that they would simply “know” if a potential sex partner had an STD; one of every five young people believes that condoms are not effective in preventing HIV and other STDs; and three out of 10 young people believe that STD testing is a standard part of routine medical examinations (it isn’t).

An even more recent analysis by the Centers for Disease Control and Prevention found that an astonishing 50 percent of teens were not using any method of birth control when they got pregnant, and of these, nearly one third (31.4 percent) believed they could not get pregnant at the time.

In other words, the problem isn’t that young people who get the HPV vaccine overestimate how much they are protected; the problem is that young people overall still have a substantial knowledge gap when it comes to safe sex practices. In the same Kaiser Family Foundation study, more than three quarters of adolescents and young adults expressed a need for more information about sexual health topics, especially HIV/STD prevention.

I’m the mother of three kids; my oldest, a daughter, is almost 6. HPV vaccination, along with safer sex discussions, won’t be on my radar screen for a few more years yet, but I would be naïve to think that my husband and I shouldn’t be prepared to make decisions about when and if to pursue the vaccine for our daughters (and son) by the time they reach middle school. The vaccine doesn’t treat or prevent HPV transmission once it’s contracted, so if you wait too long and try to convince yourself that your child will stay a virgin until college or later, you may have missed your window.

If we had to decide today, we’d choose to have our kids vaccinated for HPV. As a science writer, the data so far are pretty convincing about its safety and efficacy. But I’d also be lying if I said I wasn’t happy that we’ll have at least five more years of accumulated data to help us make our decision when the time comes.

One thing we won’t be worried about, though, is whether or not getting the vaccine will encourage them to engage in risky sexual behavior. As far as I can tell, the best way to encourage risky sexual behavior in your teens is to keep them in the dark about what risky behavior is, and how they can protect themselves. Whatever vaccines you choose for your child, one of the best ways to “immunize” against unsafe sex and its consequences is open conversation.