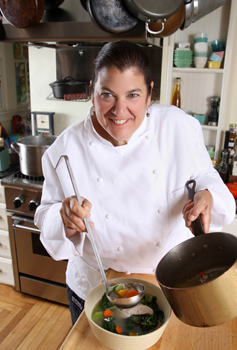 Lacoste Loyalists Should Be Thrilled with Chef’s Long-Awaited Return

In December, Ris Lacoste, one of Washington’s longtime favorite chefs, opened Ris, her long-anticipated venture in the District’s West End. After a decade as executive chef of Georgetown’s celebrated 1789 Restaurant, where she and the restaurant garnered numerous awards and recognition, Lacoste left to open her own place. She and co-owner Mitchell Herman spent more than three years and several million dollars transforming a 6,800-square-foot space on the ground floor of the Ritz-Carlton Residences into Lacoste’s vision of an everyday dining neighborhood café. (Her original working title for Ris was Lacoste Fine Diner.)

While the restaurant’s overall footprint is large, it is divided into seven distinct dining spaces from casual café-like settings to formal dining rooms. The entrance leads into an informal café area with honey-colored hardwood floors and large decorative glass kitchen doors that when open, give diners a full view of the kitchen. (Lacoste hopes to give cooking classes here in the future.) The two main dining rooms, the casual Living Room and more formal Dining Room, can be separated with a retractable glass wall and accessed by a separate entrance. Ris also offers ample space for a light meal with seating at the bar and bar booths as well as the café area.

Two private dining areas, the 10-seat State Room extension of the Dining Room, and the 48-seat Federal Room, are available by reservation or can serve as overflow dining areas. Lacoste has combined design features to create spaces with distinct characteristics and ambience by using a color palette of cream, butter and straw; dark and light woods; slate floors; soft leathers; interesting lighting fixtures; and original print, ceramic and fabric artwork by noted artists. Overall the look is pleasant and soothing, though perhaps a bit understated for some tastes.

Lacoste has tapped Ed Kwitowski to serve as the chef de cuisine of Ris. A graduate of the Culinary Institute of America, he has an impressive resume with stints at Bistro Bis, Vidalia and the Oval Room, where he developed an interest in regional American cuisine and a commitment to working with locally sourced, seasonal ingredients — a passion he shares with Lacoste. 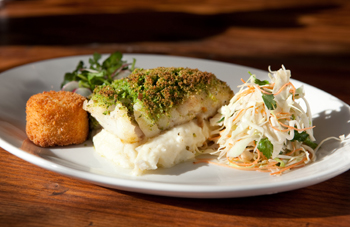 As the dining spaces offer guests variety, so does the menu, which includes an equal number of small plates and entrées that can accommodate all appetites. Though not particularly expansive, the cuisine’s style defies easy classification. It is eclectic and offers diners far-ranging choices from classic American dishes like hamburgers, to Asian-inspired crudos (delicious glazed hamachi, pastrami-cured salmon and citrus tuna), to French charcuterie and Italian carpaccio. Old-fashioned dishes like the sole à la meunière — perfectly pan fried and served with tiny parsley-flecked potatoes — share space with an exotic smoked paprika-crusted Muscovy duck in a sweet and sour cherry sauce.

Though Ris has occasionally been described as specializing in American comfort food, this seems somewhat of a misnomer unless it refers to the fact that Lacoste is American, and what she serves is food that is comforting to her. Lacoste serves what she likes to eat, and her palate is broad. She actually began her career at the age of 12 working for Johnny Gorka’s Polish Market in her native town of New Bedford, Mass. Following her studies at the famed La Varenne Écôle de Cuisine in Paris, Lacoste returned to New England and joined chef Bob Kinkead at the Harvest Restaurant in Cambridge, eventually helping Kinkead open 21 Federal in Nantucket followed by Twenty-One Federal in Washington, D.C. In 1993, as chef de cuisine, she also opened Kinkead’s American Brasserie, which has become a local dining institution, in addition to participating in other D.C. restaurant openings, including Vidalia, Eye Street Café and Rock Creek at Mazza.

Lacoste’s inclusive approach to building the menu at Ris has not diluted her ability to deliver top-notch dishes, regardless of their origin. Whether the dish is a simple green salad, a chicken pot pie, or scallops margarita — a fanciful concoction of lime-marinated Nantucket bay scallops with chilies, orange, avocado and tequila ice — the focus is on the quality of the ingredients and the execution of the dish. Case in point, the carpaccio. The well-textured lean beef is sliced paper thin and served with a dollop of rich anchovy aioli, a scattering of fried capers, and a tiny side salad of arugula and red onion alongside a fat breadstick. It’s a perfect combination and a good example that the whole really does exceed the sum of its parts. Even the humble sardine is transformed when pan-fried with pine nuts, sweet onions, verjus and golden raisins.

While no dish has disappointed in several visits, a number of them have stood out. The gnudi — three smallish ricotta dumplings served with a rich yet mellow tomato and eggplant fondue on a bed of garlicky spinach and sprinkled with bits of crisp prosciutto — is served as an appetizer though it’s a pity that a version is not available as an entrée. Ris’s mushroom pappardelle is equally satisfying, with medium-width pasta that is just thick enough to give a hearty bite. Featuring butternut squash, roasted chestnuts, Brussels sprouts and parmesan, it’s a compelling combination of textures and flavors. 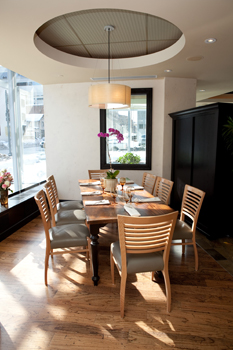 One of the American comfort foods that is on the menu, cider-glazed grilled pork chop, is served in a traditional presentation with braised collard greens, a rich apple-cornbread pudding, shell beans with bacon, and a tasty bourbon sauce. Diners may also recognize the large braised lamb shank. Done in a Middle Eastern style and sitting on a bed of chickpeas, with yogurt, pita, pomegranate, mint and pine nuts, Lacoste credits Lebanese Taverna with its inspiration. It is rendered masterfully, even if it is a copy.

For her pastry chef, Lacoste selected Chris Kujala, who shares her resistance to culinary classification with choices ranging from a heavenly butterscotch pudding with cocoa crisps and chantilly cream; to German chocolate mousse cake in roasted banana sauce; to a passion fruit cheesecake served with blood orange sauce and lemon meringue. Homemade ice creams such as the coffee fudge ripple and sorbets like apple-fig are also worth a try.

Ris offers a full bar with six draught beers and a wine list of 120 varieties showcasing a nice, though slightly pricey, collection of labels from around the world. And the cocktail menu includes old-fashioned favorites like the cosmopolitan as well as some interesting house concoctions such as the easy-to-go-down pink juniper and sparkling pear.

Lacoste’s loyal followers will be happy to know that her signature rack of lamb is on the menu, but perhaps saddened to know that it’s only available on Thursdays. Yet this is perhaps one of the restaurant’s strengths as well. In keeping with her diner vision, Lacoste offers daily themed items, giving visitors reason to come back to sample all she has to offer. And that is part of her plan. She selected the site because it offered the potential to establish a truly neighborhood restaurant as well as destination spot.

If the concept at Ris is comfort, Lacoste is succeeding admirably. The space is warm and welcoming, the food appealing, and the service excellent. With a menu that includes favorites and interesting new dishes, Lacoste has created a bit of something for almost everyone (though vegetarian options are limited). The price point is not really at the neighborhood café level, though there are a few less costly options. Perhaps the only negative is that the noise level can get quite high when the restaurant is full.

And after such a long wait, early indications are that Lacoste’s new spot has struck a chord with old followers and new alike, so it doesn’t look like the crowds will be disappearing at Ris anytime soon. But it’s a small price to pay to welcome back one of Washington’s culinary vanguards.