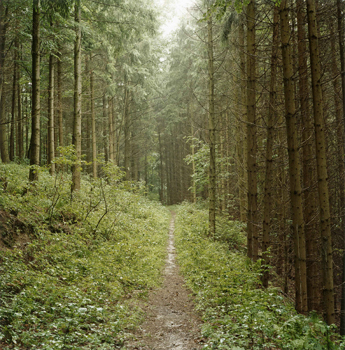 German photographer Bernhard Fuchs spent five years patiently capturing the roads and forested footpaths around his hometown of Helfenberg, Austria, the results of which can be seen at Washington’s Goethe-Institut.

Anybody who’s ever used a camera — and in this digital age, cameras are as ubiquitous as the cell phones in which some of them reside — is to some degree a photographer looking for that perfect picture.

Photographers are always on the lookout, though the cell phone camera might be a schizophrenic distraction more than anything else. Nonetheless, the world is cast in a different light through a lens — the homeless person in an alley, the alley itself, worn fences, painterly clouds in a blue sky, the blur of a speeding car or the tangled branches of a forest. All the world’s a picture and everything we think is old becomes new again — it just takes a little patience to see it.

The young German photographer Bernhard Fuchs seems to have that patient eye, along with a discerning thoughtfulness and enduring appreciation for memory and landscape. He sees in a dirty gully of downtrodden grass the beauty that most others would overlook or quickly forget.

This of course is the rallying cry of any artist: to be empathic with the entire world, whether it’s a beat-up Ford sedan or a spiffed-up Corvette, a prickly bush or a majestic oak tree. Fuchs, in his latest photography book “Roads and Paths” — a 16-photograph selection of which is now on display at the Goethe-Institut — continues on his own artistic path, which began with a book of portraits and evolved into a series of photographs depicting abandoned cars and vehicles.

“Roads and Paths” are contained in 60 images taken in and around Helfenberg, Austria, Fuchs’s prosaic hometown, not too different from any other place. His portraits featured residents of the area, while his 11-inch-by-11-inch landscapes captured abandoned trucks, speedsters, SUVs, sedans and small cars.

But whether human or machine, what Fuchs sees through the lens is clearly precious to him. Over a span of five years, he patiently observed and recorded the landscape of his birthplace with a quiet, reverent eye. The resulting images are striking, though not necessarily beautiful in the traditional sense of the word. There are no fancy shadows gifting a road with meaning, no sunlight touching grass or meadows with miracles, no obvious sort of artifice. Instead, there’s a very intimate modesty at work here, hard to describe but equally difficult not to be affected by, in a delayed-reaction kind of way. You have to stick it out, stand there an extra minute, and let the images bleed into your mind.

Just consider the subject matter among the 16 chosen photographs: roads, paths, crossings, forest footpaths, snowy embankments and fields. There’s not much poetry here — just the well-worn function of a piece of road, grass on either side, a field covered in snow, or a dense array of trees. These are the things we see every day and they register to some backyard space in our minds, an attic of no significance. We don’t note them except for maybe a pretty sapling, sure, but not the plain cement or even the cracks in the sidewalk. We just walk over them, physically and visually.

But not Fuchs. His roads and vehicles, left behind, still seem alluring. They are out of place among the trees, the dirt, the furrowed field, the indentation against the highway — yet that’s precisely what brings them into sharp focus.

The images in “Roads and Paths” are singular because they’re almost invisible, worn out by the weather or by our hands and feet. They fade but that’s part of their indelible beauty, as they hum quietly along with the careening of time.

Fuchs takes the road less traveled by paying homage to that road, and everything on and around it. He sees a well-worn path or a tired old car for the first time all over again. And in this way, he drives our own imaginations and forces us to look at everything anew, from the ground up.