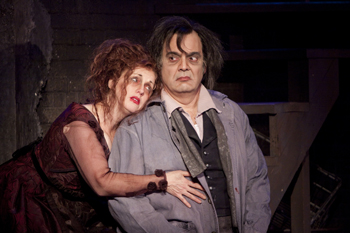 How could the absurd tale of Sweeney Todd — a loving family man turned ex-convict turned cannibalism entrepreneur — become a Broadway sensation and considered by many as composer Stephen Sondheim’s most popular accomplishment?

More important, it somehow takes us unaware. We — the unsuspecting audience — enjoy being manipulated by relentless turns and twists and the constant element of surprise (Should we look? Will we laugh? Will we scream?). We have no more control of our emotional fate than do Todd’s hapless victims. Our eyes glaze over like children listening to the story’s morbid nursery rhyme: “There’s a hole in the world like a great black pit / And the vermin of the world inhabit it / And its morals aren’t worth what a pig could spit / And it goes by the name of London.”

“Sweeney Todd” was Signature Theatre’s first musical and began its long history with Sondheim productions. Signature got it right when it decided to return to this crowd-pleaser to punctuate its 20th anniversary season. 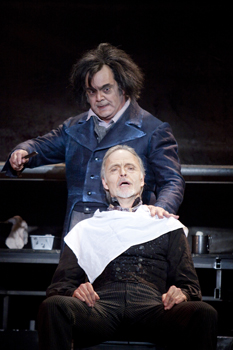 Artistic Director Eric Schaeffer made the ingenious decision to pull out all the stops for this occasion. The gaps between laughter and delightful revulsion are extreme. Unrestrained confidence commands the costumes, scenery, casting, directing, acting and music. The play’s billing as “a musical thriller” is an understatement here. Every crash of cymbals, every evil stare out of sunken, blackened eyes, and every hideous groan punches spectators right in the gut.

Sweeney Todd is an abominable guy. However, we don’t mind empathizing with him. Sweeney (his real name is Benjamin Barker, but he now goes by Mr. T to his close friends) has had a hard life. Once a happy barber, blissfully married with a beautiful wife and newborn child, he was subsequently robbed of his family by a crooked judge who conveniently had him charged on false accusations and locked up.

Now he’s back in London, setting up a new barbershop, where he murders his customers, declaring, “I will have vengeance … salvation.” Thespian lovers never could resist a tragic character. Even his accomplice, the comical bakeshop owner Mrs. Lovett, who makes “meat” pies out of Todd’s victims, is a maternal romantic at heart. On her breaks from butchering she knits scarves for her adopted “simple boy,” who lost his master to the barber’s knife, and she dreams of her ideal betrothal to her meat supplier.

Sherri Edelen, well known by D.C. audiences for her Helen Hayes wins, could not be more endearing as Lovett. Of all the cast, she seems the most comfortable and organic in a role that demands such a stretch to the morose imagination. Edelen leaves her youthful attractiveness behind and turns into a rubber-faced, resourceful old widow who has a knack for turning poverty into profit and dancing a jig when she’s excited. Edward Gero, as macabre Todd, gives a heartbreaking performance with the right amount of tongue-in-cheek melodrama.

Goth makeup and costumes blend beautifully with dramatic lighting that floods the stage in blinding brightness at one startling moment and turns into looming shadows on a dime. James Kronzer’s set, depicting a 16th-century, London ghetto, extends from the stage, through the audience, and out into the lobby. Linty, filthy, asbestos-ridden-looking fabric covers the ceilings and walls, while buckets of blood on a pulley extend up into the air. 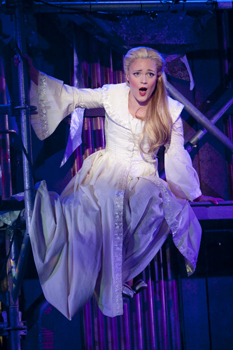 The word-heavy script is genius with its contrasts and rhyme. Todd sings a sweet melody about his beloved daughter, Johanna, while slitting customers’ throats and propelling them down a chute into the basement furnace. Lovett meanwhile sings to Sweeney her idea of using humans for pies: “Seems an awful waste, with the price of meat. Think of it as thrift, as a gift, if you get my drift!”

Contrast also is used for gravity. Todd, Lovett and a sundry array of townspeople live in a harsh, gruesome world of beggars, thieves, poverty and darkness. Meanwhile, beautiful Johanna is effervescent in a white, virginal gown and her would-be suitor, a tender sailor named Anthony, is surprisingly naïve.

Todd warns Anthony: “You are young; life has been good to you. You will learn.”

At the play’s end, after Todd’s plan of revenge spins out of control, we wonder if his warning of “you will learn” is his own foreshadowing. One thing is clear: Don’t worry about the dead bodies littering the stage. The end is nowhere in sight for Signature and Sondheim’s union — a harmonious marriage of 20 years and counting.