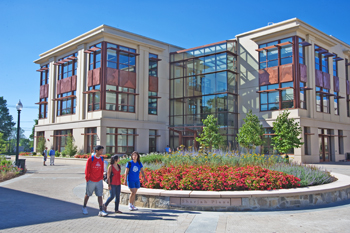 Here’s a puzzle: College campuses across the United States have seen a 32 percent increase in international students since 2000, reports the Institute of International Education (IIE) — even though global test scores show that the U.S. education system is lagging far behind its overseas counterparts such as powerhouses like Finland and Singapore.

High school students in the United States ranked 32nd among nations in math proficiency tests last year and were 17th in reading, according to a study headed by Harvard professor Paul Peterson.

However odd this conundrum, the steady stream of international students coming to the United States makes sense, said Allan Goodman, president and chief executive officer of IIE, a nonprofit based in New York City.

“First,” Goodman explained, “it’s demographics: More young people around the world are finishing high school and needing to go to college, and this age group is expanding.”

“We have room. The biggest education shortage in the world is in higher education. And no other country has our capacity when it comes to accredited institutions. The United Kingdom has about 250. We have 4,000,” he told The Washington Diplomat.

But the biggest advantage America has is quality, Goodman says. “College and university standards are high across the board. There’s relatively little corruption. As a result, people worldwide want higher education that’s ‘made in the U.S.A.'”

So you have to decouple those dismal test scores from the university system, Goodman said. Unlike many countries, we send most students onto high school — and test all of them, he also pointed out. “We don’t lack for qualified high school students in this country. There’s a big demand for entrance to the top universities — and they get in.”

Goodman has a bird’s eye view of these trends. IIE designs and manages international scholarships, administers the U.S. State Department’s Fulbright Program, recruits scholars in unstable or war-torn nations, and runs the “Open Doors” data collection initiative on international students and scholars in the United States.

He concludes that the United States has constructed a tremendous higher education system and as the old adage goes, build it and they will come. And come they have — from all over the world.

Much of this increase has, not surprisingly, come from emerging nations such as China and India (also see “Indian Influx: Higher Education’s Frequent Flyers” in the January 2012 issue of The Washington Diplomat). Yet among this surge is a little noticed but important group of countries doing their own nation building with educational construction blocks: the Central Asian “stan” countries of Kazakhstan, Uzbekistan, Turkmenistan, Tajikistan and Kyrgyzstan.

Students walk by Sharjah Plaza outside the new School of International Service building at American University, which hosts both graduate and undergraduate students from Central Asia.

Across in the United States in 2011, colleges and universities hosted 3,188 students from Central Asia, according to IIE’s Open Doors data; most were from Kazakhstan (1,890) and Uzbekistan (560). They were enrolled at about 50 institutions across the country, including the universities of Montana, Texas, Chicago, Indiana and Boston, Drexel, Rutgers, Penn State and Arizona State. In the D.C. area, students from Central Asia attended George Mason University, George Washington University, American University and the University of Maryland at College Park.

Central Asian countries “are a sleeping giant — on the rise economically and politically,” said Fanta Aw, director of international student and scholar services at American University, which hosts graduate and undergraduate students from this part of the world.

Aw told us that these students “are looking to international education as part of their programs for development, not just looking to Russia or the U.S., but to the West overall.”

Still, they are an unfamiliar entity to most Americans, and not just because their numbers are relatively low compared to international students from China or India. “I find that the general public here is not quite aware of our region. For many people Central Asia is still a remote area of ‘stans’ next to Afghanistan,” said Faizrakhman Kassenov, a mid-career diplomat from Kazakhstan who is working on a master’s degree at Columbia University’s School of International and Public Affairs in New York City.

Similarly, Vladimir Inozemsev of Turkmenistan, a University of Maryland MBA student, said he’s found “very little knowledge about the region overall” among Americans and a perception that all Central Asian countries are the same even though each has its own unique culture and history. 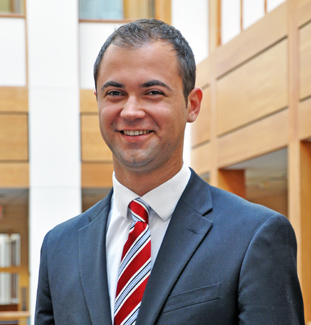 However, these nations do have a contemporary commonality: All five were formerly part of the Soviet Union. They became independent republics in 1991, with continuing strong central rule and varying degrees of democratization ever since.

All are also ethnically diverse nations (Kazakhstan boasts some 100 different ethnic groups and at least nine Persian-related languages are spoken in Tajikistan), and they boast nearly universal literacy — around 99 percent. Islam is the most common religion and Russian is the lingua franca, with the use of English on the rise. The region’s development has been bolstered by its substantial oil and gas reserves.

Likewise, Boston University has one student from Tajikistan, two from Kyrgyzstan, and 61 from Kazakhstan. Many from Kazakhstan are “Bolashak” scholars, explained Jeanne Kelley, director of Boston’s International Students and Scholars Office. “This is a government-funded program that sends students all over the world so they can go back and build infrastructure there,” she said.

The program was created by President Nursultan Nazarbayev in 1993 to foster the “skills and knowledge to build a democratic and prosperous society,” according to the Embassy of Kazakhstan in Washington’s website, which notes that “to fill the gap in qualified academic and scientific staff for national universities and engineers for industry, the Bolashak will continue sending Kazakhstan students abroad to study for master’s and Ph.D. degrees, including at top U.S. universities.”

One of those universities is Indiana University at Bloomington, home to more than 7,000 international students, including 43 students from Central Asia — and Kamilya Salibayeva is one of them. A Bolashak scholar, this sophomore neuroscience major from Kazakhstan is already planning on getting her Ph.D.

Reflecting on the differences between the education system in her homeland versus what she’s seen in the United States, Salibayeva said, “The Kazakhstan system was inherited from the Soviets and takes a more practical approach. Where you might study reactions in chemistry there, here I took a general chemistry course that started with quantum mechanics.” 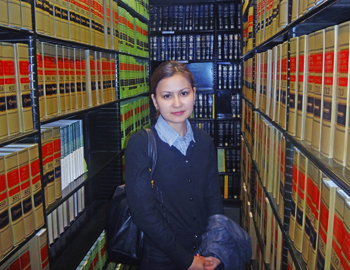 Fellow Indiana student Assel Kaziyeva, also from Kazakhstan, holds a master’s degree in law and business and is currently working on a comparative law degree. She said academics in the United States tends to focus on analytical skills and discussion, which is helpful in her profession. “I’m a third-generation lawyer,” she explained. “My grandmother was a judge, my grandfather a prosecutor and my father is a lawyer and economist. My mother teaches.”

Gulrukh Shakirova, an accomplished pianist from Uzbekistan studying and teaching at Indiana University’s Jacobs School of Music, observed that unlike the United States, Uzbekistan offers music schools for grade-school children. But here “you have more options” academically and more freedom to choose courses, she said.

Judith Green helps these kinds of students navigate the nuances of different cultures. She serves as director of the Office of International Programs and Services at George Mason University in Virginia, home to about 2,000 international students, including a dozen from Central Asia.

Green said that students from countries sending large numbers to U.S. campuses, such as India, generally don’t need help finding friends or practical advice, while those with fewer compatriots may need that guidance, so it’s particularly important that a university step in with assistance programs.

In addition to offering the usual help with visas, settling in and trouble-shooting, Green says her programs avoid the typical “talking heads” student orientations and send new international students on scavenger hunts instead to get to know their surroundings, as well as “jazz night” outings and bus trips to Monticello, home of Thomas Jefferson. 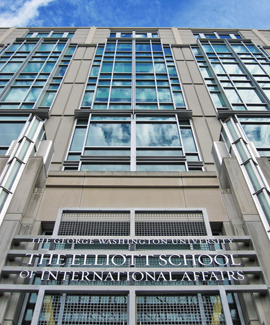 The George Washington University’s Elliott School of International Affairs has the largest number of international students in the District of Columbia, 2,837 as of last year.

George Washington University has the largest number of international students in the District of Columbia, 2,837 as of last year. GW graduate student Yulia Usmanova of Uzbekistan, who is studying security issues and conflict resolution at the Elliott School of International Affairs, said she chose the university for its programs, location and pricing.

A former exchange student in California, Usmanova has had had few cross-cultural challenges. She joked that life in D.C. is more fast paced than in California, where suits and ties are far more uncommon than in the nation’s capital.

Columbia University in New York City is one of the nation’s top destinations for international students, hosting more than 7,000 in 2011. Columbia currently has students and scholars from all five Central Asian countries, including 17 visiting professors or researchers, 32 students, and a range of institutes, resources and programs geared toward them.

One is the Harriman Institute, home to longstanding Russian, Eurasian and Eastern European studies that recently introduced cutting-edge programs focusing on Central Asia.

Timothy Frye, director of the institute, said Harriman has expanded its research into Central Asia’s post-Soviet development, with highly active programs in energy policies across the region. For example, in April the institute held a conference on regional pipelines that drew international scholars, officials from Central Asian governments, and a speaker from the White House National Security Council.

Given the combined strength of Columbia’s programs and the Bolashak scholarships, it’s not surprising that the university would draw someone like Faizrakhman Kassenov, the Kazakh diplomat studying international security at Columbia’s School of International and Public Affairs.

Kassenov has served as Kazakhstan’s consul to Hong Kong and Macao, and he is the founder and chair of a New York-area Bolashak Student Association. Kassenov, his wife and three children live in Queens, a borough of New York City, among a Bukharan Jew community that emigrated from Central Asia. Their oldest child was born in Hong Kong, their second in Kazakhstan, and their youngest in the United States.

The incredible melding of and exposure to different cultures among these students also reveals fascinating aspects of their homelands, as well as changes within U.S. society — some good and some bad. 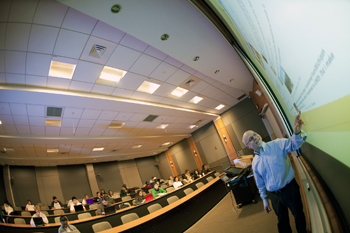 Professor Ronald Yaros teaches a class in the Knight Hall Journalism building at the University of Maryland in College Park, one of several area universities that welcome students from Central Asia.

On the down side, Inozemsev said he is surprised by “how much people consume here” and the way “the American dream” of upward mobility seems to be disappearing.

But overall, he said he loves living in the D.C. area with “people from all over the world” and admires the U.S. learning process because it “allows a discussion of many diverse perspectives” and encourages “open-minded, creative but critical thinking.”