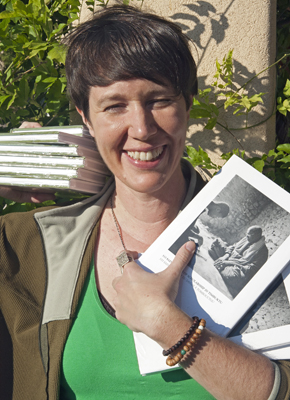 When Alexandra Huddleston traveled to Mali in late 2006 to devote 10 months of her life to photographing the people and culture of Timbuktu, little did she know that within five years, that culture would be threatened with destruction by Islamic fanatics.

Hence the urgency of her book, “333 Saints: A Life of Scholarship in Timbuktu.”

The 96-page volume details the richness of the ancient city’s culture of learning, which produced Africa’s biggest concentration of Islamic manuscripts.

“The original goal of my work was, in large part, to show a side of Africa that was different from so many peoples’ preconceptions — instead of always pictures of war and famine, to show a beautiful, strong, ancient culture of scholarship. And I definitely hope the book still does that,” Huddleston, 35, told The Washington Diplomat.

Photographer Alexandra Huddleston, bottom photo, holds copies of her new book “333 Saints: A Life of Scholarship in Timbuktu,” featuring photographs depicting the people and culture of Timbuktu, an ancient center of Islamic learning in Mali.

“But without a doubt, the events of this past year have definitely changed some of the book’s objectives. So many articles were written about the destruction of the shrines, but if they hadn’t become UNESCO World Heritage Sites, I don’t know that people would have cared,” she said. “The destruction of those shrines can’t be underestimated. It was really an attack on the Muslim religious culture of Timbuktu. My book shows the culture that has been under direct attack.”

The photographer, who was born in Sierra Leone and grew up in Washington, D.C., and in West Africa, now makes her home in Santa Fe, New Mexico. She’s the daughter of Vicki Huddleston, who had been economic officer at the U.S. Embassy in Bamako early in her diplomatic career, returning there as ambassador from 2002 to 2005.

But Alexandra Huddleston kept that fact a secret from the locals — mainly to avoid being kidnapped by armed groups that were already starting to terrorize the region.

“I very much downplayed my whole connection with the U.S. government,” she said. “For awhile they had U.S. Army Special Forces in Timbuktu training the Malian army in the desert. But clearly my project had been cleared by the embassy beforehand. When I arrived there in late 2006, they had just posted Peace Corps volunteers in Timbuktu for the first time ever. But the week after, they pulled those volunteers out.”

The French-speaking Huddleston said she was advised by the U.S. Embassy in Bamako — the same one her mother had served at up until the year before — not to travel to Timbuktu because of increasing unrest.

“When I arrived in Bamako, the embassy said, ‘We don’t think you should go to Timbuktu.’ But all the Malians I knew were telling me I’d be fine as long as I stayed in town. So I laid low for a month or so. I went to Gao so they’d forget about me.”

Huddleston eventually returned to Timbuktu and immediately began documenting the city’s scholars, noted for their Arabic calligraphy and meticulous preservation of ancient religious texts down through the ages.

“Religion is something that has fascinated me since I was a child,” explained Huddleston, who’s also lived for long periods in Cuba, Haiti and Madagascar — all places where her parents were posted during their Foreign Service careers. “During my visits to Timbuktu in 2003 and 2004, I really liked the people I met there. And I liked the town, even though most people who go there see only this bland façade of mud brick buildings and exterior blankness. I was lucky enough to make many friends.”

And having spent much of her childhood in West Africa, Huddleston knew enough to drink only filtered water and to be respectful of Muslim traditions by dressing modestly (that meant long pants) and covering her hair with a bandanna. 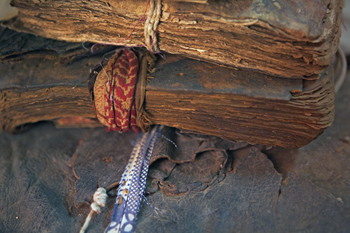 But there were times the young American, who holds a bachelor’s from Stanford and a master’s from Columbia, became incredibly lonely. “I would go to an Internet café once every three days. There was a huge sense of isolation,” she recalled.

On the other hand, she said, “I went there with very good connections, and I don’t mean my mother. I was on a Fulbright grant, and they require you to have a local sponsoring organization. So even before I got the grant, I had arranged it would be SAVAMA-DCI, a group that had received millions from the Ford Foundation. I arrived in Timbuktu already being supported by two families heavily involved in the manuscripts, two aristocratic families that had a lot of power.”

Huddleston shoots with a Canon 5D digital camera, which she said was “top of the line six years ago.” Surprisingly, of the more than 10,000 images she took while in Timbuktu, in the end only 37 made it into her book.

“It’s a pretty modest book,” she said. “This is a complicated enough story for Westerners as it is. So I went through numerous edits over the last four years and, in the end, I decided the tighter, the better.”

Huddleston, who’s also worked in Niger, Western Europe, Cuba and Japan, said she had no problems photographing Timbuktu’s Islamic scribes. “Most of my photos were taken in situations where you can’t get in unless you arrange it ahead of time,” she said. “I’ve become very good at taking pictures of people as if I’m not there, but that’s part of the skill of being a professional photographer.”

Huddleston self-published her book, raising the money through Kickstarter, the world’s largest crowd-funding platform. The photographer said she chose that route because she was “turned off” by established publishers. 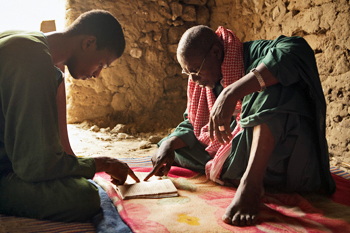 “Unfortunately in the art book world, it’s very common to ask the artist to hand over $20,000 or more to make the book happen. Essentially, the publisher takes no financial risk,” she said, adding that self-publishing gave her complete control over her project from start to finish. The book was printed last month in Iceland in a limited edition of 500 copies, 200 of which have already been sold through Kickstarter.

What makes “333 Saints” urgent, says Huddleston, is the speed at which Islamic fundamentalists linked to al-Qaeda were destroying Timbuktu’s monuments and threatening a moderate brand of Islam that had developed over centuries.

“When they took over Timbuktu, the Islamists banned certain aspects of Western culture. Certainly in the Western mind, what people are going to focus on are the things we’re most familiar with, like smoking, drinking and wearing modern clothing. But in fact, what the Islamists attacked just as much — if not more violently — were aspects of Timbuktu’s ancient culture, like music and the celebration of Mawlid, a Muslim holiday that celebrates the birth of the Prophet Muhammad,” she said.

Huddleston, who has since gone on to photograph religious pilgrimages in both Spain and Japan, notes that “333 Saints” only briefly touches on the effect the militant Islamist takeover of Timbuktu had on the city’s scholarly and religious culture. But by showing the strength of Mali’s own Islamic culture — characterized by tolerance and plurality — her book explains why most Malians welcomed the French military intervention and rejected the imposition of Sharia law by the rebels, even if it came under the guise of Islam.

“People not just in Timbuktu but all over the region believe that if you write a certain passage of the Koran onto a board and wash it off and drink that ink, it has the power to heal different parts of the body. So scholars and manuscripts and religion are tied together in this incredible, visceral way,” she said. “So attacking the tombs of the saints is attacking the culture of scholarship as well.”