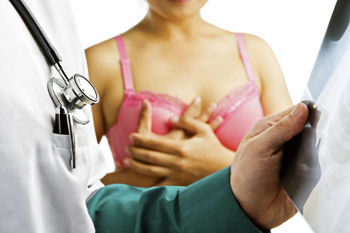 Does a woman’s desire to look and feel better about her body threaten the health of her body? This spring brought a storm of cancer-scare headlines for women with breast implants.

The headlines were triggered by a survey published in the prestigious British Medical Journal in April. A meta-analysis (a review of existing research) found a 26 percent increased risk of discovering cancerous breast tumors later in women with cosmetic breast implants — that is, after the tumors had started to spread to other parts of the body. Additionally, these women had a 38 percent greater risk of death from breast cancer than women who didn’t have implants.

Dr. Jacques Brisson, the lead author of the study, and his Canadian colleagues found that 84 percent of women with implants and cancer survived at least five years. That was lower than the five-year survival rate of 88 percent among women without implants who had cancer.

All the study subjects lived in Canada. Survival rates for women in the United States are similar and they’re “a little lower” in Europe, Brisson told www.medscape.com, an online news site for physicians. Brisson is a professor of medicine at Laval University in Québec and a director of the Québec Breast Cancer Screening Program.

Experts reviewing the Canadian survey explain its findings by pointing out that breast implants can interfere with good mammogram images and cause difficulties in detecting early breast cancers. 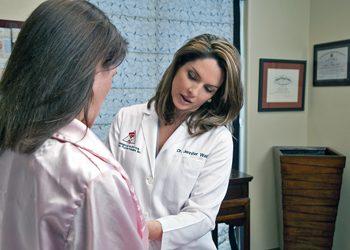 The potential impact of Brisson’s work is huge, so it’s no wonder it created quite a stir: One in eight women will get breast cancer at some point in her life.

“Breast cancer is the top cancer in women both in the developed and the developing world,” according to the World Health Organization — and that includes the United States.

Add some startling implant facts and you have the ingredients for a storm of concern: Breast augmentation involving saline or gel implants is the number-one cosmetic procedure in the United States, with 330,631 implant procedures performed here in 2012 alone, according to the American Society for Aesthetic Plastic Surgery. That makes this country number one in such surgeries worldwide.

But its popularity is not confined to the United States. Breast augmentation turns out to be the second most popular cosmetic surgery on the planet. After the United States, the highest numbers of implant procedures are done in Brazil, China, Japan and Mexico. The augmentation global total came to more than 1 million such procedures in 2011, according to the International Society of Aesthetic Plastic Surgery.

This is certainly not the first controversy engulfing breast implants. Safety concerns were raised over the silicone in breast implants in the 1990s, but things quieted down when the U.S. Food and Drug Administration (FDA) said silicone implants were safe and effective — if not totally trouble free.

Similarly, in 2011, breast implants were alarmingly linked to a very rare immune system (not breast) cancer in 31 cases found among an estimated 5 to 10 million cosmetic breast implants worldwide; about 30 more cases may exist. The FDA advised no action on this cancer, called anaplastic large cell lymphoma, other than conducting research and collecting more data. Major cancer organizations agreed.

So what is the practical fallout of the Canadian study for women with breast implants? How does it affect those considering cosmetic breast enhancement? 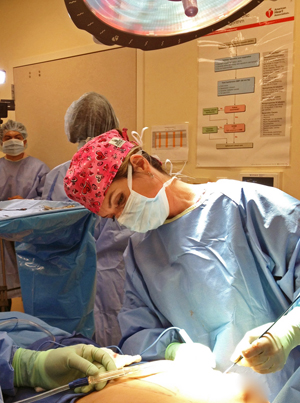 Dr. Jennifer L. Walden, a cosmetic plastic surgeon in Austin, Texas, performs a breast augmentation with silicone implants. She says accumulated science attests to the safety of breast implants and shows no difference in breast cancer survival rates for women who have them.

“I’d like to … stress that breast cancer incidence is not greater among women with breast implants,” Brisson said in his Medscape discussion.

Overall, women with implants do not die more frequently from breast cancer, he added. Studies even show they tend to have slightly lower death rates than the general population. (Some experts suspect this occurs because women who seek implants are often healthier than the average woman in the first place and are more aware of their bodies.)

And the mortality findings in his Québec study apply only “to women who are diagnosed with breast cancer following implants,” Brisson noted.

Brisson also said his team’s scientific results should be “interpreted with caution.”

Dr. Jennifer L. Walden, a cosmetic plastic surgeon in Austin, Texas, agrees, saying, “It’s one study amidst a large body of literature.” That is, accumulated science attests to the safety of breast implants and shows no difference in survival rates for women who have them, she told The Diplomat.

Walden is the author of award-winning research articles and a textbook on cosmetic plastic surgery. She has also developed her own breast surgery instruments. Board certified by the American Board of Plastic Surgery, she recently relocated to Austin from New York City, where she taught surgery at New York University.

Walden said caution is also called for because the Canadian survey examined the results of 12 observational studies, all published after 1993 and conducted mainly in the United States, northern Europe and Canada, while a more typical overview might examine “100 or even 200” studies. This made for a scientifically “weak paper and you can’t draw powerful conclusions from it,” she said, noting that additional studies are needed.

Finally, the Canadian analysis couldn’t control for things such as age or patient weight, important factors when it comes to breast cancer risk. And “only five studies looked at the chance of dying of breast cancer.” In others, “the cause of death is not identified,” Walden said, which means that the patients could have died from another disease, from a heart attack, perhaps, or from an accident.

Indeed, the authors of the study warned that their findings “should be interpreted with caution as some studies included in the meta-analysis on survival did not adjust for potential confounders.”

However, Walden emphasized that the Brisson study does make it more important than ever “for women to understand that implants can obscure as much as 20 to 30 percent of breast tissue on mammograms.” 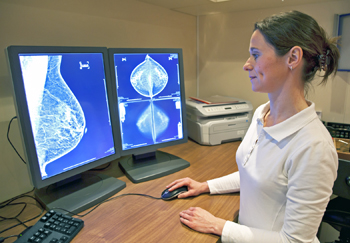 A survey earlier this year suggested that breast implants can interfere with good mammogram images and cause difficulties in detecting early breast cancers.

Cosmetic surgeons have an obligation to inform women that implants make early detection of breast cancer more difficult, she said. An implant surgery candidate should have a conversation with her doctor about her family’s cancer history and genetic cancer risk, as well as any previous biopsies or lumpectomies, and she should have a baseline mammogram.

“We generally discourage women with a high risk of breast cancer from getting implants,” Walden said.

Patients “have an obligation to do research and to understand the cosmetic procedures” they’re interested in. In addition, after the surgery, they should be picky when it comes to mammogram providers and should ask their breast surgeon or gynecologist for referrals. If a woman has breast implants, “the radiologist who interprets the mammogram and the technicians who do it need to be well versed” in imaging breast implants, Walden said.

“Many radiology suites don’t perform mammography at all these days,” she explained — and the ones who do may or may not have the specialized skills needed by a woman with implants. Women with implants need a radiology practice with a large volume of mammography procedures and implant imaging skills, Walden advised. They also need a technician who will do additional views and understands implant-specific procedures.

Brisson emphasized the same thing in his Medscape discussion. When a woman has breast implants, specialized positioning techniques can be used during mammography, and imaging specialists “should make sure that imaging guidelines for women with implants are followed,” he said. Even so, experts warn that some breast tissue is going to be obscured by a breast implant during any mammogram.

To deal with that, Walden said patients should understand that more sensitive breast imaging procedures such as MRIs or ultrasounds are available and may be called for, although they are expensive, not always covered by insurance, and can have high false positive rates. (False positives can result in biopsies of suspicious tissue that turns out to be perfectly fine.) 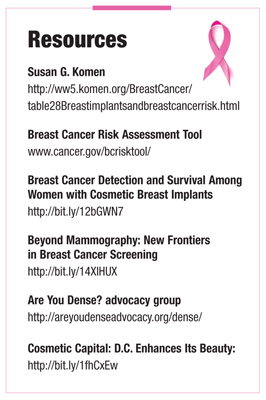 Drukteinis, a radiologist with the Moffitt Cancer Center in Florida, places women with dense breast tissue in a high-risk group that needs better detection of breast cancer because their breast tissue poses mammogram problems similar to those afflicting women with implants.

Dr. Richard Reitherman of the Memorial Care Health System in California couldn’t agree more. About 40 percent of all women have dense breast tissue that makes accurate breast imaging more difficult, he told The Diplomat. These women are “logically” in a cancer risk category similar to those women with cosmetic breast implants and need to practice similar prevention and precaution strategies, he said. Insurance coverage of the additional imaging depends on a patient’s risk level, Reitherman noted.

Twelve states now have mandatory notification laws that require doctors and mammogram clinics to tell patients in writing if their breast tissue is dense, and advocates such as Reitherman would like to see such laws in all states nationwide. California’s notification law went into effect last March and Maryland’s in October.

The advocacy effort is controversial. The American College of Radiology, in a 2012 position statement, said it “recognizes that breast density has a impact on mammographic screening” and states that the group would support an FDA requirement that breast density information be included in a patient’s mammogram report. However, the report also noted that breast density standards are hard to judge and “not reliably reproducible.”

It also stated that while breast MRIs are more sensitive than mammograms or ultrasound, they also produce false positives and urged “all stakeholder [to] proceed with caution.” Meanwhile, the FDA is taking a regulatory route and in December will publish a notice of proposed rulemaking that requires doctors to add density information to the standard letter about mammogram results sent to women who have had one.