Home The Washington Diplomat November 2013 ‘Voices’ Yearn to Be Heard as Human Beings, Not Headlines 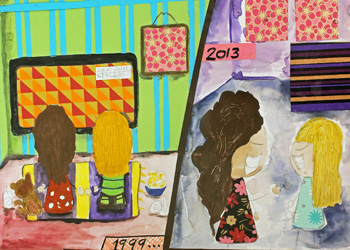 The Phillips Collection has a longstanding and fruitful relationship with Jacob Lawrence’s “The Migration Series,” a mid-20th-century sequence of paintings that depicts the mass movement of African Americans from the rural south to the urban north between World War I and World War II.

The gallery has long used the series to conduct community outreach. But it wasn’t until a young American diplomat wandered into the gallery in the summer of 2012 and had an epiphany that Pakistan got involved.

The diplomat, Ajani Husbands, the assistant cultural affairs officer at the U.S. Embassy in Islamabad, became fascinated by “The Migration Series” and approached museum officials with an idea. Why not use it as part of a cultural exchange with Pakistan, a country vital to U.S. interests but often misunderstood by Americans? The museum liked the idea and Husbands teamed with the Phillip Collection’s Rachel Goldberg. As the two traveled Pakistan, they worked with more than 100 young Pakistani artists ranging in age from teenagers to the mid-30s to tell their stories of life in the complex South Asian nation.

The results of that collaboration are on view at the Phillips in “Pakistani Voices,” featuring works such as “Leaving All Behind,” by Sidra Ali, Huma Arshad, Abid Khaleed, Noor Ul Huda and Hunian Hayat.

The resulting art exhibition — 29 works by emerging Pakistani artists and 20 works by students — tells a tale of a country rife with danger and violence, but also vibrant with color and the routine rhythms of family life.

One of the exhibition’s most arresting pieces is “Silent Voices,” a pastiche of calm, urban scenes in each corner of the canvas, which are centered around the live, dangling wires of a telephone pole. The effect is kinetic, electric and a bit jarring. The trio of artists who produced the piece — Farrah Khan, Rabia Yaseen and Aasma Majeed — seems to be saying that life in urban Pakistan is normal, until it isn’t. 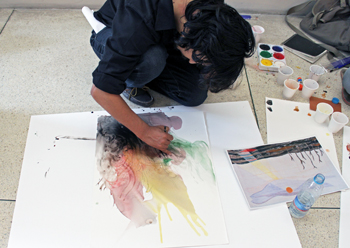 Pakistanis participate in an Emerging Artists Workshop at the Alhamra Arts Center in Lahore during a program organized by the Phillips Collection and the State Department.

“Best Friends” looks as if it could have been produced by an American adolescent girl, albeit one with a bit of a morbid streak. In the garishly colorful series’ first panel, two young girls quietly enjoy each other’s company as they watch the Cartoon Network in front of the television. The next panel depicts what looks like a tense argument accentuated by a lightning bolt between the two girls’ visages. Next we see a bleeding wrist and scenes of an afterlife. It’s pretty intense stuff.

In an interview, Goldberg said she collected hundreds of pieces of art in Pakistan and had a very difficult time deciding which ones to hang in the limited exhibition. But she said the one theme that emerged was these young Pakistanis desire for the larger world to know their story.

“The one thing that really struck me about all the students who created artwork is that they all wanted the outside world — particularly the Western world — to see them as human beings, to see them outside this typical Western media portrayal of what a Pakistani is,” Goldberg said. “Everyone from the little kids to the experienced artists really wanted people outside of Pakistan to know who they truly are as human beings and they tried to work that into their art.”

Pakistani Voices: In Conversation with the Migration Series