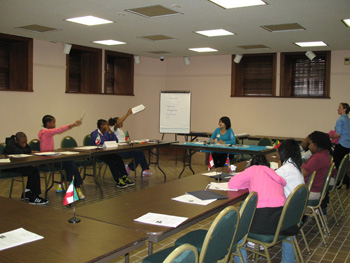 Washington’s HIV infection rate is high enough that most students in the city either know about the disease or have personal experience with it. So, when considering global topics for this year’s Model United Nations program, the HIV/AIDS crisis was a natural choice to help students connect with other countries and cultures.

But at the area’s upcoming Model U.N. conference this month, high school and middle school students will do much more than rattle off statistics or basic facts about disease transmission. They’ll take on the role of U.N. diplomats, proposing and voting on resolutions, giving speeches, negotiating with colleagues, and moderating discussions pertaining to HIV and a host of other pre-selected issues affecting countries all over the world. By doing so, they not only learn about global problems, they can feel like part of the solution.

Model U.N. allows students to step into the shoes of ambassadors from U.N. member states to debate current issues on the organization’s agenda. The concept used to be an extracurricular activity in suburban — and by extension, often affluent — schools in select pockets of the nation. No longer. The District is one of a rising number of metropolitan areas where Model U.N. is becoming a mainstay at historically underperforming and inner-city schools.

This academic year alone, more than 1,350 students in the Washington area are involved with a unique Model U.N. program called Global Classrooms DC, established by the United Nations Association of the National Capital Area (UNA-NCA). Of that number, 70 percent are enrolled in D.C. public and charter schools and receive specialized instruction and materials free of cost.

According to program director Jill Ruchala, what makes Global Classrooms special is that Model U.N. is incorporated into the schools year-round, with teachers receiving specific training and curriculum in addition to helping the students prepare to become mock U.N. delegates at the conference itself. 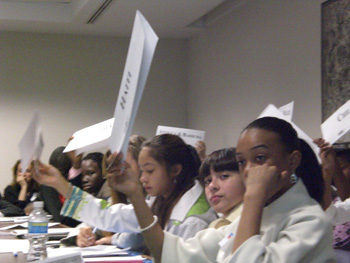 Model U.N. used to be an extracurricular activity in suburban — and by extension, often affluent — schools in select pockets of the nation. But today, D.C. is one of a rising number of metropolitan areas where Model U.N. is becoming a crucial learning tool at inner-city schools.

“We adopted this program in D.C. in 2003 to make Model U.N. more relevant to D.C. schools and to work with D.C. teachers so that the topics and committees really resonate with the population here,” Ruchala said. “Because of the large number of embassies and the government being here, it didn’t make sense not to capitalize on these factors.”

In some of the 31 high schools and middle schools involved locally, Model U.N. comes into play mostly as an after-school club activity, while other campuses set aside a day of the week for instruction as part of world history or geography classes. According to Ruchala, either way, UNA-NCA makes sure that the lessons align with D.C. public school standards so teachers are fulfilling requirements while explaining the inner workings of the United Nations or facilitating research on, say, the current situation in Afghanistan.

UNA-NCA also brings in expert guest speakers throughout the year to make the lessons stick. For example, during “U.N. week,” a representative from the Norwegian Embassy made an appearance at Roosevelt Senior High School in the District to give the students a taste of diplomatic life.

“This really boils down to connecting international communities for the students,” Ruchala noted.

Without a doubt, the most exciting aspect for students is the annual Model U.N. conference, which this year will include 700 of the 1,350 Global Classrooms participants. Students are split into pairs, with each duo representing a different country and researching a specific topic to bring solutions and debate to the table. Then, committees on May 5 will be held at the U.S. State Department, a longtime event partner, as well as the Pan American Health Organization’s office, which will be an exciting addition this year, according to event planners.

Volunteers from area universities with personal Model U.N. experience will also be involved in the conference, and policy experts will be on hand to help if students struggle in the discussions. Really, though, it’s an event that can be considered uniquely student-run. 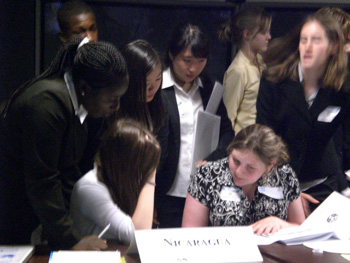 At the annual Model U.N. conference in Washington, D.C., on May 5, some 700 local students will assume the role of international diplomats in mock conferences at the U.S. State Department, a longtime event partner, and the Pan American Health Organization, a new addition this year.

“Student delegates, they’re the speakers. The proposed resolutions, what’s talked about in caucuses, how it’s talked about is decided by them,” Ruchala explained. “We’re not looking for them to sink or swim. Really the trainers and volunteers are there to make sure the conversation moves in a productive manner and that even if you have someone with a strong feeling, that everyone’s listening to one another.”

She’s also quick to point out that the conference — which will select winning delegates — is not the only objective of Global Classrooms DC. In the early portion of the school year, students are taught about the structure of the United Nations and given a more holistic view of global institutions and current world events. It won’t be until February when they get their specific assignments — country and topic — and conduct mini-simulated conferences and write position papers.

Ruchala says that topics are chosen by a special assemblage of teachers and professionals in diplomatic and foreign affairs. Sometimes particularly popular and universal issues stay in the fold, and there remains a goal of including at least one environmentally driven topic and one focused on women’s rights. Generally though, new subjects are brought in annually to address the main headlines of the day as well as what students care about.

For example, instructors in D.C. schools pointed out that some students recently began discussing their grandparents’ lack of access to medications and also pollution in local waterways. 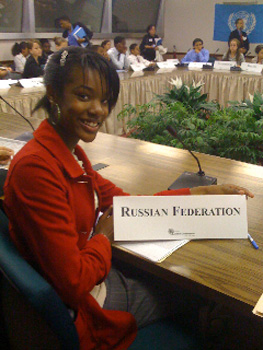 At Model U.N. conferences, students step into the shoes of ambassadors from U.N. member states to debate current issues on the organization’s agenda, voting on resolutions, giving speeches, negotiating with colleagues and moderating discussions just like they would at the world body in New York.

“That was a big reason why we chose access to medication and the clean water crisis as topics,” Ruchala said. “To pick something that they care about already and show that it has larger implications is exactly what we’re after.”

Once the Model U.N. conference is over, the advocacy work begins. Ruchala is developing partnerships with nonprofits and organizations that tackle some of these global problems so that students can use their newfound knowledge and act on it. That means for students who concentrated on HIV/AIDS, they’ll be connected with D.C.-area agencies assisting patients with the disease.

“We want to be there to facilitate these types of activities,” she says. “We don’t want them to do this great work and then just stop.”