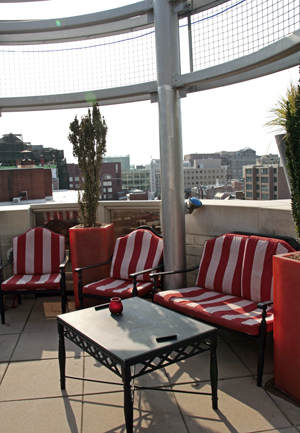 The Sky Bar rooftop lounge at the Beacon Hotel

Between the White House, Capitol Hill and the monuments on the National Mall, Washington, D.C., is considered one of the most awe-inspiring cities in the United States — not just politically but visually. Yet the view from the ground isn’t the only perspective in town.

So when sauntering past the giant marble memorial of Abe Lincoln or kayaking to the Jefferson Memorial gets old, there’s always another angle from which to appreciate the city’s monumental landscape: Check it out from above.

The District’s hotel rooftops offer some of the most breathtaking and picturesque views of the city — postcard-worthy and picture-perfect for visitors and locals alike. They’re all the more special because there’s really only a handful of places in the city that can be considered genuine rooftop destinations.

And that’s a shame. Because of Washington’s strict building codes limiting high-rise structures, many roofs offer stunning, unobstructed vistas of the entire city. But a few smart hotels in prime locations are well aware of this fact and have used it to their advantage.

The rooftops — like the character of the hotels in which they reside — range from classically elegant to the modernly chic. But they all share one thing in common: a stunning backdrop.

The W Hotel (515 15th St., NW), formerly the Hotel Washington, flaunts one of the most surreal views in D.C. — befitting the boutique brand’s flaunting personality. The lookout from its rooftop bar, called P.O.V. (short for Point of View), scans the city from 11 floors above the ground and brings the skyline into dramatic relief.

The year-round rooftop is broken into two parts: the outdoor terrace and indoor “ultralounge.” From the outdoor terrace — shielded by an awning above and currently surrounded by clear plastic tarp in the winters to trap warmth from space heaters — viewers can see the top of the White House (even the Secret Service officers stationed on that roof) less than a block away to the west over the railing. To the south, cars race down 15th Street, passing the wind-whipped American flags encircling the Washington Monument.

Both parts of the roof embody the same ultra-posh, ultra-fabulous style echoed throughout the hotel. Just as the lobby is decked out with chandeliers sparkling under apple red lights, the rooftop terrace and indoor bar features one-of-a-kind high-back chairs striped in black and white, fuzzy red davenports, silky cushions and even steel-framed daybeds. Aspen blankets also sit next to each table, compliments of the hotel, to keeps customers cozy — yet still stylish — in the winter or on a cool spring night.

Unfortunately, large parts of the outdoor terrace are closed off to parties who haven’t reserved a table, often relegating patrons to one section of the roof. On the flip side, part of the W allure is its sense of exclusivity — emphasized by the club-like lines of trendsetters just waiting to step foot onto the rooftop.

With its blend of over-the-top modern — and at times just plain over the top — décor, not surprisingly the W caters to 20- to 30-somethings. Here, pretty people mingle against a pretty background. At night, candles light the hotel and techno-inspired pop music softly bumps in the background. The bar inside the lounge glows in the dark.

Young women in heavy makeup, beaded necklaces and high-heeled boots chat with men in crisp suits and ties. Couples sitting on chocolate whicker loveseats sip on colorful — and costly — cocktails as they gaze out at the sun setting behind the Lincoln Memorial or watch planes coming into land at National Airport.

Marketing manager Kaitlyn Ferrara said the W celebrates the “art of the cocktail” and thinks of each drink as a performance.

And it’s a grand performance, leaving intoxicated customers wondering which are better: the crafty drinks or the amazing view? The strawberry lemonade mixes vodka with soda, lemon juice and fresh strawberries, chilled with square ice cubes in a tall cocktail glass. The St. Germain, a shake of Sauvignon Blanc, soda and lemon peel, is light and fruity, similar to a wine spritzer.

The food extenuates the upscale aura. The spicy salmon tartar appetizer spread on buttery garlic bread is well worth the $12. P.O.V. offers three types of personal pizza, the most popular lathered with truffle and Fontina cheese. Customers will acquire a newfound respect for cheeseburgers presented with W’s signature flair.

The prices might be high (the mini pizzas run from $12 to $21, cheeseburgers are $11, and cocktails start at $15), but customers pay for the atmosphere and presentation as much as anything else.

Still, for some old-fashioned Washingtonians, they may miss the days of the former Hotel Washington’s rooftop, the Sky Terrace, a far more casual watering hole without the long lines. Then again, the W is anything but an old-fashioned watering hole. In fact, the hotel has its own “signature ice program” for its all-natural libations. Even the ice here is cool.

Hay-Adams: King of the Hill

At the complete other end of the spectrum — though within close walking distance from the W — is a property that exudes historical character and refined elegance. Long known for its prime rooftop real estate, the Hay-Adams Hotel (16th and H Streets, NW) is a Lafayette Square landmark that sits smack-dab in front of the White House.

The rooftop of this 1920s Italian Renaissance-style building has for years been a popular venue for social functions, but even a classic needs updating every once in a while. So the Hay-Adams rooftop — now smartly dubbed Top of the Hay — reopened in February after undergoing multimillion-dollar renovations for more than six months.

The roof still looks down on the weaving redbrick paths of Lafayette Park. A block away are the president’s quarters and the Eisenhower Executive Office Building — and the rooftop offers an unobstructed view of both.

Standing on the outdoor terrace, which encircles the recent addition of an indoor space, guests can see the pinnacle of the Washington Monument reaching skyward. In the distance, the Jefferson Memorial peaks out from the horizon a little further to the right.

Whereas rooftop visitors may have been exposed to the elements previously, at times surrounded by a tent to block out the winter cold, Top of the Hay now offers 3,200 square feet of shelter in the form of trellis-like latticework under a canopy of skylights. Incidentally, there’s also a new state-of-the-art kitchen for direct catering.

Like the rest of the hotel, with its Elizabethan, Tutor and Italian accents, the new rooftop drips with elegance and regality. The soft cream-colored wallpaper is offset by gold flower-laden draperies that frame the floor-to-ceiling windows. A light green and brown square motif punctuates the chair cushions, mirroring the color palette of the carpet. A grand piano rests in the corner. Fresh flowers burst from the table centerpieces.

A bit tragically though, just as in the past, the coveted rooftop is not a public venue. Top of the Hay is only for hotel guests or for rental, though it is open to the public for special occasions.

Interested Washingtonians can attend the quarterly Hay-Adams Author Series, which invites historians, novelists and journalists to discuss their books over a three-course meal and wine. The discussions renew a tradition that began in the late 1800s when such notable authors as Mark Twain and Edith Wharton gathered at the homes of John Hay and Henry Adams (now the Hay-Adams). Tickets are $85 for the public. Employees are also brainstorming Easter and Mother’s Day brunches for Washingtonians (check the website at www.hayadams.com for more details at a later date).

Top of the Hay is divided into five interconnected sections that are available for event rentals. Hay-Adams Vice President and General Manager Hans Bruland expects businesses, nonprofit boards, and historical or political groups to use the space in the future for meetings or receptions. And given the gorgeous backdrop, he also predicts Top of the Hay will host more than a handful of weddings and rehearsal dinners very soon.

“We’re still learning the ropes and how we might use the new space, but there absolutely is no facility in the city with this magnitude and quality,” Bruland said.

Although employees wouldn’t disclose the cost of renting space in Top of the Hay — which accommodates up to 300 people — it’s undoubtedly a pretty penny considering suites at the Hay-Adams can go for more than $2,000 per night. But access to the top of Washington certainly doesn’t come for free.

In addition to the W and Hay-Adams rooftops, two other notable hotels have recently debuted rooftops that have become popular hotspots — whose popularity will no doubt soar this spring.

Employees are redesigning the space and plan to reopen the roof in early May or late April. Hector Torres, vice president of sales and marketing for Capital Hotels and Suites, which includes the Beacon and St. Gregory, said the Sky Bar will have new wall treatments, chairs, couches and decorations with a black-and-white color scheme and splashes of green. The lounge will also introduce AstroTurf artificial grass to give the place even more of an outdoor feel — topped with popsicles as a seasonal special.

Visitors can swim and order drinks from the bar or Asian cuisine from the hotel’s critically acclaimed restaurant, Zentan, starting in mid April or early May. The rooftop is traditionally open to the public for happy hours during the summer from 6 p.m. to 8 p.m. For a schedule of weekend summer pool parties, which has yet to be finalized, check out the Donovan House on Facebook and search ADC (Above DC).