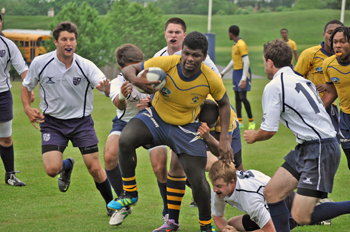 When you think of the stereotypical American high school jock, what comes to mind? It’s probably a beefy football player sporting a varsity jacket, less concerned with education than excelling on the gridiron. Or maybe a tall basketball star who has been recruited by the nation’s top university sports programs, lured by the promise of scholarships and stardom.

At the 2012 Collegiate Rugby Championship in Philadelphia, Pride Rugby won the high school division of the National Invitational Tournament, sweeping all five games.

Those may still exist, but for many area schools, traditional U.S. sports like football, baseball and basketball are being supplemented by teams and clubs that offer new athletic opportunities — many of them in sports that may have huge followings abroad but have until now remained on the fringes of American life.

And these “foreign” sports go far beyond the most obvious transplant: soccer, which — although not as popular on the professional level in the United States as it is around the world — is widely played by American schoolchildren (hence the cliché “soccer mom”).

Both in physical education programs and competitive sports leagues, area schools are expanding their athletic offerings and in the process redefining what it means to be a jock.

That may be no more evident than with the gentleman’s game rugby. First played in England in the 19th century, rugby remains one of the world’s most widely played sports — according to the International Rugby Board, it’s played in at least 100 countries across five continents. Over the last decade, the board says, rugby in the United States has exploded, jumping 350 percent since 2004 and becoming the third-fastest growing sport in the country.

The game has made inroads locally and now boasts a number of club and varsity teams at area high schools. Marcus Wood, a coordinator with Washington D.C. Youth Rugby (http://washingtondcyouthrugby.org), says that local high schools have sponsored rugby teams since the 1980s, but it has been over the last decade that more and more schools have adopted it as a varsity sport.

In 2008, he said, schools with existing teams founded the Metro Area Varsity Rugby Conference, which is made up of 11 private, public and public charter schools in the region. Alongside powerhouse private school teams like Washington’s Gonzaga and Bethesda’s Landon, the conference includes Calvin Coolidge Senior High School, a D.C. public school, and Perry Street Prep, a small public charter school in the city.

Perry Street, located in the Northeast neighborhood of Brookland, is home to Pride Rugby (www.priderugby.org), one of the region’s most storied rugby teams. It’s been profiled by the New York Times and CBS News, among various other outlets — both because of its on-field performance and because it stands as one of the first all-African American rugby teams in the country.

Started in 2000 by Tal Bayer, the school’s athletic director and a former rugby player himself, the team has grown from the original six to eight kids who warily eyed the sport to a high school team that today consists of between 40 and 45 players and regularly bests opponents who have played the game for much longer.

Bayer attributes the popularity of the sport to the camaraderie it engenders and the potential it allows for all players to participate. “I no longer have to sell it. The kids want to play it,” said Bayer. “I guarantee that every kid is going to play. Every kid, no matter the size, is going to run the ball. He’s not going to be sitting on the sideline — he’ll get to tackle like everyone else.” 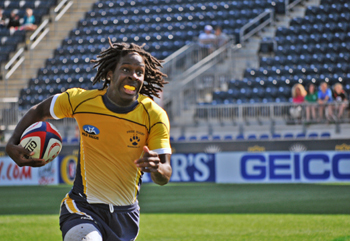 Perry Street Prep Public Charter School in D.C. is home to Pride Rugby, one of the region’s most storied rugby teams, both because of its on-field performance and because it stands as one of the first all-African American rugby teams in the United States.

Wood agrees. “Rugby has grown due in part to high school athletes who may not be as physically or genetically gifted, who desire to play a contact varsity sport. I myself was an unfulfilled high school football player who had an itch to scratch and rugby provided that opportunity. It was a perfect match. All players on a rugby team are expected to run, pass, tackle, carry the ball and even score. Rugby forces every player to get involved because supporting your teammate is key to ball retention and, eventually, winning the match,” he said.

Wood also noted that interest in rugby has surged since it was announced in 2008 that rugby sevens (in which teams are made up of seven players, instead of the usual 15, with shorter matches) will be included for the first time ever in the 2016 Summer Olympic Games in Rio de Janeiro.

The game’s international popularity is an invaluable opportunity for players, added Bayer, who said that this summer he sent his eighth- and ninth-grade students to a six-week training camp in New Zealand. “It’s an amazing opportunity for these kids to see a world beyond the city,” he said, noting that four of his players recently received USA National Team Trials invitations for December and if they make the squad, they will go to England in May and Argentina in June.

Likewise, rugby allows international teams to experience life in Washington. “On the flip side, when people come we often try to host them here as well, so they provide an opportunity to give a positive image of urban African American families. Unfortunately, for a lot of the internationals, their worldview is limited to what they see on TV and news, and unfortunately it’s not always a positive perspective. Our kids do a great job breaking down those stereotypes,” he said.

Perry Street Prep is hosting a team from South Africa this spring, and in November it will continue its longstanding relationship with the Embassy of New Zealand in Washington through the 16th Annual Ambassador’s Shield, a match pitting a combined U.S. services team against a squad from New Zealand. Local high school teams play as well, and since 2002, the event has also been used to raise funds — close to $125,000 — for Perry Street’s team.

With the success of schools like Gonzaga and Perry Street, rugby’s growth throughout the region’s schools seems assured in coming years. According to Clark Ray, the statewide athletics director for the Office of the State Superintendent of Education, D.C. may soon expand rugby to more public and public charter schools.

Other sports are also working their way into local schools, including another gentleman’s sport from England: cricket. Though played by millions across the planet, cricket remains on the fringes of American athletics — especially in schools. That is slowly changing, a product of the growth in immigrant populations from India and Pakistan.

Last year, the U.S. Youth Cricket Association, which is based outside of Baltimore, Md., and the Washington Warriors Cricket Club visited dozens of schools in Maryland and Virginia to sell educators on the merits of the sport. 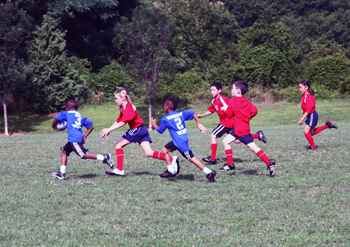 Children of all ages and athletic ability can play in the Washington D.C. Youth Rugby Warriors, founded in 2004.

Youthful cricketers have plenty of mentors to look up to locally and resources to draw upon. There are two leagues with 30 teams each in the Washington metro region, and the Youth Cricket Association has handed out 500 cricket sets to school in Maryland and more to schools in Virginia. A member of the 2011 U.S. national under-19 cricket team is himself a local — Waleed Karimullah graduated from Virginia’s Annandale High School in 2011.

Schools in the region have also toyed with fencing, badminton — the Badminton Club of DC used to play at St. Albans School — skiing and even bowling. Earlier this year, 17 D.C. public schools introduced bowling as a varsity sport for girls, hoping to move the school system toward better compliance with a federal law that requires gender equity in federally funded institutions. All told, some 50 bowlers participated.

New sports and activities aren’t only limited to after-school teams, though, as more schools incorporate nontraditional sports into their physical education curricula. In one example, two years ago D.C. public schools reintroduced archery, which is now provided at 15 schools through the National Archery in the Schools Program. Other students are taking fly fishing, playing ultimate Frisbee or clambering up rock-climbing walls.

The point, says Heather Holaday, a health and physical education program manager with D.C. Public Schools, is to offer students a new slate of activities that they can excel at — instead of be excluded from. “We’re looking to introduce more lifetime activities in the physical education program,” she said. “We’re looking for new ways to motivate students to be physically active.”