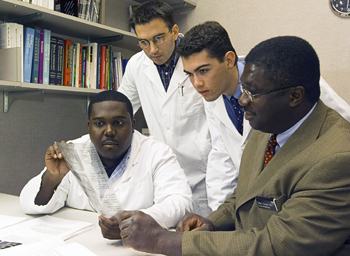 Imagine this: You are a survivor of thyroid cancer. A year, or two, or five later, your doctor tells you that the cancer has returned and invaded the lymph nodes in your neck.

You are told that you have two options. You can undergo a course of radioactive iodine therapy, which may require hospitalization and will definitely leave you giving off radiation for some time after treatment — meaning you’ll need to be isolated from friends and family for a period of time and will have to take other precautions, like washing your linens separately from everyone else in the house. You may also experience other side effects, such as nausea, headaches, dry mouth and impairment of your fertility.

For 20 years, doctors at Mayo Clinic, which has an expansive research program, have been performing a little-known treatment for thyroid cancer called alcohol ablation that can eliminate the need for invasive surgery or radiation therapy.

If that doesn’t work, you will need to have surgery to have the affected lymph nodes removed altogether — delicate surgery near the important veins of your neck, like the carotid and jugular. On the other hand, you could have surgery first and then the radioactive iodine treatment.

Now imagine that you’ve learned about a third option: Guided by ultrasound, a doctor injects a solution of 95 percent ethanol alcohol into your neck. The alcohol acts to cut off the blood supply to the cancerous cells in the lymph nodes of your neck, and they ultimately die. You’re not hospitalized. You do not undergo surgery. You go home the next day, with nothing more than a sore neck to remind you of the procedure.

I know which procedure I’d pick, given the option. And so did Penny Mills, the executive vice president and CEO of the American Society for Addiction Medicine (ASAM), who faced just such a choice in early 2012 after learning that the papillary thyroid cancer she thought she’d beaten some three years earlier had returned and invaded at least two lymph nodes in her neck.

“My endocrinologist told me I had two options: radioactive iodine first or surgery first,” recalls Mills. “Then I went to the surgeon, who said he’d need to operate. I just didn’t want to go through that again.”

Mills had already had a thyroidectomy, neck dissection and radioactive iodine treatment during her initial bout with thyroid cancer. She spent that night researching her options online, particularly on the ThyCa website run by the Thyroid Cancer Survivors’ Association. It was there that she first learned about alcohol ablation as a treatment for recurrent thyroid cancer. The next day, her endocrinologist called her and said, “There’s one other option I hadn’t told you about…”

He strongly recommended that Mills go to the Mayo Clinic in Rochester, Minnesota, where the procedure had been pioneered by Drs. Ian Hay and J. William Charboneau. Hay thought Mills would be a good candidate for alcohol ablation, and soon she was undergoing the procedure. “I received two treatments that were provided by an interventional radiologist. The procedure is very similar to an ultrasound-guided biopsy. Other than a sore neck, there was no other complication and I could take a plane home the afternoon of the second treatment!” she said.

Mills was lucky, of course: Alcohol ablation isn’t for everyone. Hay recommends it only for those patients with recurrent thyroid cancer that’s limited to five or fewer lymph nodes. And there’s always a chance that the cancer won’t respond and the procedure will need to be repeated. But when Mills returned in June to check her nodes (after her treatment in February), both the size of the affected nodes and the blood flow to them had decreased. She’ll return to see Hay in November.

This isn’t a new procedure: Hay and his colleagues at Mayo have been performing it for some 20 years. In the Journal of Clinical Endocrinology and Metabolism in September 2011, he reported on a case series of 14 patients treated between 1993 and 2000. All of the nodes treated with alcohol ablation decreased significantly in volume — from a mean of 492 millimeters per cubic meter to a mean of 20 millimeters per cubic meter after two years. In 12 of the 14 patients, the ablation successfully controlled all known metastatic disease; the other two patients developed further metastases at around two years after ablation and had successful surgical treatment.

It’s being done at the Mayo Clinic, not a fly-by-night burgers, fries and thyroid cancer treatment drive-in. It has very few side effects (hoarseness and neck soreness chief among them), and is an alternative to more significant procedures. Yes, it’s not suitable for everyone, but what cancer treatment is?

And yet, as far as I can tell, the Mayo Clinic is the only major institution that offers alcohol ablation. Online thyroid cancer support groups make mention of doctors at M.D. Anderson Cancer Center in Houston and Columbia University Medical Center in New York that might offer alcohol ablation, but when contacted, the doctors at these institutions say they don’t provide the procedure and shy away from talking about it.

Why? Perhaps someone who reads this column will have more information. Penny Mills is equally baffled. “It just blows me away that it’s not being used more,” she said. “On the thyroid cancer support forums, people talk about recurrent disease and having to go through radiation again and again. There is an alternative! It may not work for everyone, but even if only some people could take advantage of this option, shouldn’t it be more available?”