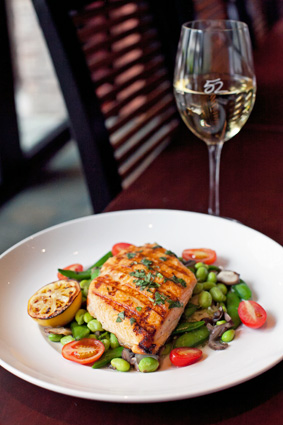 Seasons 52, a Florida-based chain noted for its fresh and healthy cuisine, opened its 17th restaurant — and the first located in the Washington area — last month, just in time for the “quick let’s get fit for the summer” season that’s suddenly upon us. After months of being wrapped in heavy sweaters and stoking the fires with rich, heavy comfort food to stave off the cold, appetites turn to lighter fare. And Seasons is the perfect place to feed that need while staying fit.

As the name suggests, Seasons has a menu that is reworked four times a year to reflect seasonal availability, while adding new dishes weekly to capture ingredients at their peak of flavor and quality — inspired by the fresh appeal of farmer’s markets that generally last 52 weeks a year (hence the second reference in the name). The Seasons 52 concept, which originated in Orlando in 2003 with the opening of the first Seasons, pairs the trend of seasonal-based freshness with the growing desire to eat well while still feeling well about it.

Seasons 52 claims that no dish on the menu has more than 475 calories. While that may sound like a lot for a single dish, consider that the average burrito from Chipotle weighs in at more than 1,000 calories. The fact that Seasons 52 does not use butter might make some diners a bit apprehensive that taste might be sacrificed for pant size. But Seasons 52 uses equipment, including wood-oven grilling and brick-oven roasting, that doesn’t require added fats for cooking, along with techniques such as caramelizing vegetables to enhance their natural flavors without packing on extra calories. Another obvious way to hold down calories is to limit portion size, but Seasons doesn’t take the easy way out here. The portions are of a reasonable size for the average appetite (though perhaps not for teenage boys) and because the dishes are so flavorful, they’re satisfying.

Flatbread is a good example. One of Seasons’ signature dishes, this first cousin to pizza and foccia (albeit a skinny first cousin) comes in the form of a long, rectangle, almost paper-thin crust bread topped with a delicious array of equally paper-thin ingredients. The combinations are inventive and inviting: steak and cremini mushrooms with fresh spinach and Wisconsin blue cheese; Maryland crab with onions; roasted red pepper and mustard sauce; spicy chipotle shrimp with grilled pineapple; feta cheese and roasted poblano peppers; and garlic chicken with balsamic onions, roasted red peppers and mozzarella cheese. The balance of these almost cracker-like dishes is ideal, so neither component overwhelms the other. The only caveat is that they should be eaten quickly as, being so thin, they have a tendency to dry out.

Some of the dishes achieve their calorie counts by tipping the balance in favor of the vegetables, such as the tiger shrimp penne pasta and market vegetables sautéed in a lemon-basil sauce with parmesan cheese. Other vegetable-heavy items include the chicken citron with golden beets, broccoli and wild rice, as well as the cedar-plank roasted salmon with whole-roasted sweet carrots and fresh asparagus — all deliciously virtuous. Some dishes are inherently lower on the calorie front, such as the grilled rainbow trout served with spring new potatoes and roasted vegetables, and the grilled turkey tenderloin skewer that is partnered with vegetable pearl pasta, haricots verts and dressed in a rich tamarind glaze. Broiled lemon, rather than butter, rounds out the flavor profile on many of the dishes.

You might think that with all the emphasis on health and calories that Seasons might forgo the challenge of offering sweets. Not so. Seasons 52 pioneered the “mini indulgences” dessert concept, creating small versions of classics, as well as a few innovations of its own, in custom-made double shot-size glasses. Diners can choose from old-fashioned favorites such as key lime or pecan pie, carrot cake or lemon pound cake. For chocolate lovers there is a dense chocolate peanut butter mousse, a rocky road version made with Belgian chocolate, and the sublime mocha macchiato that channels tiramisu but turns left at the ladyfingers in a concession to health. 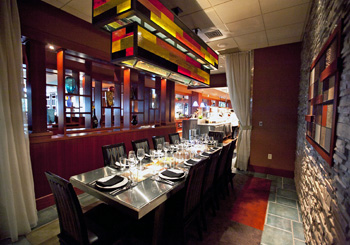 Seasonal favorites also come and go, such as strawberry shortcake in the spring, with blueberry cheesecake and a miniature pumpkin pie on tap this summer and double gingersnap crust in the fall. Served in a sampling rack with nine spaces, diners can choose from a preset sampling of each dessert flavor, or can customize the tray to their own tastes. The minis are priced by the piece so it’s easy to get as little or as much as you want, and because each dish is small, it’s possible to try several kinds without too much stress on the waistline or budget.

Seasons 52 is most noted for two features: its healthy approach to fine dining and its wine program, which has won numerous accolades, including Wine Spectator’s 2009 and 2010 Awards of Excellence. Under the direction of George Miliotes, who is the 152nd “master sommelier” in the world, Seasons 52 offers an eclectic collection of more than 100 wines at a range of price points that will appeal to even the most exacting palate. Miliotes has a passion for uncovering a good value, and travels extensively to locate new labels that offer both the high quality and relatively low cost to mirror the rest of the menu.

Frank Lloyd Wright-inspired architecture combines with a design mix of earth tones, rich woods, exposed stone, modernist fabrics and art glass to create an environment that is both aesthetically appealing and warmly inviting. Murals of dried spices behind glass are a colorful preamble to the dishes to come. The large bar encompasses an area for a piano, and during the evenings live music permeates the whole dining space as a sort of background filler in the larger design scheme.

Season 52’s location is also a brilliant bit of marking. Located between an LA Fitness and Whole Foods in the new North Bethesda Market on Rockville Pike across the street from White Flint Mall, it’s got a ready-made customer base. Even weeknights, the 310-seat restaurant was often quite full. And with the crowd comes the noise. Seasons can be a bit loud when more than half full, though not bothersomely so.

Seasons 52 adds another important dimension to its concept: price consciousness. Originators wanted to create a restaurant that offers fresh, healthy food that’s also affordable. They have succeeded surprisingly well, with most entrées staying under $20. This may be one of the most compelling things about Seasons 52. The food has the creativity and the quality of a high-end restaurant, and the ambiance to match, but it’s affordable enough to dine there on more than just a special occasion. Seasons promotes itself as a “casually sophisticated restaurant serving fresh, great tasting food at a good value,” and in one of the rare cases of truth in advertising, the description is spot on.