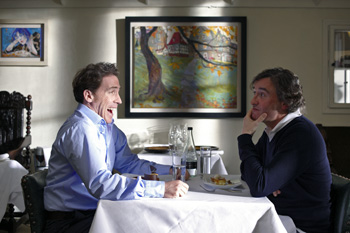 Rob Brydon, left, and Steve Coogan embark on a hilarious road trip together where they spar over friendship, life, work and comedic improvisation as only best friends can in Michael Winterbottom’s “The Trip.”

At the U.S. premiere of “The Trip,” during the 2011 Tribeca Film Festival, British director Michael Winterbottom’s hilarious film was a favorite of both audiences and critics. One of the most versatile of directors (“The Shock Doctrine,” “A Mighty Heart,” “Code 46,” “Welcome to Sarajevo”), Winterbottom conquers yet another genre, the road movie. The comedy successfully reunites him with actors Steve Coogan and Rob Brydon (both in “Tristram Shandy” and “24 Hour Party People”), who once again emit amazing chemistry together, this time portraying a modern-day bromance.

Coogan basically acts as himself, or a particularly self-centered version of that persona, on a plum assignment from “The Observer.” He’s all set to eat his way through top restaurants on a pleasant vacation in the beautiful pastoral settings of northern England’s Lake District and Yorkshire Dales, accompanied by his beautiful girlfriend Mischa (Margo Stilley of “9 Songs”). When she bails on him, he calls upon his best friend Rob (Brydon, also more or less playing himself), for whom he shares equal feelings of love and frustration.

Steve and Rob continually spar with each other, attempting to outdo each other in improvised comedic sketches, including impersonations of actors like Michael Caine, Sean Connery and Woody Allen. They continuously argue over whose Michael Caine is better and debate on friendship, life, work,and endless more rumination as only the best of friends can. When not bickering with Rob or sleeping with innkeepers, Steve struggles against a weak cell phone signal to keep in touch with Mischa, his child from a former marriage and his agents in London and America. Though Rob certainly has a more stable — and fulfilling — personal life with a loving wife and child that he misses, he himself has some angst that drives the story.

Wait, did I say story? Like “Seinfeld,” “The Trip” is about nothing. What makes it work is that super casual nature in which anything could happen. The special flavor of humor is distinctively British, tart, and unexpectedly coming from all over the place. Coogan and Brydon are achingly funny, especially together. As usual, Winterbottom cooks up something much more special than the raw ingredients of a common road trip flick. Since the movie is edited from a six-episode BBC series also called “The Trip,” perhaps we’re seeing the very best of scenes.

The documentary “L’Amour Fou,” which made its U.S. premiere at the 2011 Tribeca Film Festival, provides a respectful yet revealing look at the life of the late fashion designer Yves Saint-Laurent. The opening footage comes from Saint-Laurent’s emotionally candid retirement speech in 2002, referring to well-publicized partying and drug use over an epic career lasting more than a half century, including four decades heading his eponymous fashion label. That followed the fashion prodigy’s stunning rise to prominence as the head designer for the House of Dior at the tender age of 21. For his entire adult life, YSL was a larger-than-life figure capturing the public’s attention.

“L’Amour Fou” assumes the audience knows all that. First-time French director Pierre Thoretton takes a more personal look at the fashion icon by utilizing the framework of the 2009 auction of art collected by Saint-Laurent and Pierre Bergé, his long-time partner (in business and in love), during their four decades together. The priceless collection includes works by Picasso, Matisse, Mondrian, Brancusi, Modigliani, Braque, Warhol, Leger and more. The filmmaker, himself a visual artist, takes the viewers on intimate tours of three of the couple’s magnificent houses in Paris, Normandy and Marrakesh — in a pseudo documentary form à la “Summer Hours” by Olivier Assayas.

We see that the same kind of obsession that compelled Saint-Laurent to create innovative works of fashion also compelled him to collect masterpieces of art. In that sense, each place and object provides a representation of a particular aspect of Saint-Laurent’s extravagant life. Archival footage includes the art in the presence of celebrity friends like Andy Warhol, Mick Jagger and Catherine Deneuve. Bergé basically serves as a tour guide, delivering most of the talking on screen. He remains coy about why he’s selling the art, though he admits Saint-Laurent would have kept the collection together if he was still alive.

Bergé intersperses his comments with frank reflections on his relationship with Saint-Laurent and the designer’s creations. Bergé refers to Saint-Laurent’s bouts of manic depression, driving him to workaholic frenzies at times while leaving him incapable of caring for himself at others. The various pieces — of words and images — presented in “L’Amour Fou” add up to a mosaic providing a modestly intimate glimpse of Saint-Laurent’s private life, long hidden behind the curtains showing only his oversaturated public persona.

“Submarine,” adapted by British writer-director Richard Ayoade from the lauded novel by Joe Dunthorne, adds a distinctly British hero to the cinematic pantheon of overambitious eccentric youth typified in Hollywood coming-of-age movies like “Ferris Bueller’s Day Off” and “Rushmore.” The humor and acting are more droll but just as eccentric. The look and feel of the mid to late 1980s are also authentically evoked, though the themes are universal. 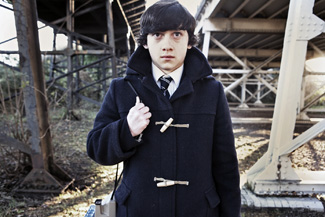 Like many teenage boys, precocious 15-year-old Oliver Tate (Craig Roberts) strives to have sex by his 16th birthday. The leading object of his affections is Jordana Bevan (Yasmin Paige), an energetic lass who’s a self-proclaimed pyromaniac. A tough cookie, she takes advantage of her dominant role in the relationship by bossing him around, including editing his journal entries about her. Alas, she’s understandably distracted from their budding love affair by her mother’s brain tumor.

Oliver’s equally important, if more noble, goal is to prevent his parents’ marriage from falling apart. He’s worried that in seven months, his parents haven’t dimmed their bedroom lights, previously a telltale sign they were having sex. Concerned his mother Jill (Sally Hawkins) is having extramarital relations with New Age guru Graham Purvis (Paddy Considine), an old flame, Oliver spies on them. Meanwhile, he tries to keep his father, Lloyd (Noah Taylor), from falling even deeper into depression, a malady that might afflict young Oliver himself.

“Submarine” benefits from uniformly strong performances by its talented ensemble cast. Hawkins and Taylor get a chance to display their acting chops as the troubled parents. Considine takes his campy performance over the top as Graham the guru. Certainly, most credit goes to Roberts and Paige for exuding a palpable connection together with a sympathetic blend of young eagerness and confusion as our erstwhile teenage hero and heroine.

Ayoade’s ambitious feature debut, after a successful career in television, aims high and generally hits the mark. His direction uses all sorts of highly visible techniques — like a kaleidoscope sequence as Oliver rides a bike and an artificially aged old footage montage. Though sometimes they seem a bit forced, these stylistic flourishes usually work well enough. The pleasantly nostalgic result recalls the free-spirited nature of the early Nouvelle Vague, notably François Truffaut’s “The 400 Blows,” itself an iconic coming-of-age tale.


On June 5, at the Artisphere in Arlington, Va., more than 400 student filmmakers (ages 7 to 18) from 26 states and 14 countries will vie for the Shortie Awards, including best animation short, live action short film and daily news program. A project of MHz Networks, the festival recognizes original short film productions created by student filmmakers and their teachers. The Shortie Awards 10th anniversary will be complemented by a conference. “ShortieCon” includes two days of workshops on topics such as “Final Cut Pro: Editing for Elementary,” “Documentary in a Day: Media-Making in Your Classroom” and “Exploring through Television Production Short Filmmaking in the Classroom.”


“In Praise of Independents: The Flaherty” (June 4) offers highlights from the 56th year of the Flaherty seminar on independent filmmaking with “non-preconception.” “American Originals Now: Kevin Jerome Everson” (June 5, 25) shares the acclaimed director’s cinematic explorations of the history of African Americans and people of African descent. “Color, Scope: Recent Restorations from the 1950s” (June 12-18) reviews what audiences saw for the first time in widescreen. “All for All: Collaborative Channeling with Nam June Paik” (June 12, 2 p.m.) presents three collaged single-channel works by the Korean-born “father of video art” and partners.