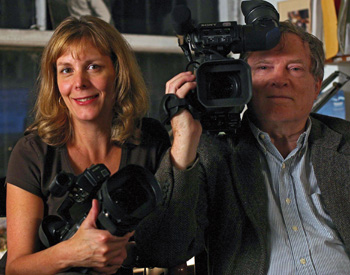 The AFI-Discovery Channel Silverdocs Documentary Festival, perhaps the nation’s leading documentary film festival, returns June 20 to 26 at the AFI Silver Theatre in Silver Spring, Md., and other venues around the Washington area.

Veteran documentarians Chris Hegedus, left, and Donn Alan Pennebaker will be honored this year at the Charles Guggenheim Symposium of the AFI-Discovery Channel Silverdocs Documentary Festival, now in its ninth year.

Now in its ninth year, the festival has been called “non-fiction nirvana” by Variety magazine and spans seven days of film screenings — including 14 Oscar-nominated flicks — that represent more than 60 nations and attract some 27,000 viewers each year.

A defining highlight of the festival is the Charles Guggenheim Symposium, which this year will honor veteran documentarians Chris Hegedus and Donn Alan (D.A.) Pennebaker. The June 23 program will present selected clips, followed by a discussion of their work.

“With a collective body of work spanning over 50 years, Hegedus and Pennebaker have influenced a generation of filmmakers in direct cinema,” said Sky Sitney, festival director. “Whether it be Bill Clinton’s first presidential campaign, the three-day 1967 Monterey Pop Festival, an intimate portrait of Bob Dylan or a behind-the-scenes view of dot-com mania, they have captured some of the most important subjects and iconic figures of our time.”

Other conference highlights include panels on topics such as the relationship between journalism and documentary filmmaking, as well as workshops with advice on distribution, pitches and public funding, a “digital bootcamp,” and a master class focusing on directing with Rachel Grady and Heidi Ewing (“Boys of Baraka,” “Jesus Camp,” “12th and Delaware”).

There’s even a daily happy hour talk show, “Silverdocs Tonight,” when host AJ Schnack will interview filmmakers, film subjects, and talk more about the featured documentaries and their day at Silverdocs.