Home The Washington Diplomat May 2011 Singapore, Finland Offer Lessons With Their Emphasis on Educators 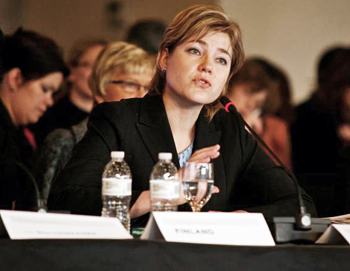 Education is not only about learning — it’s about the teachers who make learning possible. Education has also always been something of a competitive pursuit, with rankings and scores showing how school districts, college campuses and even entire nations stack up on a relative scale.

Earlier this spring, mixing international camaraderie and competition-driven improvement, nations came together to learn from one another’s education systems — and specifically, how different countries treat the teachers who form the backbone of those systems.

A representative from Finland talks at the International Summit on the Teaching Profession, organized in part by the Organization for Economic Cooperation and Development.

In mid-March, the U.S. Department of Education, the Organization for Economic Cooperation and Development (OECD), along with various other groups joined together to put on the first-ever International Summit on the Teaching Profession.

Organizers hope the two-day event, held in New York City, becomes a jumping-off point for the United States to learn from some of the highest-performing nations in educating their citizens — and the world-class teachers behind that performance. Attendees spoke at length about what it takes to recruit and retain quality teacher workforces and emphasized that educators are the key to achieving knowledge and, consequently, higher test scores — by extension, producing students who are better able to compete in a globalized world.

U.S. Secretary of Education Arne Duncan, in a release about the event, touted the extraordinary opportunity for the United States to “broaden our perspective on how to effectively recruit and support teachers.”

“This is an area where we need to move forward with a sense of urgency because building a strong teaching force is critical to having a successful education system,” he said.

Two countries featured prominently both before and during the high-profile event were Singapore and Finland, whose strengths lie in their focus on teachers and the teaching profession as a whole.

In the latest 2009 Program for International Student Assessment conducted by the OECD — which tests 15-year-old students across the globe in math, science and reading — Singapore and Finland scored at the top for all three categories, while Shanghai, China, dominated the rankings. (South Korea, where teachers are often viewed as “nation builders,” also consistently scored at the top alongside Singapore and Finland.) The United States, in stark contrast, fell near the middle of the pack, placing 14th in reading, 17th in science and a below-average 25th in math.

The biggest difference between these leading countries and the rest of the pack, according to experts, is the elevated status of teachers in their societal frameworks. Compared to the United States, educators from these foreign nations earn more money, receive more training, and are handpicked to serve in the classroom because of their superior intellect and talent. As a result, teaching is a deeply respected profession in these societies.

For example, Finland, in recent years held up as a standard bearer by education observers, sent a delegation of officials to the conference in New York City, where they talked about the rich talent pool from which the country draws its quality teaching force.

Only one out of every 10 applicants makes it into the training pool to become a teacher in Finland. This elite selection process in turn feeds the tremendous respect and regard held for educators, all of whom must hold master’s degrees.

In a report drafted prior to the summit, Andreas Schleicher, a senior OECD officer, and Dr. Steven L. Paine, vice president of strategic planning and development at McGraw-Hill Research Foundation, point out that it’s practically a national calling to be a teacher. “In Finland, it is a tremendous honor to be a teacher, and teachers are afforded a status comparable to what doctors, lawyers and other highly regarded professionals enjoy in the U.S.,” they write.

Despite the rigorous selection process, Finland has been lauded for its flexible, creative approach to teaching, including less homework and fewer school hours than in the United States, as detailed in the recent Time magazine article “Finland’s Educational Success? The Anti-Tiger Mother Approach.”

Although the Asian education model is often viewed as one of the strictest and most disciplined around, it has one critical element in common with the Scandinavian approach that accounts for both successes: the overwhelming focus on teachers. 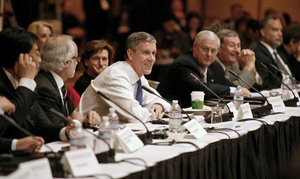 U.S. Secretary of Education Arne Duncan said that one of the main goals of the International Summit on the Teaching Profession was for the United States to “broaden our perspective on how to effectively recruit and support teachers.”

And interestingly, whereas in Finland teachers are vigorously vetted and the majority of applicants aren’t able to crack into the profession, Singapore — though also rigorously selective — seems to nurture and encourage its teaching hopefuls every step of the way.

In the prosperous city-state, young people in the top third of their secondary schools’ graduating classes are recruited to become teachers. In their report, Schleicher and Paine noted that the government offers these prized pupils a monthly stipend while they’re still in school that is competitive with the monthly salary for graduates in other strong fields. In exchange for accepting the compensation, the students must commit to teaching for at least three years after graduating.

A similar method is employed for identifying Singapore principals. According to Schleicher and Paine, exceptional teachers each year are located and separated out as potential school leaders who will undergo extensive interviews and exercises.

“Approximately 35 candidates a year are then chosen from among the initial pool for six months of executive leadership training,” their report said. “This process is comprehensive and intensive, including an international study trip and a project on school innovation.”

For those teachers who remain educators instead of the principal track, training and professional development is not only available, it’s actively encouraged. Singapore provides teachers with an entitlement of up to 100 hours of training per year to keep up with the latest strategies and trends. Along with development, teachers are evaluated annually, with positive reviews entitling them to bonuses of 10 percent to 30 percent of their base salary.

Ambassador of Singapore Chan Heng Chee told The Washington Diplomat that her country’s educational system recognizes that students have different aptitudes, interests and learning styles, and “we cater to these differences,” along the way providing ample financial and academic support to those who need it.

“Singapore is a country without natural resources,” Chan said of her island of 5 million people. “We believe our people are our best natural asset. We believe in educating every person to his or her best potential. Over the years, we have grown the national belief which everyone embraces, that if you have a good education, all doors are open to you, and you can have the career you want. This myth taps our Asian culture which values education in and of itself as an enabler.”

The ambassador noted that the United States and Singapore have had a longstanding memorandum of understanding based on sharing best educational practices. Given the success of the summit, the hope is to continue this sharing arrangement and bolster it further.

“Looking forward, we can do more in teacher development and school leadership,” she said. “We can always enlarge the scope. For instance, the Ministry of Education has been working with American institutions renowned for their outreach programs in the life sciences. Our teachers do science attachment programs and our students attend the International Science and Engineering Fair and the Research Science Institute program of MIT.

“We have fostered a few university alliances,” Chan added. “The latest is the announcement by National University of Singapore and Yale University which will establish a Yale-NUS College in 2013. The Singapore University of Technology and Design also signed an agreement with MIT to develop new curricula and research projects.”

S. Iswaran, Singapore’s senior minister of state for education, echoed the need for collaboration and cooperation in his remarks during the closing session of the international teaching summit, where he stressed to Duncan and other nations’ representatives the value of leadership when it comes to education and, particularly, emulating his country’s impressive results.

“A lot of the ideas we’ve discussed are excellent ones. But without good leadership, coupled with the quality teacher workforce, it will be irrelevant,” he said. “Education is a process that needs time. Therefore the leaders must have the gumption and temerity to allow sufficient time for change to have its effect to be able to assess it.”

Summit organizers are expected to post an updated report on the lessons learned from the event and then outline next steps.