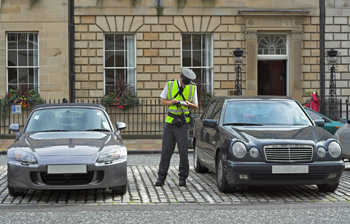 Finding a place to park in New York, London, D.C. and many other big cities around the world where diplomats live and work can be a chore. In some places, diplomats have gained notoriety for parking illegally and failing to pay their tickets. Officials in New York and London, in particular, have improved compliance by naming and shaming offenders and cracking down on scofflaws.

Eight years ago, Raymond Fisman and Edward Miguel, professors from Columbia University and the University of California in Berkeley, published a paper about the connection between corruption and diplomatic parking tickets that included a list of parking violations and staffing levels to find the countries with the most violations in New York on a per-diplomat basis. They found a strong correlation between corruption and parking tickets, with the worst offenders — Kuwait (246 violations per diplomat), Egypt (139), Chad (124), Sudan (119), Bulgaria (117), Mozambique (110) and Albania (85) — hailing from countries that score poorly on Transparency International’s Corruption Perceptions Index and other corruption indicators. (Their data is from 1997 to 2002.)

The concept of diplomatic immunity has always been somewhat controversial, but nothing seems to rile people up more than diplomats who think they can park wherever they want — and not pay parking tickets.

Fisman and Miguel didn’t examine unpaid parking ticket violations in D.C., but data from 1970 to 2011 compiled by WTOP/WJLA indicate that diplomats in the capital accrued 7,611 tickets that went unpaid, with a host of notoriously corrupt countries on the list of top offenders, including Russia, Yemen, Cameroon and Mauritania. (France was the outlier in fourth place, and a single French diplomat also managed to accrue $6,200 in unpaid parking tickets alone in 1998 in Wellington, New Zealand.) The D.C. fines totaled $340,000 (excluding late fees), which pales in comparison to the $18 million in fines that diplomats racked up from 150,000 unpaid parking tickets in New York from 1997 to 2002, according to Fisman and Miguel’s study.

The economists also found that countries where public opinion of the United States was low had more unpaid violations, though violations briefly went down after the Sept. 11, 2001, terrorist attacks even among those countries. Responding to public outrage over diplomatic parking scofflaws, New York cracked down in 2002 with the Clinton-Schumer Amendment, which created tough penalties for unpaid violations, including towing vehicles with diplomatic plates, refusing to renew the plates of serial offenders and deducting 110 percent of unpaid fines from U.S. government aid. (One of the self-appointed ringleaders of that initiative, the now disgraced former Congressman Anthony Weiner, was found to have more than $2,000 in unpaid parking tickets in 2011 himself.)

The measure has dramatically reduced new infractions in New York but a recent story in The Wall Street Journal revealed that officials there have been unsuccessful in securing more than $16 million worth of unpaid diplomatic tickets accrued prior to the 2002 crackdown. Egypt ($1,970,580), Nigeria ($894,625) and Indonesia ($738,700) led the way in unpaid fines.

Including both unpaid parking tickets and congestion charges, the United States was the top offender in 2013, with more than £8 million in unpaid debt. All but about £1,000 of that was in unpaid congestion charges, which the State Department believes diplomatic personnel should not have to pay. Japan, Russia, Nigeria, Germany and India, which also apparently believe their accredited diplomats shouldn’t have to pay the congestion fee, are right behind the United States. In looking at the missions in London with the most unpaid parking fines (excluding congestion fees, there were 5,662 unpaid tickets accrued by London diplomats in 2013), all of the worst offenders — Nigeria, Saudi Arabia, Zambia, Ivory Coast, Uzbekistan and Liberia — are countries where corruption is a well-documented problem.

Diplomats have immunity but they are also ambassadors tasked with fostering a positive image of their country while abroad. And they are expected to abide by a country’s rules, even if they are technically immune from them. Flagrant violations like murder often grab headlines, but day-to-day offenses, like illegal parking, are just as likely to irk officials and citizens.

On the other hand, many diplomats believe that host cities, especially those like New York, where parking is scarce, have a responsibility to provide adequate parking for diplomats. Do diplomats from some countries have a strong sense of entitlement that causes them to flout the law? And is there a correlation between corruption, or even how meritocratic the selection process is for the diplomatic corps in a given country, and how those diplomats drive and park?

Professor Fisman, co-author of the diplomatic parking study, said that the diplomats who flout parking laws aren’t necessarily reflective of the average citizen in their countries.

“But it is a statement about the types of people who end up serving their governments,” he said, noting that in some countries, diplomatic posts may be given as patronage to powerful businesspeople who, especially in the developing world, may have a strong sense of entitlement.

Fisman’s study found clear differences in the way diplomats from different countries acted, even though they all enjoyed the same level of diplomatic immunity. “[P]arking violations should be high across the board for all diplomats when enforcement is lifted. Instead we find that diplomats from low-corruption countries (e.g., Norway) behave remarkably well even in situations where they can get away with violations, while those from high-corruption countries (e.g., Nigeria) commit many violations, suggesting that they bring the social norms or corruption culture of their home country with them to New York City,” the report said.

John Campbell, former U.S. ambassador to Nigeria from 2004 to 2007, doesn’t agree with that conclusion. The former American diplomat, now a fellow at the Council on Foreign Relations, served as the State Department’s director of the Office of U.N. Political Affairs in the 1990s, and even at that time, he and his colleagues debated what to do about diplomatic parking scofflaws. Campbell said that although the list of scofflaws has remained pretty consistent throughout the years, he doesn’t necessarily buy the link between corruption and unpaid parking tickets.

“What is corruption in one country isn’t necessarily corruption in another,” he said. “I would suggest that the problem is very much the product of local circumstances and the culture of the country involved.”

James Greene, a retired American diplomat who served in Latin America, Europe and Africa, admits that he had a sense of entitlement as a diplomat but became more “humbled” once he realized that a chief of mission could revoke his immunity if he behaved like a “knucklehead.” He thinks there may be a cultural explanation for why the same countries tend to show up on the violator lists.

“My guess is that diplomats from developing countries are greater abusers of diplomatic immunity because they can get away with so much questionable behavior in their own country, so they act somewhat similarly when away from home,” he said.

Ambassador Campbell said the key question isn’t why the problem exists, but what can be done about it. He said that parking is also a huge issue at the U.N. Mission in Geneva.

“The Swiss were quite clever when I was in Geneva,” he recalled. “They would bundle parking and road offenses and send them to the chiefs of mission once a month. That was quite clever because the last thing I would have wanted was a parking infraction coming to the attention of my ambassador, so I would immediately pay it.”

At least one envoy tried to find a way around the Swiss system, but he got caught. According to a New York Times story from 1997 — which asserted that cities such as Paris and Rome were more lax in dealing with diplomatic parking scofflaws than New York — the United Nations chief of protocol in Geneva, Mehmet Ulkumen of Turkey, was “suspended for six weeks in 1994 after ‘problems relating to traffic violations.’ He had instructed Geneva officials to send him all traffic tickets issued to United Nations personnel each month, and he simply removed all those that had his name on them.”

And according to a 2012 story in the Swiss press, of the 2,588 traffic violation notices issued to foreign diplomats in Bern in 2011, only 215, or 8 percent, were paid, so apparently the Swiss still don’t have a foolproof way of ensuring parking compliance from diplomats. Neither does Australia, but in the wake of some high-publicity cases of reckless and drunk driving and escalating unpaid parking tickets accrued by diplomats in Canberra, the country’s Department of Foreign Affairs and Trade recently told the Canberra Times that it didn’t believe that diplomatic immunity applied to most parking or speeding incidents.

“The department finds it difficult to accept the view that traffic infringements, including parking and speeding infringements, can be regarded as occurring in the course of the performance of official duties, even in the most exceptional circumstances,” the department said.

Campbell said that if any of the American diplomats serving under him when he was a chief of mission weren’t paying tickets accumulated during their off-duty hours, as opposed to when they were on official business and thus entitled to diplomatic immunity, he would immediately send them home. But he maintains that the issue isn’t a matter of simply asking the chiefs of mission from each of the offending countries to crack down on their subordinates.

Some countries, like Germany, used to track diplomatic parking violations but no longer do. According to a 2007 article in Der Spiegel, diplomats in the former West German capital of Bonn accrued some 16,000 tickets in 1995 alone — and the city even published a “name and shame” list of the worst offenders — but officials in Berlin don’t count diplomatic tickets these days.

If one buys into the notion that elites are more likely to flout parking laws than ordinary people, it’s worth noting that the relative affluence of diplomats can very greatly from one country to another. Diplomats from most Western countries — save for a small minority of well-connected political appointees — generally tend to have salaries that put them in the middle class or upper middle class of their home countries. But in many developing countries, diplomats are part of the 1 percent both in terms of income and prestige.

That dynamic may or may not impact their parking habits, but it’s also worth noting that some diplomats from poor countries who are posted to rich ones find their salaries to be completely inadequate to survive in pricey cities like Paris, London or New York. And so, diplomats from those countries might be less likely to be able to pay their parking tickets, even if they wanted to.

This argument, however, certainly wouldn’t apply to some of the countries that routinely show up on scofflaw lists, like Saudi Arabia, whose diplomats have the most unpaid parking fines this year in Canberra, Australia, while their colleagues were the second-worst offenders in London in 2013.

Fisman said he wanted to research whether the relative prestige level of diplomats was a factor in their parking habits, but he couldn’t find a way to quantify the issue.

Whatever the reason why some diplomats feel like they can park wherever they want, the bottom line is that it doesn’t sit well with Americans.

“We are a high legal compliance society — people obey the rules here,” said Fisman. “And so of course it bothers us when people don’t obey the rules. It runs contrary to our norms.”