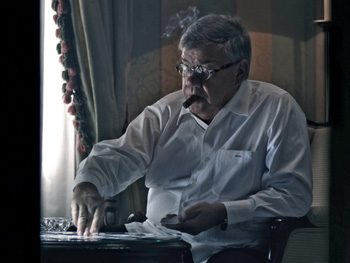 Also See: ‘E=Team’ and ‘The Blue Room‘ and Repertory Notes

Little-known French-Algerian businessman Jean-Yves Ollivier is the focus of a new documentary, “Plot for Peace,” that examines his critical role in helping to end apartheid in South Africa.

French professor of African history and journalist Stephen Smith wrote the script of “Plot for Peace,” building the tale based on historical events. An unassuming, overweight figure wearing ill-fitting clothes, Ollivier would seem an unlikely candidate to change the course of history. In the 1980s, Ollivier gained riches trading commodities in South Africa, defying international sanctions against the apartheid regime.

Having grown up in Algeria in its final stage as a French colony, Ollivier decided to hasten what he felt to be apartheid’s eventual demise. Although some interviewees question the businessman’s motives and accuse him of being a spy, Ollivier dismisses such allegations and says he simply wanted to avoid the ouster of the white community from South Africa when its system of segregation inevitably collapsed (his own family was kicked out of Algeria when it gained independence).

While he became French Prime Minister Jacques Chirac’s adviser for African affairs, Ollivier largely acted independently, leveraging his extensive political and business connections to broker backroom deals between countries that had been hostile to one another. A pivotal success was a complex 1987 hostage exchange involving stakeholders from South Africa, Angola, Mozambique, Cuba, France and the Netherlands — a deal that led to the 1988 withdrawal of South African and Cuban troops from Angola. The domino effect of easing the Cold War proxy battles enveloping South Africa and its bordering Marxist neighbors set the stage for peace, enabling the end of apartheid.

Remarkable archival footage complements the interviews to display what was actually happening at the time. Despite a plethora of talking heads and historical film clips, “Plot for Peace” moves with the fast pacing of a Hollywood thriller. Agulló’s brisk editing is no surprise given his background as an editor of narrative films, including action flicks. 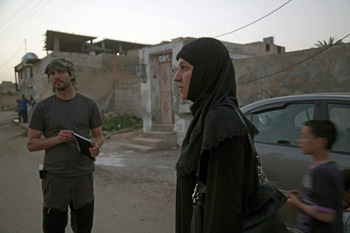 “E-Team” goes to the front lines of some of the world’s most dangerous hotspots to document the work of Human Rights Watch.

Acclaimed documentary filmmakers Katy Chevigny (Emmy winner as executive producer of “P.O.V.: Good Fortune”) and Ross Kauffman (Oscar winner as director of “Born Into Brothels: Calcutta’s Red Light Kids”) team up to direct and produce “E-Team,” a stirring portrait of intrepid Emergency Team members sent by Human Rights Watch into war zones to investigate human rights violations and war crimes. Like a mystery thriller, the film maintains a feeling of tension often lacking in nonfiction cinema. It also gains an elevated sense of immediacy because the audience knows that what they are seeing on screen is real.

“E-Team” focuses on four team members, starting with Russian Anna Neistat and Norwegian Ole Solvang, a wife and husband living in Paris with her 12-year-old son, who are also partners professionally. The couple, along with the filmmakers, sneak across the Turkish border into Syria in 2013. When the Syrian government drop cluster bombs on a Syrian village in 2013, they interview survivors hiding in an apartment building while the microphone records ongoing earth-shaking explosions.

Meanwhile, during the last days of Col. Muammar Gaddafi’s autocratic rule of Libya in 2011, weapons specialist Peter Bouckaert — dubbed “Big Bang” by Rolling Stone magazine — and E-Team founder Fred Abrahams collaborate in Libya. The pair document the atrocities committed by Gaddafi’s troops, including eyewitness accounts of the living and the remains of the dead.

Toward the end of the film, Abrahams is shown testifying against Slobodan Milosevic, the former Serbian president charged with committing war crimes in the 1990s, at the International Criminal Tribunal for the former Yugoslavia in the early 2000s. Abrahams’s testimony at the trial demonstrates the end game following the dangerous work undertaken by the E-Team investigators.

Chevigny and Kauffman eschew depending on staged studio interviews — a traditional but often mundane documentary technique — to tell their story. Instead, the filmmakers risk their own livelihoods in bringing their crew and cameras to the front lines. Co-directors of photography Kauffman and Rachel Beth Anderson capture vivid live-action footage of events happening in real time, winning the Documentary Cinematography Award at the 2014 Sundance Film Festival, where “E-Team” made its world premiere. David Teague’s precise editing of those images complement Chevigny and Kauffman’s striking cinéma vérité direction.

The theatrical release of “E-Team” at the West End Cinema coincides with the film’s simultaneous opening on Netflix online. 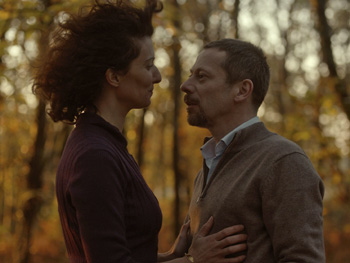 Lauded French actor Mathieu Amalric (“The Grand Budapest Hotel,” “The Diving Bell and the Butterfly,” “Quantum of Solace”) makes his mark behind the camera with the intellectual thriller “The Blue Room,” which recently made its American premiere at the New York Film Festival. At the film’s world premiere at the Cannes Film Festival, Amalric’s fourth directorial feature was noted for its brevity, only a third or half of the lengthy running times of some of his esteemed colleagues’ hefty films at Cannes.

In only 76 minutes, Amalric’s film packs a lot of bang for the buck, avoiding the pitfall that befalls many features that might have been good if they had not dragged on far too long. Amalric’s efficient direction keeps the story moving with a steady dose of energy without getting too overheated. Within the claustrophobic environment of the film’s tale and characters, skilled director of photography Christophe Beaucarne’s restrained cinematography captures a plethora of visual clues enhancing the mise-en-scène and story line.

In a provincial French town, meek Julien Gahyden (Amalric) shares family life with his wife Delphine (Léa Drucker) and daughter Suzanne (Mona Jaffart). He makes a living hawking farm equipment, not exactly the world’s most glamorous profession. To get some excitement, he’s been having an affair with Esther Despierre (Cléau), the resident femme fatale who is cheating on her husband, a local pharmacist.

After a regular Thursday afternoon romp in the sack in a hotel’s blue room, a reference to the film’s title, Esther pointedly queries Julien what he would do if she were no longer tied down by her marriage. Off screen, some disturbing act takes place, leading investigating magistrate Diem (Laurent Poitrenaux) to question Julien and eventually Esther.

As always, Amalric’s performance is top-notch, illustrating his character’s neuroticism and growing sensation of feeling trapped. The adulterous lovers’ palpable chemistry is no doubt enhanced by Amalric’s off-screen relationship with Cléau, who more than holds her own playing against Amalric.

The 19th annual Arabian Sights Film Festival returns to D.C., showcasing top new Arab cinema at the Embassy of France, the Goethe-Institut and AMC Mazza Gallerie. Highlights include the North American premieres of “Abd El Kader” (Algeria) and “Ghadi” (Lebanon); the U.S. premieres of “Certified Halal” (Algeria/France) and “The Proof” (Algeria/France); and the East Coast premiere of “Giraffada” (France, Germany, Italy, Palestine). On Fri., Nov. 7, the Embassy of France hosts a wine reception (8:05 p.m.) in between screenings of “The Proof” (6:30 p.m.) and “Rock the Casbah” (8:45 p.m.). The closing-night screening at AMC Mazza Gallerie of “Certified Halal” (Sun., Nov. 9, 6:30 p.m.) precedes a closing party.

The retrospective “Also Like Life: The Films of Hou Hsiao-hsien,” honoring the Taiwanese auteur, was produced in association with the Ministry of Culture of the Republic of China, the Taipei Cultural Center, the Taiwan Film Institute and the Center for Moving Image Arts at Bard College. The series opens at the Freer Gallery of Art (Nov. 2-Dec. 21) with the Taiwanese master’s “Dust in the Wind” (Sun., Nov. 2, 2 p.m.) and “The Green, Green Grass of Home” (Sun., Nov. 2, 3:30 p.m.). Additional screenings take place at the AFI Silver Theatre (Nov. 15-21) and the Goethe-Institut (Dec. 4-13), the latter’s films programmed by the National Gallery of Art.

In collaboration with the embassy’s Italian Cultural Institute, the AFI Silver Theatre (Nov. 1-26) and the National Gallery of Art (Nov. 1-Dec. 27) present the retrospective “Morality and Beauty: Marco Bellocchio,” which looks back at the late Italian filmmaker’s body of work critiquing politics and social institutions. The NGA series screens at the National Portrait Gallery’s McEvoy Auditorium, opening with Bellocchio’s signature “Fists in the Pocket” (Sun., Nov. 1, 4:30 p.m.).

Commemorating the Velvet Revolution’s 25th anniversary, the series “The Play’s the Thing: Václav Havel, Art and Politics” (Nov. 7-16) looks back at locations and individuals in the life of the noted playwright, political activist and first president of the Czech Republic. The films screen at the American University’s Malsi Doyle and Michael Forman Theater in the McKinley Building, presented with appreciation to the Embassy of the Czech Republic, Václav Havel Library and the National Film Archive Prague.

The “Robert Wise Centennial” retrospective (through Nov. 30) commemorates the 100th anniversary of the late American director’s birth, including the British psychological horror movie “The Haunting” (Nov. 16-20).

The event series “The Wall in Our Heads – Arts – Civil Society and Walls: American Perspectives” (through Dec. 15) continues with German filmmaker Nico Raschick discussing his documentary about East German hip-hop, “Here We Come” (Mon., Nov. 3, 6:30 p.m.); co-director Andreas Voigt talking about “Leipzig in the Fall” (Tue., Nov. 4, 6:30 p.m.); and art historian and curator Eckhart Gillen presenting the independent film and video art program “Works by Artists Wolf Vostell and Lutz Dammbeck” (Mon., Nov. 10, 6:30 p.m.). In partnership with the Goethe-Institut Korea and the Korean Cultural Center in D.C., the “Korean Program” (Mon., Nov. 17, 6:30 p.m.) offers films and talks about artists and the arts facilitating relations. Sponsored by the Europen Union Delegation to the U.S., the “Faces of Eastern Europe” program (Mon., Nov. 24, 6:30 p.m.) includes shorts from the 13 newest European Union members who have joined since 2004, curated by the International Short Film Festival Oberhausen.