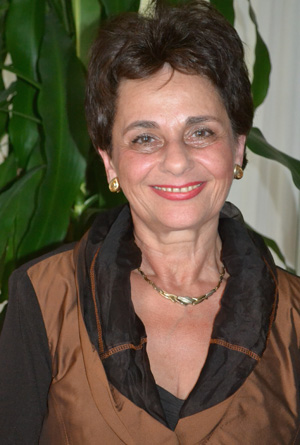 “It’s like a dream,” said Mihaela Buga, wife of Romanian Ambassador Iulian Buga. “Twenty-five years ago we weren’t even allowed to travel to East Germany,” and now, “we are in the most powerful city in the world…. We are very happy, very lucky and very privileged to be here.”

The Bugas, who have one daughter, first served in the United States in the 1990s, when he was a counselor in the Romanian Embassy in D.C. and then consul general in Los Angeles. After that, Iulian Buga become director of the North America Division in the Ministry of Foreign Affairs back home, followed by stints as ambassador to the Netherlands and permanent representative to the Organization for the Prohibition of Chemical Weapons; state secretary for political and strategic affairs; and Romania’s ambassador to Ireland. Ambassador Buga and his wife returned to Washington late last year. He joined the diplomatic corps in 1991, two years after Romania’s violent revolution and the execution of longtime dictator Nicolae Ceausescu, who had ruled the country since 1965.

Living under the brutal communist leader, “I did feel like it was an Iron Curtain. I was so eager to see the world,” Mihaela Buga recalled. “For intellectuals, it was worse — the lack of a book, a movie, the theater, everything. You felt suffocated. You could get over the lack of food, buy it on the black market, but our intellectual aspirations were more and more suppressed.

“We had cosmopolitan friends who had left earlier to settle in Germany and Israel and we visited them, but the first few years after the revolution it was hard to travel for financial reasons. My husband won a scholarship for a master’s degree at Westminster University in London and I visited him twice.”

Buga said she and her husband, who worked as a scientific researcher in Bucharest in the 1980s, felt popular discontent with the communist regime and “we knew that something must give but we didn’t expect anything that fast. It was such a total change — 180 degrees,” she said of the 1989 revolution that ushered in democracy. “I can’t even contemplate what our lives would be like if the communist regime had been allowed to carry on.”

But it wasn’t, and while Romania remains poorer than some of its Eastern European neighbors — and was hit hard by the 2008 global recession — it is now considered an upper middle-income country by the World Bank, with a per-capita GDP of $18,000. It also joined the European Union in 2007 and NATO in 2004, cementing its turn away from its former Soviet overlords.

“It is a huge relief to become NATO members. NATO and EU memberships are the best things that could happen to Romania and they give us steps toward democracy,” Buga said. “It sounds like a cliché, but it’s true.”

In a recent poll, “a huge majority of Romanians – 80 percent – have a very high regard for the United States,“ she added. “Americans should go visit Romania. They will be warmly welcomed. Romanians will be so enthusiastic and hospitable. Romania is just as beautiful as the U.S, even if it is much smaller.”

Romania, in fact, has capitalized on its varied natural landscape and its place in folklore mythology to develop a thriving tourist industry. That includes the historical region of Transylvania in the central part of the country, home to the Carpathian mountain range and the inspiration behind Bram Stoker’s novel “Dracula.”

Buga said one of her favorite places to visit in Romania is the Apuseni Mountains in Transylvania. “There is a national park in the area and many natural caves and striking limestone formations and pristine, traditional villages,” she said.

She also thinks it is “amusing” how Americans associate Dracula with Transylvania. The character Dracula was supposedly inspired by Vlad the Impaler, who ruled in the mid-1400s and whose reputation for cruelty has endured for centuries, although he remains a folk hero for some Romanians for staving off an Ottoman invasion. Vlad is the subject of a new Hollywood film “Dracula Untold,” one of many adaptations of Stoker’s legendary vampire tale.

Today, another famous person has brought renewed attention to Transylvania. Charles, Prince of Wales, owns several properties in Transylvania, the most famous of which is a traditional Saxon house located in Viscri village.

“Prince Charles sponsored a documentary about Transylvania and is known for being very friendly and is very much loved by the villagers,” Buga told us. “Transylvania is stunningly beautiful [with] mountains and canyons and gorges that are incredible. It’s a caver’s paradise and there’s an awesome glacier cave, Scarisoara, which I love.”

During breaks back home in Romania, Buga always found jobs in advertising for the Romanian National TV and public relations for the national telecommunications company. “We were mostly self-taught; it was the beginning of advertising in Romania,” she said. “It would only be for two years or so until we left again so that was hard. For me, a real career was not possible.”

Mihaela Buga poses with her husband, Romanian Ambassador Iulian Buga, and their daughter at her Oxford Law graduation in 2011.

But Buga said she has enjoyed experiencing the United States and seized on the opportunity to travel the country after her husband was first posted here in the 1990s.

“After the revolution, we very much wanted to travel, especially to the West — the forbidden fruit of the past. I’ll never forget that first trip to America in 1994. It was like being in a trance. We flew on Tarom Airlines from Bucharest to New York. We were met and taken to a midtown hotel where we stayed for a few days. It was the beginning of December and … there were colored lights on the Empire State Building, and the rest of Manhattan seemed to be on fire. It was surreal. We didn’t need sleep or food. We just walked around Manhattan as much as we could,” Buga remembered.

Washington, D.C., didn’t make as dramatic an impression on her. “However, it has grown on me and if I had to choose, I’d rather live here now. Washington is cleaner, greener and more livable even though it is the center of power. New York now makes me a bit claustrophobic. Here you can live at the edge of the forest and still be close to the center of the city.”

She takes advantage of the city’s sights and natural attractions from their 30th Street residence, tucked off Massachusetts Avenue. “I like to take long walks. I walk down to the Natural History or the Air and Space Museum and then I walk home. I think the Holocaust Museum is haunting. It has a lesson for everybody; what human nature can come to. There are many Holocaust museums all over the world but this one is down to earth. It is really striking.

“It’s fascinating to live here in the center of the world and see the places and meet the people you know from TV,” she added.

“My only very friendly criticism about the U.S. is the food and what many Americans choose to eat,” said Buga, a vegetarian. “I have no meat in the house. I cannot praise enough [first lady] Michelle Obama’s campaign for healthy eating in the schools. I am no ‘foodie’; I like plain food.”

During their first posting, the couple lived on New Hampshire Avenue in Dupont Circle. “Our daughter Irina went to Hyde-Addison Elementary in Georgetown.” Today, Irina is an Oxford graduate and a lawyer who is finishing her Ph.D. in Amsterdam, where she will soon become an associate in an international arbitration firm.

“When she comes to town she runs straight to Adams Morgan for clubbing and entertainment,” said her mom. Irina often travels with her boyfriend Mike Bloemenotijn, who joined her and her parents over the summer for a cross-country driving trip.

“First we went to New Orleans. I loved it and so did everyone else. It’s a fascinating atmosphere; the city never sleeps,” Buga said. “Then we drove to New Mexico, Arizona, Utah and Colorado. It was a huge adventure. We went to the national parks. They gave you a sense of freedom without prior reservations in this fast, awesome country. This summer we’re thinking of the Florida Keys and Puerto Rico or a cruise to Alaska. A trip around Romania will follow.”

As much as she loves to travel and live abroad, Buga said she hates not being able to have pets and having to constantly pack up and say goodbye. “It gets harder and harder. I’m not getting any younger. I leave with my heart broken. On a lighter note, it’s also hard to pack and unpack. You see how much you shopped during your stay,” she said.

“Saying goodbye is still hard even in this global world where you never really have to say goodbye for good,” she added. “When you leave your country, saying goodbye to parents is always difficult. They are not getting any younger. There is no match to being there in person, no matter how often you call. You feel guilty; it’s a burden.”