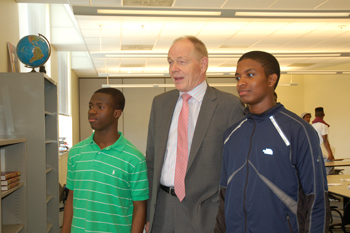 A country being admitted into the European Union is similar to what would transpire if D.C. succeeded in becoming a U.S. state, Gideon Sanders observed from the sidelines of his history class.

Students mostly nodded, seeming to grasp the connection, ready to keep going in the lesson.

Finnish Ambassador Pekka Lintu talks to students at McKinley Technology High School as part of a growing annual tradition whereby ambassadors and diplomats from the European Union member states go into D.C. area classrooms to share knowledge and insights about their homelands.

“You’d have a shift in the number of representatives, and for the European Union, the makeup of Parliament would be affected,” Sanders explained from his third-floor classroom at McKinley Technology High School in the District.

Then, the teacher handed the floor back to the unique guest instructor for that period.

“Your teacher’s right. That’s a good comparison,” said Pekka Lintu, ambassador of Finland, “except that foreign policy and security are big considerations as well when you’re talking about nations.”

Lintu was on hand as part of a growing annual tradition whereby ambassadors and diplomats from the European Union member states step into D.C. area classrooms to share knowledge and insight about their homelands to high school students. The effort coincides with Europe Day, the anniversary of the EU’s creation in 1950, and runs for several weeks between late April and early June.

This year, mostly during the first week of May, representatives from all 27 EU member countries in Washington took their turns at schools in the District and surrounding suburbs. A number of embassies even sent more than one guest.

In the case of McKinley, the Finnish ambassador was specially requested by Sanders, who spent years living in Finland and still speaks the language. Before entering the education field, Sanders studied at John Hopkins University’s School of Advanced International Studies and worked in the diplomacy sphere, nearly taking a job with the State Department. Before doing so, though, he realized that his true calling was teaching youth. That’s why, he says, any opportunity to bring international culture and knowledge to his history students is something he won’t pass up.

“I want to expose the kids to as much as possible,” he told The Diplomat, explaining that students regularly study current events during his course and connect what’s happening locally to what’s happening globally. 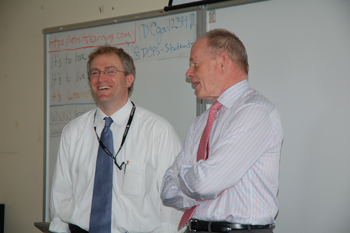 Prior to Lintu’s arrival, students in Sanders’s class, as well as other history classes, boned up on European history so that they could ask thoughtful questions of the ambassador about such topics as future EU enlargement and past imperialistic tendencies.

To start things off, Lintu gave some sense of his homeland, telling the high schoolers that Finland has the population of Maryland and the sprawling landmass of Montana. Creating a European Union, he told them, was done to stabilize the continent, given that even before the two world wars, “every 30, 60 years there was a major war.”

“Now you can say that Europe is whole and free,” he said. “Former enemies united in such a way that to make war between them in the future would be unthinkable, absurd.”

Lintu’s 50-minute presentation carried on more like a conversation, with a map of Europe positioned on a screen in the background. The ambassador held onto notes but barely used them as he went through facts about Europe and Finland. Students were free to raise their hands and stop him with questions throughout the discussion, and Lintu adjusted his topic to their request. At one point, when a student asked about currency, the ambassador pointed out with obvious pride that there are more euros in circulation than there are U.S. dollars. 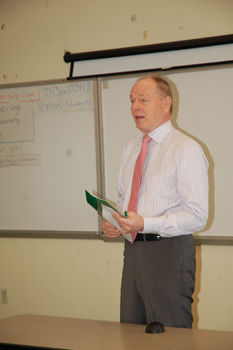 According to the EU Embassy in D.C., which organizes the classroom sessions with staffers and ambassadors, the idea was proposed six years ago based on a similar concept in EU headquarters back in Europe. Sandra Auman, cultural affairs officer in Washington, has since organized the communications between D.C. schools and EU embassies, each year sending off newsletters and information to teachers and department heads about the opportunity. When the schools express interest and list off their embassy preferences, she sets the wheels in motion to be a matchmaker of sorts. Some embassies have a hand in selecting the schools they visit, like the Italian Embassy, for instance, which seems to prefer campuses with Italian language programs.

Of the nearly 40 schools involved, a majority are public. But more efforts are being extended each year to reach out to private, charter and magnet schools so that a wide variety of students will have access to the ambassadors.

The European Delegation also helps other cities like Atlanta and Boston duplicate the program by having EU consul-generals visit the schools.

In Sanders’s eyes, the diplomatic guest teachers provide classes with more insight than research or textbooks ever could. The D.C. educator points out, “You can make anything international and still be able to hit the curriculum.”