Home The Washington Diplomat September 2010 From Harlem to Hungary 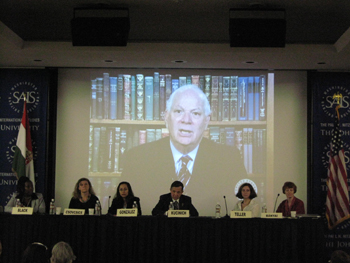 Geoffrey Canada is absolutely synonymous with Harlem. Besides being a native son of the New York City neighborhood, the tall, well-spoken man has been at the helm of the Harlem Children’s Zone for two decades, working tirelessly to educate and improve the lots of Harlem youth through his increasingly well-known nonprofit.

Sen. Benjamin L. Cardin (D-Md.) gives a video message before a panel that includes Rep. Dennis J. Kucinich (D-Ohio), center, and education officials from the United States and Hungary as part of the two-day conference “Changing the Odds Beyond the Border: Adapting the Harlem Children’s Zone Model in Hungary,” held the Johns Hopkins University’s School of Advanced International Studies this summer.

Canada has been featured on the “Oprah Winfrey Show,” seen on Pepsi commercials to raise dollars for the Harlem educational initiative, and even schmoozed it up with the likes of Stephen Colbert for his TV show on Comedy Central.

His latest pursuit, though, takes him well out of the familiar turf of the Big Apple.

Earlier this summer, Canada spent several days in D.C. at a meeting of the minds of sorts to determine whether the educational approach pioneered by the Harlem Children’s Zone could be successfully translated to — of all places — Hungary.

Although there have been strides to expand the Harlem Children’s Zone to other areas of the United States, bringing it to Hungary would be a huge coup, taking Canada’s homegrown approach international.

Béla Szombati, Hungary’s ambassador in Washington, was instrumental in setting the wheels in motion after learning more about what was being tried in Harlem. The Hungarian Embassy teamed up with the D.C.-based Woodrow Wilson International Center for Scholars and Johns Hopkins University’s School of Advanced International Studies (SAIS) for the two-day conference earlier this summer titled “Changing the Odds Beyond the Border: Adapting the Harlem Children’s Zone Model in Hungary.” The event — held at SAIS — brought together academics from Hungary and the United States along with government officials and other interested professionals.

The conference centered on the parallels between the longstanding struggles that young African Americans have encountered in U.S. cities and the plight of the Roma in Hungary, a minority group that also faces poverty and discrimination, although more so in rural than in urban areas. A variety of discussions examined prospects for using the Harlem Children’s Zone as a model to better integrate Roma youth into Hungarian society.

The success of Harlem Children’s Zone deserves special attention, U.S. Secretary of State Hillary Clinton said in a recorded video message to kick off the conference, saying that the program “has strengthened families, empowered youth and fostered a spirit of achievement among thousands of children” — in addition to overcoming “legacies of intolerance.”

In his opening remarks, Michael Posner, assistant secretary at the State Department, stressed that the inequities in Hungary also call for creative solutions. “It’s a situation that Europeans cannot afford, both economically and morally,” he said. 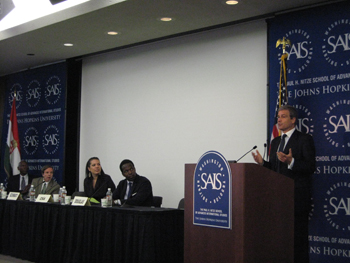 Hungarian Ambassador Béla Szombati speaks at a conference examining how the Harlem Children’s Zone might be translated to the Hungarian education system to better serve the country’s disenfranchised Roma population. The Hungarian Embassy teamed up the Woodrow Wilson International Center for Scholars and Johns Hopkins University to organize the conference, whose program, left, featured artwork by children from a multicultural Roma-Hungarian school.

“I found it fascinating. It looks at the issue of inclusion in a comprehensive way and really focuses on education at an early age,” Ambassador Szombati said of the Harlem Children’s Zone. “Hopefully everyone will remain as interested as they have been.”

Given the seemingly endless number education reform efforts out there, what makes the Harlem Children’s Zone (HCZ) stand out as one to be replicated?

For starters, the catchphrase for the project gives a sense of its scope: “whatever it takes” from cradle to career. Unlike more standard early education programs, HCZ not only begins early, the wraparound services continue up all the way through college graduation. Among the free services offered to families are parenting classes, obesity workshops and pre-kindergarten instruction.

“You’re vulnerable at every age so we have to support them through that entire transition until they are able to support themselves with jobs,” Canada said. “In the end, this is not about feeling good; it’s about working or not working. We run a no-excuse culture.”

The goal of the program, Canada pointed out, is to create a new generation of leaders in the community by making significant investments in children, starting at birth.

Since its own birth, the group has experienced incredible growth. HCZ has its origins in the 1970s in the form of a truancy prevention program in Harlem. More than 20 years later, funding came through in 1997 for a pilot project, the Children’s Zone, that led the way for the full menu of educational initiatives that HCZ now offers. The Harlem Children’s Zone Project, which currently encompasses almost 100 blocks, is a unique, holistic approach to rebuilding a community so that children can stay on track through college and go on to the job market. Today, HCZ serves upward of 10,000 children and more than 7,400 adults, with an impressive budget of $75 million for 2010.

According to Canada, to truly make a difference in the community, the key is to reach enough people to make a dent. His underlying goal is to recreate for the children of Harlem “what middle class children take for granted.” That means a sense of neighborhood and unconditional adult support in addition to rigorous academic study.

Along the way, Canada has attracted many high-profile fans. Renowned philanthropist George Soros was one of his first big donors. As a native Hungarian, Soros is also supportive of the idea of replicating the program in his native land.

“I’m a great admirer of HCZ,” he said during a taped statement played at the conference. “It has truly broken the cycle of generational poverty. Hungary needs a comprehensive approach including family support, after-school programs, and it should address desegregation.”

What makes the Harlem Children’s Zone work, according to keynote speaker Margaret Spencer of the University of Chicago, is the project’s comprehensive and determined approach to help poor children make it to college. This means a combination of finding creative ways around modern-day challenges, along with recognizing the historical causes of race-based poverty and identifying risk factors in the population.

Secretary of State Clinton, too, voiced support for HCZ and Canada’s efforts, saying that “as a New Yorker, I have seen the benefits firsthand…. It’s strengthened families, empowered our youth and fostered a spirit of achievement.”

In the eyes of Hungarian representatives looking to adopt HCZ, the program offers important insights into how to address the entrenched discrimination often inflicted on the country’s Roma population.

Posner of the State Department told attendees that people of Roma descent are forced to live on the “margins” of society, often unable to enroll in advanced education. They also face extreme prejudice when it comes to housing and health care, making it difficult to lift themselves out of poverty.

“A new right-of-center government just formed in Hungary and they’re determined to put an end to these problems,” said Rita Izsák, designated deputy state secretary for Roma affairs in Hungary. “I hope the implementation of HCZ in Hungary will turn out to be a real best practice,” she added. “As our youth become more educated, they can contribute to the national budget, become productive members of society instead of beneficiaries of public aid.”

Following the D.C. gathering, the hope is for Hungarian officials to visit Harlem and see Canada’s efforts in person later this year. From there, workshops and training will likely follow to prepare for a pilot project in Hungary.

“It is rare to see U.S. social policy being exported,” noted U.S. Rep. Dennis Kucinich (D-Ohio), introducing the final panel on the second day of the conference, which addressed the steps that would be involved to set up an endeavor like HCZ. These include creating a board and recruiting a strong management team, as well as articulating a powerful concept and clear vision.

Canada said the HCZ model can be replicated in other cultures and countries, but it’s essential to involve all the players on the ground, providing children with “all the benefits their parents lacked.” For it to succeed, he concluded, “You need community buy-in.” And so far at least, it certainly looks like his Hungarian counterparts are buying into the idea.