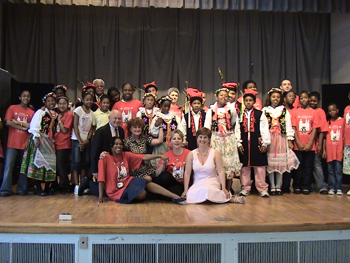 For 40 Years, WPAS and Embassies Team Up to Embrace D.C. Schools

Describing the range of subjects covered in the Embassy Adoption Program as expansive wouldn’t even begin to cover it.

Wearing native Polish attire, students from D.C. Public Schools capped off their participation in the Washington Performing Arts Society’s (WPAS) Embassy Adoption Program with a traditional Polish performance in front of staff at the Polish Embassy.

District students paired with France, for example, are exposed to science and technology, “in addition to,” Carol Bogash says with both a pause and a chuckle, “well, croissants.”

Bogash is director of education for the Washington Performing Arts Society (WPAS), which will celebrate its 40th year this school term matching Washington-based embassies with classrooms in the D.C. Public Schools system.

In the 1970s, members of the WPAS Women’s Committee started the program as a way of supplementing world social studies lessons. The effort’s focus has largely stayed the same, as has the age group targeted — mostly sixth-graders with a small number of fifth-graders thrown in as well. Today, the program annually connects 1,500 students in some 50 schools throughout Washington with more than 50 embassies. In fact, during its four-decade span, more than 50,000 D.C. students have participated in the program.

To this day, “there is nothing else like it,” according to Bogash, who came into her position three and a half years ago. “It’s absolutely remarkable, and we couldn’t do it without the support of the embassies and ambassadors.” 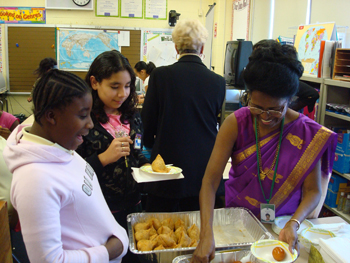 Each year, the Washington Performing Arts Society connects about 1,500 students from 50 schools throughout D.C. with more than 50 embassies as part of its popular Embassy Adoption Program, now in its 40th year.

Each year, serious planning and preparation begins in September when WPAS reaches out to the diplomatic community to see who would like to take part. The annual goal is always to bring in new countries. Shortly afterward, training begins for all of the teachers and ambassadors and diplomats who’ve signed up so that they can become acquainted with the goals and strategies involved.

Adopting a D.C. classroom is something Bogash and others in charge of the program don’t want embassies to take lightly. “We expect them to go into the class once a month at the very least,” she noted.

Once inside, the ambassador has a substantial amount of freedom to decide what subject matter to cover so long as basic guidelines are met. Therefore, the emphasis can be on the arts one day, culture another, history the next — so long as the aim is full exposure to that chosen country.

New this year, the Embassy Adoption Program will fall under the category of “Teaching and Learning” within D.C. Public Schools instead of coming to the school system through its Community Partnership arm. In Bogash’s eyes, this means teachers will be able to incorporate the diplomatic component even more seamlessly into the curriculum, treating the embassy guests as part of the required learning, not as an extra lesson. 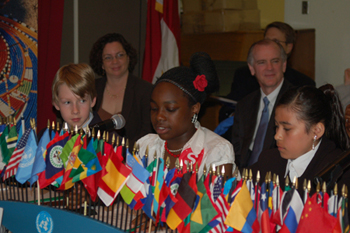 “It’s incorporated within the academic side,” she explained. “The nice thing is it’s considered to be in the Office of Bilingual Education.”

This jump is particularly appropriate given that a number of ambassadors choose to share their native languages with the students. Switzerland, for example, has three different languages within its borders, so the representative from that nation will come into his adopted class and give some insight into all of these tongues.

Often, ambassadors also spend time teaching the middle-schoolers their homeland’s national anthem. This singing of the national anthems is one component of the end-of-year presentations that students make at the actual embassies to cap off the program.

According to Bogash, these presentations are the epitome of creative collaboration. Classes decide together how best to demonstrate what they’ve learned. In years past, there have been poetry readings, slideshows and portfolios laid out for embassy guests to see. Bogash noted one particularly memorable presentation in which a class learned a traditional Indonesian dance and performed it at the embassy.

Over the past 40 years, the students have even been able to perform in front of top-level foreign officials. 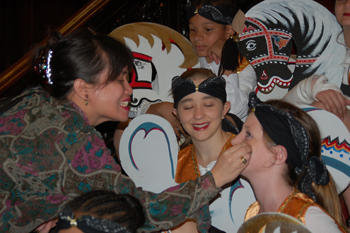 In the 1970s, the Women’s Committee of the Washington Performing Arts Society started the Embassy Adoption Program as a way of supplementing world social studies lessons. Today, the program has given more than 50,000 D.C. students, mostly sixth-graders, the chance to learn foreign culture directly from the city’s diplomats as an integral component of their classroom curriculum.

“A few years ago the students paired with Poland got to meet the first lady of Poland and do their presentation for her,” Bogash recalled. “Another time we had the princess of Denmark present.”

Another highlight of the Embassy Adoption Program each year is the mini United Nations gathering that allows all classrooms to come together and represent the countries they’ve spent so much time getting to know.

“They become representatives of their countries,” Bogash said. “They’ll discuss issues with global and environmental consequences from the perspective of their adopted countries. It’s very exciting for them.”

Currently the plan is to, once again, involve 50 D.C. classrooms in the effort this year. Bogash eventually hopes to grow the program but that’s dependent on funding, all of which comes from the Washington Performing Arts Society.