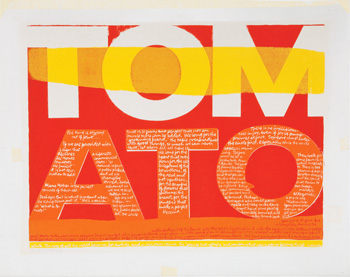 Sister Mary Corita elevated advertisements into artistic social commentary in works such as “the juiciest tomato of all.”

The two exhibits blaze two startlingly different paths, but there is a connection. The journey involved in going from the cumbersomely titled “Royalists to Romantics: Women Artists from the Louvre, Versailles, and Other French National Collections” to the electrically titled “R(ad)ical Love: Sister Mary Corita” seems like a long and torturous one if you want to connect the two exhibitions now at the National Museum of Women in the Arts, which is enjoying its 25th anniversary.

But you want to make the linkage in spite of the seemingly insurmountable differences between the two. Those differences are hardly nuanced: On the one hand, you have 35 female French artists working from 1750 to 1850, during the ascendancy of the ill-fated court of Louis XVI and Marie Antoinette, the rise of artistic salons, the disappearance of those salons amid the French Revolution, followed by the reign and fall of Napoleon, as well the restoration of the monarchy. Those were, to say the least, turbulent times in which a woman wanting to be an artist had to navigate the choppy waters of culture, religion, gender and politics to even be allowed to paint and play with the big boys. Some of these women, for example, may have been banned from formal training but flourished with the support of such aristocratic patrons as Marie Antoinette; others were subjected to accusations of sexual immorality simply for being artists.

On the other hand, Sister Mary Corita (1918-86) was very much a modern artist, even if she was a Roman Catholic nun restricted to some degree in what she could do, or communicate. Although the time and place were very different — Los Angeles in the 1950s and ’60s — like her French predecessors, Corita also shattered norms and defied stereotypes with her unique brand of pop art that boldly transformed slogans and designs from print advertisements, street signs, billboards and product packaging into artistic prints that conveyed spiritual and social messages of the era, from racism and poverty to the Vietnam War and culture wars.

From a distance, her work resembles the kind of art that Andy Warhol would have loved, absent his cynicism about the commerce of art that he manipulated so brilliantly. Looking at Corita’s work though, you have to wonder what Warhol or other pop gurus might have achieved if they glowed with the spiritual warming of her vision.

Sister Mary Corita (and Corita Kent after she left her order in 1968) was an art professor at the Immaculate Heart College in Los Angeles for more than two decades. Since the 1950s, the college was known for its progressive attitudes and innovative art department, but its liberal approach was further bolstered in 1962 when the second Vatican sought to modernize religious teachings. This shift gave rise to the “modern nun,” exemplified by Corita, who melded her art with social activism that mirrored the larger cultural protests of the time. 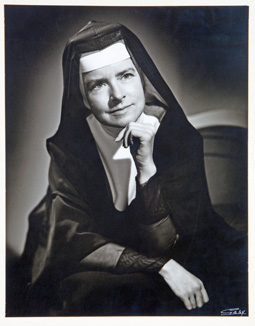 Like Corita, women in 18th- and 19th-century France had plenty of societal changes to reflect upon, although their working environment was considerably tougher.

The French exhibition features 77 paintings, prints and sculptural works from the Louvre, Versailles and other collections, many never before seen outside of France. These works tell a different story — about the fight of women artists to educate themselves, to work, to get noticed, and to be treated with the same seriousness as their male counterparts.

There are some recognizable names among the artists in “Royalists to Romantics,” including Sophie Rude, Anne Vallayer-Coster and Élisabeth Louise Vigée-Lebrun — the latter two appointed to court by their aristocratic patron, Marie Antoinette, who also advocated for their acceptance into the Académie Royale de peinture et de sculpture. These women rose through the ranks — and deservedly so. Vallayer-Coster’s flowers practically burn with the kind of deep colors rarely achieved by other artists.

The problem is that there are also plenty of less-recognizable names and paintings — the result of deft, arduous and complicated maneuverings. During the days of Louis XVI, women artists gained entrance into the highly selective and restrictive French salon based on personal connections.

With the collapse of the monarchy, art took a commercial turn whereby the marketplace became important absent the salon. Here, while perhaps more accepted, women faced fierce competition — and an equally unlevel playing field as before. For instance, most women could scarcely afford the standard artistic journey made by their male counterparts who traveled to Italy and other parts of Europe to paint and be bathed in the light of classical greatness. Plus, they had to deal with what was basically the prudish nature of revolutionary fervor, which disapproved of women artists altogether on moral grounds.

Another problem for women was that French cultural mavens simply would not accept women painting epic or historic subject matter, deeming that they lacked grandiose imaginations. Of course, this is hardly the case with the examples seen here by women such as Antoine Cecile Haudebourt-Lescot and especially Césarine Henriette Flore Davin-Mirvault and her impressive portrait of Askar Khan Afshar, the Persian ambassador to France circa 1808. There are also some exciting, haunting and evocative works here by Louise Josephine Sarazin de Belmont, Marguerite Gérard and Adrienne Marie Louise Grandpierre-Deverzy.

The sheer list of long, hyphenated names hints at a long-lost world where aristocracy billowed and then all but disappeared; where clothing came close to theatrical costume; and where the serenity of country landscapes or royal portraits belied the turbulence outside the frame. 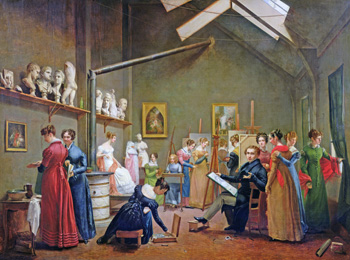 Adrienne Marie Louise Grandpierre-Deverzy’s “The Studio of Abel de Pujol,” were created during a time of upheaval in 1800s France.

Sister Mary was also inspired by her surroundings, though they look very different in her frame — or, to be exact, the serigraphs she created out of mainstream commercial advertising.

The 1960s pop culture of love, sex, drugs and rock ‘n’ roll seeped into everything, from radical leftist politics, to peaceniks and hippies, to the pervading commercialism seeking to exploit that cultural change.

Sister Mary Corita tapped into all of it — newspaper headlines about the Watts Riots, cereal boxes, television ads, slogans in Life magazine, lyrics by the Beatles, and poetry by E.E. Cummings and Langston Hughes. What emerged were spiritual odes, like a poke in the eye, to love, togetherness, tolerance and understanding. Perhaps because she was a nun, no one dared take her work lightly.

After all, not everyone can drop words like those in her 1966 print, “Come Alive; Tomorrow, the stars,” referring to the 1960s Pepsi ad that encourages consumers to “Come Alive, You’re in the Pepsi Generation.” Unlike the ad, however, Corita’s text suggests an awakening social consciousness, rather than a caffeine-sugar rush.

In her works, popular phrases became something else, bigger in thought and emotion. Alluding to a tomato company’s ad that claimed their tomatoes were the juiciest, she boldly stated, “Mother Mary is the Juiciest tomato of them all,” noting that tomato slang meant woman and angering the church at the time.

She once said: “The shape of ads and billboards are today’s forms. There’s nothing that’s ugly … if you notice and care about things, there is tenderness.”

In a way, the French women who doggedly pursued their art careers were inspired by a similar sentiment: We can paint anything that anyone else can paint, and nothing is out of bounds.

Royalists to Romantics: Women Artists from the Louvre, Versailles, and Other French National Collections